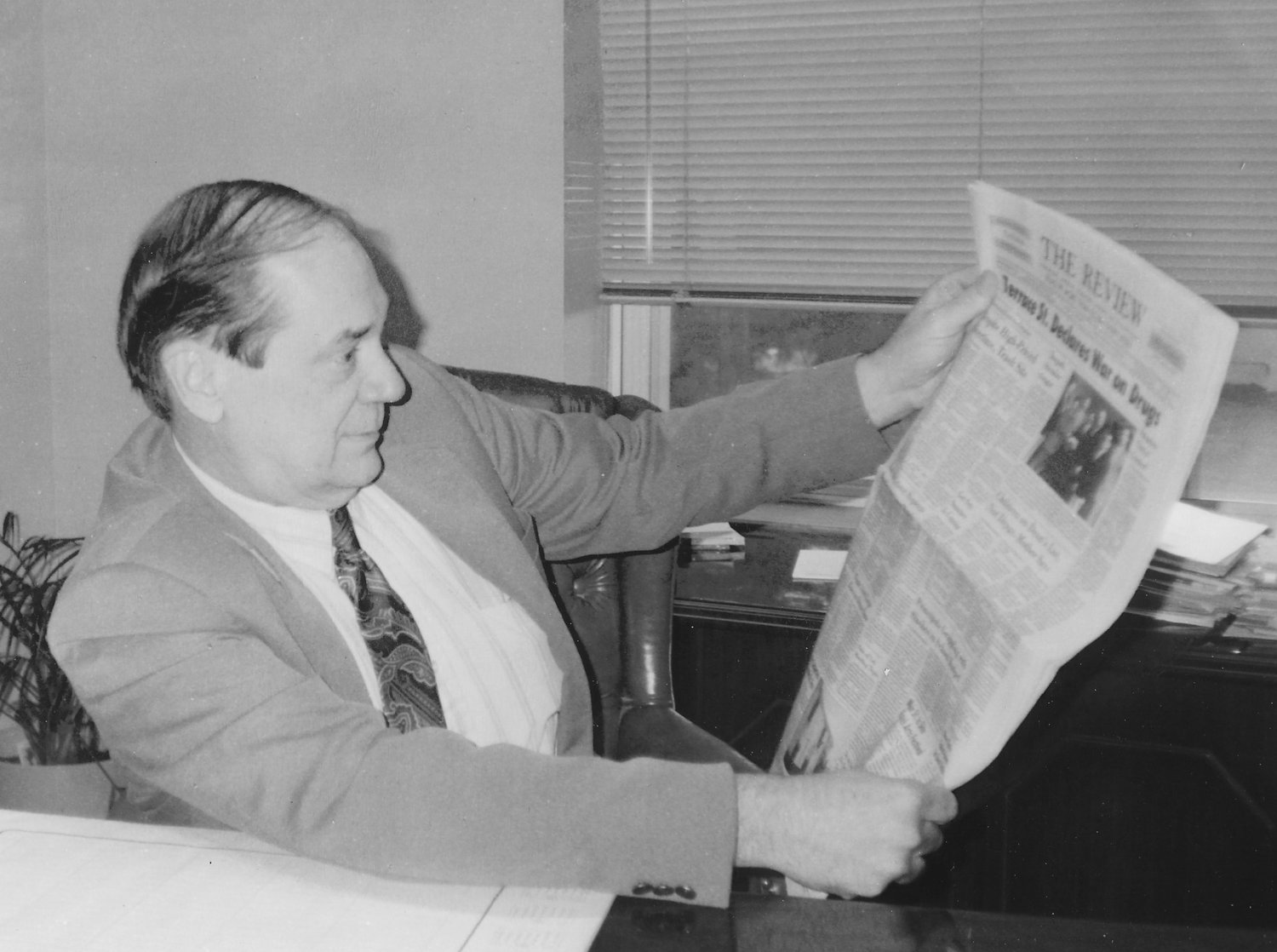 Fred Donaldson looks proudly at one of the many front pages he produced for the Roxborough Review. In addition to his distinguished 46-year journalism career, he was twice elected president of the Beth Tikvah B'nai Jeshurun synagogue in Erdenheim.
Posted Wednesday, July 20, 2022 4:45 pm
by Len Lear

Fred Donaldson, a fearless newspaper reporter, editor and beloved religious leader who served as president of the Beth Tikvah B'nai Jeshurun synagogue in Erdenheim, died May 31 of coronary artery disease while on a cruise in Ocean Cay, Bahamas. He was  80.

“On Aug. 31 of this year, Fred and I would have celebrated our golden wedding anniversary,” his wife, Linda, told the Local last week. “Nearly 50 years together, half a century. The man I loved was admired by many for his brilliance, cutting wit and abundant kindness.

“Fred had a unique gift for drawing people out in interviews or even social conversation. His almost psychic ability to ask a few questions and immediately touch upon one's most personal feelings brought out many stories folks had never related before … In the words of beloved children's author Judy Blume, 'Our fingerprints don't fade from the lives we touch.'”

A Philadelphia native and Central High graduate, Fred was unable to play sports as a child because of a heart condition, but he attended the local summer playground and learned checkers. At 12 years of age, he won the local checkers tournament and went on to win the citywide competition to become the Philadelphia checkers champion.

Fred became a copy boy at The Evening Bulletin right after high school in 1959. After six years on the job, he rose to become rewrite editor, a fact which was always a point of pride for him, according to his wife Linda. It was while working there that he earned the  nickname “Fearless Fred” from his editor, Charles Johnson, and his wife began calling him “Crusader Rabbit” after a TV cartoon character who was never afraid of a fight.

He then moved on to take a job at  Intercounty News Group, where he spent the next 40 years working in weekly newspapers, including the Roxborough Review, earning the nickname of  “The Dean of Weekly Newspapers.”

While there, he initiated many crusades over what he considered injustices and abuses of power, and often got results. For example, his feature story in The Conshohocken Recorder about the Philadelphia United Way's padded administrative salaries cost a few people their jobs, according to his wife Linda, and his editorial campaign about the poor condition of the Wayne Junction train station in Germantown — its poor lighting, numerous robberies, assaults and drug deals — prompted the city to significantly upgrade the station and make it more safe.

In the late 1970s, the newspaper group assigned Fred to a failing newspaper in a Black community, The Leader in West Oak Lane. In two years, he took it from a paper that was running a $200,000 deficit to one that had a $750,000 profit, building one of the Intercounty News Group's most successful newspapers. Fred later said he was most proud of the fact that his original all-Black staff stayed in their posts with him for more than 20 years.

Fred also mentored many young journalists, and two of his editorial cartoonists went on to national renown. He encouraged one of his reporters covering a true crime investigation to write a book, which did get published, his wife said.

Also an entrepreneur, Fred started a small printing business, LD Graphics, in the mid-1970s. He bought a press, a camera-to-film copy, plate processors, typesetting machines and bindery equipment. His wife typeset the copy and handled bindery. Fred developed the film and printed the jobs, all late into the night after working all day at a newspaper.

Donaldson was also president of Beth Tikvah B'nai Jeshurun in Erdenheim from 1983 to 1985 and again from 1988 to 1989. Valarie Hurwitz, the synagogue's current executive director, told us last week, “Fred's wisdom and forward thinking were unparalleled. I will always be grateful for the support he gave to me personally and to the synagogue at large. When his son, Ben, became a Bar Mitzvah, the Donaldson family donated all of the monetary gifts Ben had received to the synagogue. The Ben Donaldson Hay Class Fund was established.

“This fund is still in existence today and is used to send the B’nai Mitzvah class each year on a memorable trip to New York to visit the Jewish museums. Fred’s goal was to teach Ben the importance of 'tzedakah,' giving to others. May Fred’s memory always be a blessing.”

Fred was preceded in death by his parents, Frederick and Marie Donaldson, and his sister, Rose Mays. He is survived by his wife, Linda; his children, Adam, Noah, Jane and Benjamin; former wife, nee Judith Kaufthiel; six grandchildren; three great-grandchildren and other relatives.

Samples of Fred's journalism can be found at freddonaldson.com. Len Lear can be reached at lenlear@chestnuthilllocal.com