Barring any legal challenges that could change the map, Chestnut Hill’s current State Representative, Chris Rabb, will no longer represent the majority of Chestnut Hill once the map goes into affect. 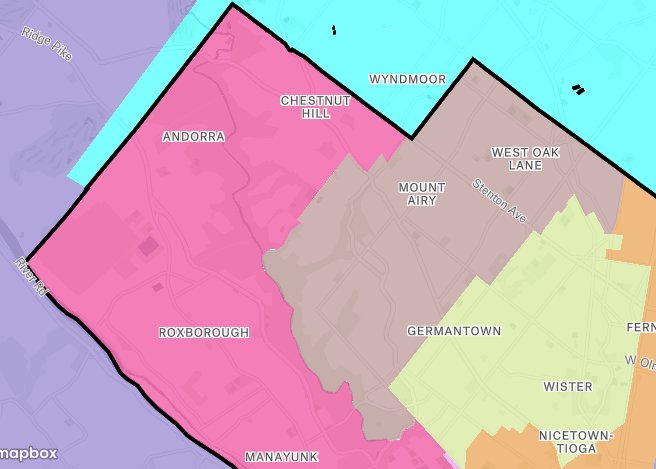 A map of the final State House districts in the upper Northwest, which shows Chestnut Hill included in the same district as Roxborough and Manayunk. The districts will become official barring any successful legal challenges. (Photo taken from District Builder screenshot)
Posted Wednesday, February 9, 2022 6:00 am
by Tom Beck

The Pennsylvania Legislative Reapportionment Commission approved the final map for the Pennsylvania House of Representatives on Friday, creating a State House map that puts Chestnut Hill in the same district as Roxborough, and lumps Mt. Airy in with Stenton.

Rabb said he thinks the final result can be good for both Mt. Airy and Chestnut Hill.

“I am so proud of my fellow Mt. Airy residents who wrote letters and signed petitions to keep this historic community intact,” Rabb told The Local. “While the majority of Chestnut Hill will no longer be in the 200th district, it will have two state reps advocating for it in the new legislative session starting in December.”

Rabb also said he was “excited to be representing all of West Oak Lane versus the small portion I served my first three terms in office.”

It does mean some political headwinds may be coming his way next voting day.

“Unfortunately,” he added, “that means that I will have the unique misfortune of being among a pair of Democratic incumbents out of 90 of us forced to run against a fellow state lawmaker, Rep. Isabella Fitzgerald, ward leader of the 10th Ward Democratic Committee.”

Fitzgerald told the Local she is “looking forward to continuing my service to an expanded legislative district.”

“My advocacy is for community safety, women’s health issues, common sense gun control, economic development and protecting small businesses,” she continued. “I look forward to having in depth conversations and dialogue with the constituents of the new 200th legislative district.”

While the final districts have changed from the preliminary ones from last month, they still separate Chestnut Hill and Mt. Airy, two communities of interest that had been together since the 2000s.

“It’s just a simple walk across Cresheim Valley Drive,” Chestnut Hill resident Hillary O’Carroll said of Mt. Airy. “If I can’t find something in Chestnut Hill, I can find it in Mt. Airy, but I never go to Manayunk and I never go to Roxborough really. I don’t really know anybody in Roxborough or Manayunk.”

Statewide, the new map is expected to be much more nonpartisan than in years past, upsetting Republicans who many experts say had the state gerrymandered in their favor. According to the Inquirer, 94 of the current House districts voted for Joe Biden in 2020 and 109 voted for Trump, despite Biden narrowly winning Pennsylvania. In the new map, 103 districts voted for Biden and 100 for Trump.

Friday marked the beginning of a 30-day period in which legal challenges can be filed against the map. According to Spotlight PA, legal challenges are likely to come from Pennsylvania Republicans who are unhappy with the plan.

“By virtually any measure, these are very good maps that are fair, that [are] responsive to the requirements of the law, and that will serve the people of Pennsylvania well for the next ten years,” said the redistricting commission’s chair, Mark Nordenberg. “There also is no such thing as a perfect process. What I can say, though, is that no one involved in this effort just wanted to get the job done. Instead, we wanted to do the job well, and I believe we have succeeded.”