Ryan Gosling and Emma Stone dance in "La La Land." by Bill Wine Each week, veteran film critic Bill Wine will look back at an important film that is worth watching, either for the first time or … 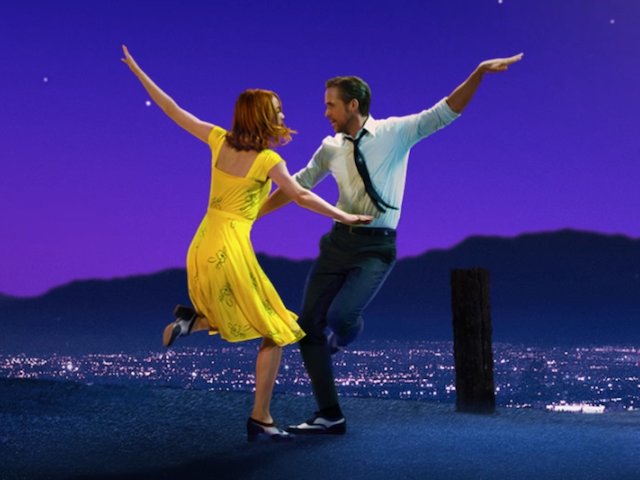 The title may look and sound like someone stuttering, but "La La Land" is a joyful, smoothly delivered triumph from first frame to last.

What you feel like when you exit is that you’ve just had the best time you could possibly have had watching a movie.

Hooray for everyone involved in this musical, magical gem. Or so say I.

Which is why it's so surprising for those of us who swear by this movie to discover that it seems to divide the audience into lovers and haters.

Released in 2016, "La La Land" is an ultra-romantic musical dramedy, with an aspiring actress played by Emma Stone and a frustrated jazz pianist played by Ryan Gosling falling for each other in a flick that is, among other things, a love letter to Los Angeles.

It’s at once an old-fashioned song-and-dance flick as well as a time-capsule representation of modern-day life in the City of Angels. Or, more specifically, Hollywood, otherwise known as Tinseltown or The Dream Factory.

And it’s about the difficulty – especially for those of an artistic bent – of turning a dream into a reality.

Well this movie itself is a dream, all right, full of heart and heartache. But it didn’t come from a factory.

It came from a young filmmaker whose previous outing, 2014’s "Whiplash," was terrific, nominated for five Oscars and the winner of three.

There was no way, we told ourselves in advance, that Chazelle could possibly outdo that showing with his next project, "La La Land," the script for which he had written before he made "Whiplash."

But, astonishingly, he did. And by plenty.

Then there are Oscars for best director, cinematography, musical score and song.

But keep your eyes on the performers as well. Best Actress Oscar winner Stone is Mia, Best Actor nominee Gosling is Sebastian. Hers is a consummate turn, his an offering of easy charm incarnate. And both are funny when they need to be. These two young stars had worked together twice before, in "Crazy, Stupid, Love" and "Gangster Squad." So they have a confident, unforced, persuasive romantic chemistry, playing performers in love whose dreams get in the way of their feelings for each other.

They sing, they dance and they romance. They know they’re not Astaire and Rogers, but they’re plenty good enough on their tapping and gliding feet. And, yes, that’s their voices and their dancing limbs and his fingers tickling those ivories.

They hold us in their sway from their meet-cute moment until, well, whatever it is that eventually happens – which may not be what you expect, no matter how predictable you consider the genre.

But you can trust Chazelle’s decision-making once you’ve experienced the lift-you-out-of-your seat opening number, set on the 105 Freeway; once you’ve noticed how much Chazelle was influenced by the films of director Jacques Demy ("The Umbrellas of Cherbourg"); once you’ve heard the glorious, can’t-get-it-out-of-your-head music, including six original songs, by composer Justin Hurwitz; once you’ve heard the smooth-as-silk lyrics by Benj Pasek and Justin Paul; once you’ve experienced just a taste of the film’s immense charm and fantastical romanticism; and once the film ends and you immediately start looking forward to seeing it again.

Will this instant classic rescue the dormant original musical genre – that is, musicals not based on a stage show or some preexisting property? Stay tuned.

And don’t be surprised if, the first time you hit the streets after experiencing "La La Land," you find yourself tap dancing in the sunshine or – wait for it – singin’ in the rain.