Flix: A look back at ‘Young Frankenstein’

Gene Wilder (left) and Peter Boyle in “Young Frankenstein.”[/caption] by Bill Wine This is the first in a regular series of columns by veteran film critic Bill Wine, in which he’ll look at …

Flix: A look back at ‘Young Frankenstein’ 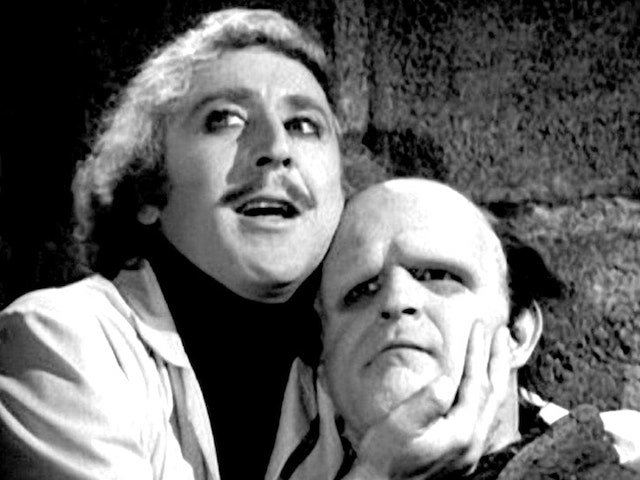 This is the first in a regular series of columns by veteran film critic Bill Wine, in which he’ll look at movies both old and new for cinephiles.

The filming of Mel Brooks’ beloved monster-movie spoof, “Young Frankenstein,” had just been completed in 1974 when Peter Boyle, the late actor who co-starred as the re-created monster, returned to his native Philadelphia for a lunchtime interview near Rittenhouse Square.

“I had one day off a week,” Boyle told me, his grin widening as he recalled the specifics. “And each week, I would wake up and ask myself where I could go for the day to have the most fun.

“Then I would go to work. A Mel Brooks set was like no other.”

At which point he would join Brooks, Gene Wilder, Teri Garr, Marty Feldman, Madeline Kahn, Cloris Leachman, Kenneth Mars and Gene Hackman, and attempt to keep a straight face and a quiet demeanor against impossible odds.

Lest you think he was merely priming the publicity pump, try screening this irresistible comedy and keeping a straight face. It can’t be done.

That’s because Brooks rounded up and turned loose – but not too loose – as perfect a comedy ensemble as you’ll find anywhere, with each of them appreciating their colleagues’ talent, having themselves a thespian ball and issuing a textbook demonstration of comic timing and energy.

A sendup of the early Universal horror thrillers, “Young Frankenstein” features Boyle’s creature as a large sorta-man whose vocabulary is essentially the letter “M.”

Wilder – who co-wrote the script with Brooks that earned them an Oscar nomination for Best Adapted Screenplay – plays the mad brain surgeon who inherits the family castle in Transylvania. Additionally, with Feldman as the hunchback (“What hump?”) whose name is pronounced “Eye-Gore,” Garr as the rollin’-in-za-hay lab assistant, Kahn as the strict fiancé (“No tongues”), Leachman as the horse-upsetting housekeeper, Frau Bleucher, and Hackman as the accommodating blind host, what’s not to laugh at and love?

The laughs are frequent and boisterous, to be sure. But it’s Brooks’ obvious fondness for the source material – Mary Shelley’s gothic tale – and early James Whale films, his ability to pay tribute while simultaneously poking fun and his painstaking attention to production detail (for example, his use of the actual, original lab equipment that director James Whale used in the 1930s), that makes the film so ridiculously watchable and so darn lovable.

Few movies have the number of indelible highlights that this rich romp, easily Brooks’ most cohesive and sustained project, tosses off like so much confetti. But even if that were not the case, the song-and-tap-dance number involving Wilder and Boyle to perhaps the most nasal rendition of “Puttin’ On the Ritz” ever recorded, even out of context, will cling to your brainpan like nobody’s business.

And the featured, uncredited cameo by Hackman, a respected, serious actor wanting to give comedy a try, is – who knew? – flat-out hysterical.

Spoofmeister Brooks delivers this audience-friendly farce with the kind of care and restraint with which he’s not usually associated. But it’s as subtle as it is outrageous, as disciplined at it is inspired, as surprising as it is satisfying and as admirable as it is giggle- worthy.

And thus did it find itself sitting at number 13 out of 100 in the American Film Institute’s turn-of-the-century list of the greatest comedies of all time.

If royal, gut-busting entertainment is not enough and you also want intellectually respectful thematic exploration, it’s still there for the taking. Immortality, scientific creativity, identity, madness and Brooks’ abiding obsession with the father-son relationship are all touched upon.

Bill Wine is an Emmy-winning film critic who served in that capacity for television station WTXF and radio station KYW Newsradio in the Philadelphia market. He was also a tenured professor of Communication at La Salle University as well as a produced and published playwright. He lives in Chestnut Hill.

Hill manager a singing star in other languages

Isabel Catalan’s first public reading was a big one

Germantown pair coaxes heart and soul into their photos