Flix: ‘Concussion’ is a powerful statement that failed to score with the public

Will Smith as Dr. Bennett Omalu in “Concussion.”[/caption] by Bill Wine Each week, veteran film critic Bill Wine will look back at an important film that is worth watching, either for the first …

Flix: ‘Concussion’ is a powerful statement that failed to score with the public 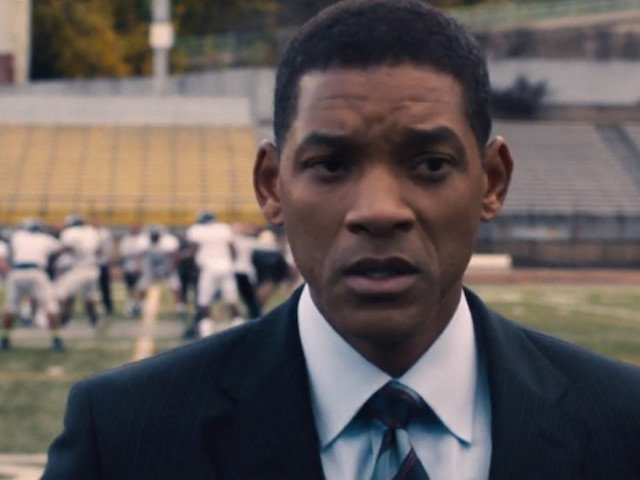 Will Smith as Dr. Bennett Omalu in “Concussion.”[/caption]

With football season upon us, how about a glance back at a powerful but criminally ignored pigskin movie?

On the surface, “Concussion” might be called a football flick. It is, after all, about the familiar violent contact sport that holds sway among rabid fans across this country.

But that whistle you hear is not coming from an official, although the zebras will come into play at some point.

Instead, “Concussion” is about another form – a more urgent and dramatic form – of whistleblowing as a highly credentialed pathologist tries to discover and tell the truth about brain damage among football players who routinely experience repeated concussions during their playing careers.

Based on a true story, “Concussion” focuses on Dr. Bennet Omalu, an immigrant chasing the American Dream played by Will Smith – who wisely dials down the movie-star charisma and delivers an accented performance that is measured but appropriately driven and intense. Omalu is a forensic neuropathologist from Nigeria working in Pittsburgh.

When the corpse of retired professional football luminary Mike Webster, played by Chestnut Hill’s own David Morse (Webster played for the National Football League’s Pittsburgh Steelers and Kansas City Chiefs in a career that included four Super Bowl victories) lands on Dr. Omalu’s autopsy examination table in 2002, the physician – no football fan he – wonders why the 50-year-old Hall of Fame athlete had sold his Super Bowl rings, why he was homeless and living in a truck, why he had engaged in self-mutilation, and why he had been diagnosed with premature Alzheimer’s.

Initial speculation suggests a condition similar to dementia pugilista, a disease seen in a number of boxers as a result of receiving repeated blows to the head.

Omalu publishes his findings in the journal “Neurosurgery” in collaboration with his boss, chief medical examiner Dr. Cyril H. Wecht, played by Albert Brooks. A follow-up study ensues, and other victims of the degenerative brain disease, “chronic traumatic encephalopathy” (CTE), turn up. Then the researchers are joined by former Steelers team physician Dr. Julian Bailes, played by Alec Baldwin.

Omalu proceeds, confident that the NFL – described at one point as “owning a day of the week, the one that used to belong to the church” – will be grateful for his findings and warnings, and act accordingly.

Boy, is he wrong.

Not only do NFL execs, led by Commissioner Roger Goodell (Luke Wilson), not shower him with praise, they carry out a smear campaign to discredit him as a quack and undermine the validity of his findings, and they harass and threaten him and his wife, Prema Mutiso (Gugu Mbatha-Raw), which is at least part of the reason that the couple relocates to Lodi, California.

At least according to the script by writer-director Peter Landesman (“Parkland”), based on a GQ article entitled “Game Brain” by Jeanne Marie Laskas, which doesn’t take us much beyond the surface of a controversial topic with which we're already familiar.

But although the film doesn’t let the antagonistic and territorial NFL execs off the hook, it doesn’t exactly vilify them either. If the NFL fumbled, it fumbled. And given the seriousness of the issue at hand, perhaps a more accusatory tone would have allowed this sober a film to land more of a blow.

Yes, there’s a glancing reference to Big Tobacco in the 1990s, but the parallel to what we might call Big Tackles hardly registers in this lone-crusader piece and it probably should have.

That is, as a conversation starter or a wakeup call, “Concussion” should be it’s-about-time acknowledged and it’s-well-made respected. But there’s undoubtedly a stronger case to be made. If only, goes the bitterly ironic refrain, it was more hard-hitting.

Then “Concussion” might have landed and registered much more impactfully.

Or, in football parlance, it might have been a touchdown rather than merely a field goal, but one which we’ll gratefully take anyway.