Michael Keaton as McDonald’s founder Ray Kroc.[/caption] by Bill Wine Each week, veteran film critic Bill Wine will look back at an important film that is worth watching, either for the first time … 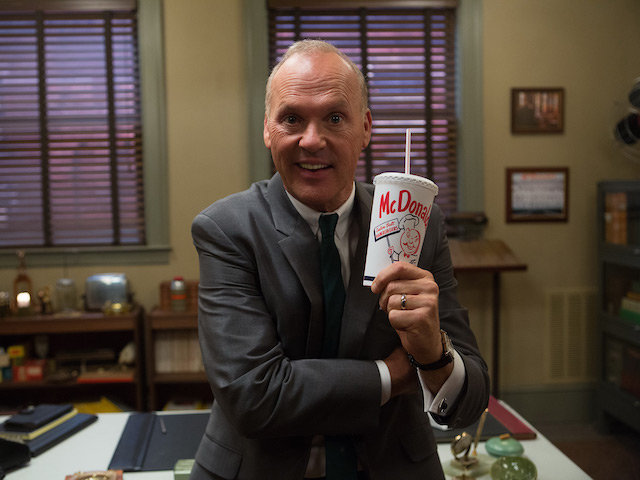 As the only actor recently involved in two consecutive Best Picture Oscar winners – “Birdman (or The Unexpected Virtue of Ignorance”) in 2014 and “Spotlight” in 2015 – Michael Keaton had a lot to live up to in “The Founder.”

And while that lead role did not snare him an Oscar nomination, as did his great work in “Birdman,” it is still an accomplishment that makes his already impressive resume that much more interesting.

Keaton broke through in television comedy, then came to the big screen in popular movie comedies such as “Night Shift,” “Mr. Mom” and “Beetlejuice.”

But it was his title roles as the Caped Crusader in Tim Burton’s 1989 “Batman” and the sequel, “Batman Returns,” three years later that established him as a unique presence.

Then he more or less walked away from stardom.

Now he’s back, bringing his combination of live-wire energy, compelling edginess, and acute comic timing to roles that call for all three.

As in “The Founder,” a biographical drama in which he stars as Ray Kroc, often identified as the man who founded the largest fast-food corporation in the world: McDonald’s.

But, as the film makes plain, that wasn’t exactly what happened.

After all, it is largely because of Kroc that the McDonald’s advertising slogans down through the years are so familiar to us: “Look for the golden arches”; “You deserve a break today”; “I’m lovin’ it”; “Two all-beef patties, special sauce, lettuce, cheese, pickles, onions on a sesame-seed bun.” Just to name a few.

Whether our being able to recognize them is a good thing, a bad thing, or an indifferent thing we’ll leave up to you.

As for Kroc, he was a struggling milkshake-dispenser salesman in Illinois who, obsessed with the model of instant-gratification meals and snacks that Mickey D’s represents, goes on to work as a franchising agent for the McDonald brothers, Dick and Mac, played respectively by Nick Offerman and John Carroll Lynch. It was they who founded and ran the hamburger joint named for them in southern California.

But given Kroc’s various skills as a salesman selling the biggest idea he’s ever had, the reserved and principled McDonald brothers are David to his Goliath.

And they do indeed eventually sell the business to bullying business exec Kroc, who convinces them to franchise their relatively modest operation and in 1961 takes out a second mortgage on his house without telling his first wife (Laura Dern).

Which is just another way of saying that, championing economical shortcuts and quality-control compromises that the brothers are unwilling to stoop to, Kroc steals it right out from under them via cutthroat corporate conniving.

And under his leadership, the Happy Meal emporium that started as a single location in San Bernardino, California, will turn into a multi-billion-dollar global phenomenon spreading across 118 countries, transforming the way we eat and turning us into Fast Food Nation.

Furthermore, it will become the world’s most profitable restaurant franchise, and enable Kroc to go on to own a professional baseball team in the San Diego Padres.

Naturally, the on-screen Kroc has, thanks to Keaton, enough charm to get him through whatever doors he feels he needs to get through, his often abominable behavior notwithstanding. But Keaton makes sure, after getting us to root for motormouth huckster/hustler Kroc as an underdog everyman in the early going, to show us the dark side of entrepreneurial capitalism as well, characterized here by Kroc’s ruthless manipulativeness and guided-missile determination – whether dealing with competitors or collaborators.

Director John Lee Hancock (“Saving Mr. Banks,” “The Rookie,” “The Blind Side,” “The Alamo”) works from an original screenplay by Robert D. Siegel that takes a fascinating peek behind the curtain surrounding the business world while painting a complex portrait of either a lovable villain or a despicable hero.

And Keaton has the magnetism to compel us without repelling us, to keep smiling and refuse to look away from him even as we check that our wallets are still there.

Tasty if not quite filling, “The Founder” doesn’t flounder because Keaton is solid as a Kroc.