Rosamund Pike was nominated for a Best Actress Oscar thanks to her fantastic performance in "Gone Girl." by Bill Wine Each week, veteran film critic Bill Wine will look back at an important film … 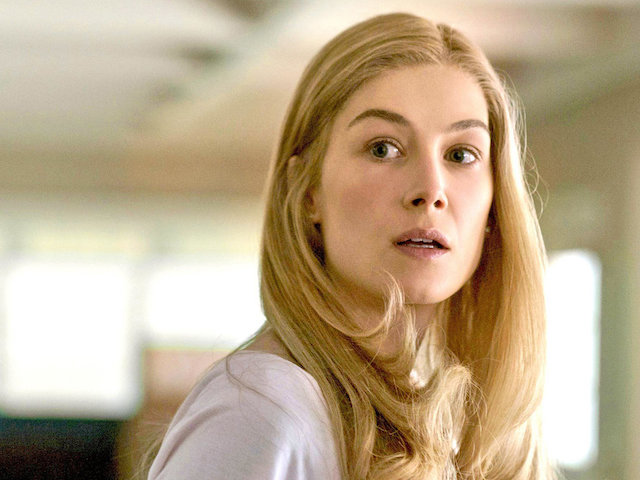 Rosamund Pike was nominated for a Best Actress Oscar thanks to her fantastic performance in "Gone Girl."

The novel was a page-turner, and the movie is a barn burner.

The film version of “Gone Girl,” the 2012 bestseller by Gillian Flynn, is a gripping, cynical, perverse and sometimes intoxicating look at marriage as a Punch and Judy Show. But the question is: Who’s punching whom?

Amy Elliott Dunne, played by Rosamund Pike, disappears on the day of her fifth wedding anniversary.

The police and the media probe, but she just doesn’t turn up As the days go by, her husband, Nick, played by Ben Affleck, now a bar co-owner, looks more and more like a prime suspect.

We get this married couple’s backstory of wedded bliss turning into a wedded blitz through flashbacks, from their ardent courtship and their New York City writing careers to their recession-era layoffs, money troubles and relocation from a Brooklyn brownstone to a Missouri mess in the fictional town of North Carthage, which New Yorker Amy never really takes to liking.

Neither husband nor wife could really be described as likable. Maybe just the opposite.

What world-class director David Fincher (“The Girl with the Dragon Tattoo,” “Seven,” “Fight Club,” “Zodiac,” “The Social Network,” “The Curious Case of Benjamin Button” – the last two earning him Oscar nominations as Best Director) has gone and done is worked from a screenplay by author Flynn that condenses the narrative but pretty much preserves it, telling the story from both perspectives just as the novel did. We ultimately get two unreliable narrators for the price of one.

Fincher has also embraced the cynicism and dread embedded in Flynn’s premise, making the director and screenwriter, as opposed to the husband and wife under the microscope, seem like a very good match.

As dread-filled satires of modern marriage go, this one – which begs the question, “Just how well do you think you know your spouse?” – is a doozy.

Furthermore, as insinuating satires of our contemporary media culture go, this one – which begs the question, “What kind of scandal gets your attention on TV news?” – is also a doozy.

And, perhaps most satisfyingly for the audience, as a deliverer of secrets, lies, twists, reversals, implausibilities and surprises – none of which will be further alluded to here – this movie is also a doozy.

As for the two figures atop the wedding cake whom we would seem to be getting to know up close and personal, well, there’s more to them than meets the eye. Or is it less?

Not only does Fincher get commanding and compelling performances from leads Pike and Affleck, but he scares up invaluable supporting turns from Carrie Coon as Nick’s twin sister, Kim Dickens as the lead detective on the case, Tyler Perry as Nick’s high-profile attorney and Neil Patrick Harris as a persistent suitor of Amy’s.

Affleck and Pike, who received an Oscar nomination as Best Actress for her troubles, show us the performance aspect of matrimony as only skilled actors can pull off. Affleck did so by underplaying and letting us recall his particular career arc and making of that what we will, while Pike pulled off the more emotionally demanding role by showing us aspects of her persona we’ve never seen before.

Will the level of cracked absurdity and over-the-top brutality in the last reel be a bit much even for viewers happy to be along for the ride? Maybe. But by then, we’re long since, well, married to the proceedings.

So we’ll have and hold from this day forward yadda yadda yadda. The down-and-dirty, chilly and elegant missing-wife thriller, “Gone Girl,” holds us in its sway as it poses the mischievously misanthropic and malicious marital question, “What have we done to each other?”