Flix: ‘Nightcrawler’ is a fascinating look at a psychopath turned crime scene entrepreneur

Jake Gyllenhaal is the creepy, psychopathic Lou Bloom in “Nightcrawler.”[/caption] by Bill Wine Each week, veteran film critic Bill Wine will look back at an important film that is worth …

Flix: ‘Nightcrawler’ is a fascinating look at a psychopath turned crime scene entrepreneur 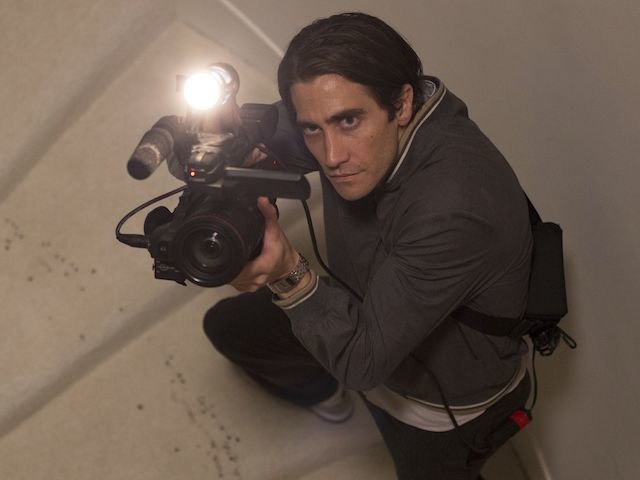 Jake Gyllenhaal is the creepy, psychopathic Lou Bloom in “Nightcrawler.”[/caption]

He’s only got one Oscar nomination under his belt so far, but Jake Gyllenhaal still has a long way to go

In an eclectic array of films, including “Donnie Darko,” “October Sky,” “Brokeback Mountain” (bringing him an Oscar nod for Best Supporting Actor), “Jarhead,” “Zodiac,” “The Good Girl,” “Love and Other Drugs,” “Source Code,” “Prisoners,” “Enemy” and “End of Watch,” he has exhibited considerable range, energy, restraint and discipline.

So he’s been fine a number of times, but never better than he is in the contemporary, after-hours thriller, “Nightcrawler.” His single-minded, relentless and amoral Louis Bloom is an antihero for the ages.

At the outset, scavenger Bloom is a between-jobs motormouth hustler who, while ghoulishly sneaking around fencing stolen goods, that he stole, discovers the phenomenon of nightcrawling in Los Angeles. He sees a freelance crime photojournalist of sorts, played by Bill Paxton, shooting news video at the site of a latenight car crash that he will soon sell to the highest-bidding news operation among local TV stations.

So Louis – who, if he’s not a vampire, would appear to be an insomniac – wheels and deals until he is in possession of a camcorder and a police scanner. He takes on a desperate, even-lessqualified-than-he-is assistant, Rick (Riz Ahmed), as a ridealong intern and begins chasing overnight news stories – stabbings, car accidents, fires, murders, whatever – as an ethically bankrupt videographer.

And he’s got an absolute knack for it, as he spends his sleepless nights cruising the mean streets of nocturnal L.A. and speeding around to make money. Most of it comes from Nina Romina, the desperate news director of L.A.’s lowest-rated, early-morning news show, played by Rene Russo, who describes the ideal newscast as “a screaming woman running down the street with her throat slit.”

On the job, Bloom can’t stop sharing career advice, self-help jargon and tips for success that he has gleaned from the internet, his college of choice and carefully, if not maniacally, memorized.

Gyllenhaal’s fascinating portrait, one for which he slimmed down considerably, is of a monotonic speechifier, ambitious entrepreneur and sociopathic manipulator willing to lie and withhold information from the police, rearrange a crime scene to make it more photogenic, resort to blackmail, negotiate the price of anything, no matter how personal, and place colleagues in harm’s way. In short, whatever it takes to get the footage he needs to make a sale.

“Nightcrawler” marked the debut of writer-director Dan Gilroy (Russo’s real-life husband), who received an Oscar nomination for Best Original Screenplay. He also wrote the screenplays for “The Bourne Legacy,” “Two for the Money,” “Real Steel” and “The Fall,” and works with his brothers Tony and John, who serve as his producer and editor, respectively. The script plays out as a satirical cautionary tale about, among other things, the “If it bleeds, it leads” state of sensationalistic broadcast journalism, but with a slyly dark sense of humor that keeps the film on this side of the pretentiousness fence.

And Gilroy generates an impressive amount of suspense, which is all the more surprising when you consider that the protagonist does not have our rooting interest. Yet we’re ultimately invested in the world being depicted, because it’s ours.

We do, it turns out, wait in vain for a backstory that explains just how Louis came to bloom. Not that he changes much from start to finish, but his achievement in search of his fame-and-fortune dream certainly allows him to reveal himself to us in all his gory glory.

But everything’s jake, because Gyllenhaal is splendidly commanding and perversely amusing in a rogue role so dominant, the character study could easily have been titled “Louis Bloom.”

“Nightcrawler” is a haunting all-nighter with dangerous, astonishing, compelling and, gulp, successful Louis Bloom leaving and leading us to wonder just what it was that he crawled out from under.