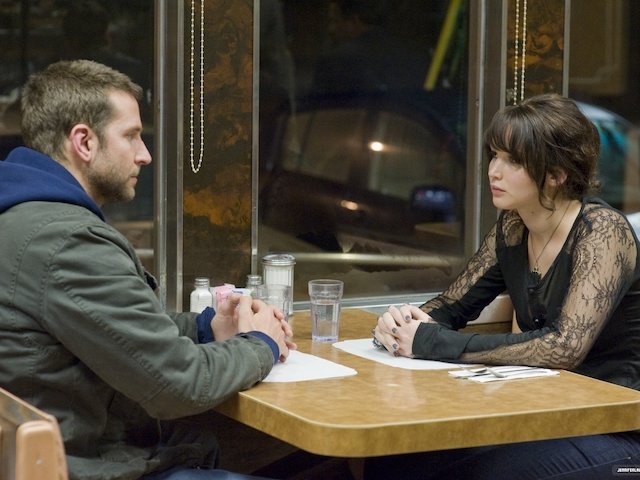 “Silver Linings Playbook” is an edgy romantic dramedy about emotional trauma and the healing power of love.

Bradley Cooper plays Pat Solitano, a former high school English teacher from suburban Philadelphia with bipolar disorder who has just spent eight months in a Baltimore mental institution, and has moved back in with his parents (Robert De Niro and Jacki Weaver).

Looking for the silver lining is his new philosophy, but he continues to attempt to reconcile with his estranged ex-wife, Nikki (Brea Bee), despite her disinterest and his parents’ protestations.

This will not be easy, of course, given that his ex no longer loves him and still has a restraining order, following his assault of the fellow teacher with whom she was having an affair.

But restraint just isn’t in the cards.

And when he asks her help in contacting the ex-wife he continues to pine for, what does she ask in exchange? That they train for and enter a local dance competition.

That provides the climax for this delightful, character-driven piece, which was Oscar-nominated for Best Motion Picture, nominated for Oscars in eight categories, and was blessed with a quartet of sterling performances.

Best Actor nominee Cooper gets to demonstrate range and depth and he’s more than up to the task here, not undermining his character’s psychological problems by sugarcoating them with surface charm in order to endear him to us.

The exuberant and impressive Lawrence won the Oscar for Best Actress as Cooper’s love interest, and De Niro and Jacki Weaver were both nominated as Pat’s exasperated parents.

Lawrence continues to appear skilled, sharp, and knowing far beyond her years and experience. And she and Cooper build and deliver their romantic chemistry in an idiosyncratic but absolutely effective and winning way.

Local sports fans will get a kick out of what De Niro does with his role as a bookie and a die-hard, combative Philadelphia Eagles fan who has been banned from their games for fighting. The two-time Oscar winner (“The Godfather: Part II,” “Raging Bull”) looks more comfortable, engaged, and inspired than he has in years. And he’s ably supported by Weaver.

Writer-director David O. Russell (“Flirting with Disaster,” “Three Kings,” “I Heart Huckabees,” “The Fighter”) who was nominated for an Oscar for Best Director and Beat Adapted Screenplay, has adroitly adapted the 2008 seriocomic novel by Matthew Quick and sprinkled fascinating details and classic one-liners throughout his film like so much confetti on New Year’s Eve.

“Silver Linings Playbook” is ferociously intimate, with lingering closeups that only a director confident in the abilities of his players would depend on, boasting sparkling dialogue that has you hanging on every word, and superb acting that has you scanning every facial expression.

What an exhilarating pleasure.

And what a trifecta: Cooper, Lawrence and De Niro are real and funny and poignant. When three actors delivering perfectly pitched performances whom you can’t take your eyes off operate in the same frame, what you have is a marvelous concoction that manages to be decidedly offbeat and conventionally crowd-pleasing at the same time.

The likably eccentric “Silver Linings Playbook” is certainly one of the decade’s most enjoyable movies.