Flix: 'Spotlight' – A great film that reminds us of the importance of reporting

Flix: 'Spotlight' – A great film that reminds us of the importance of reporting 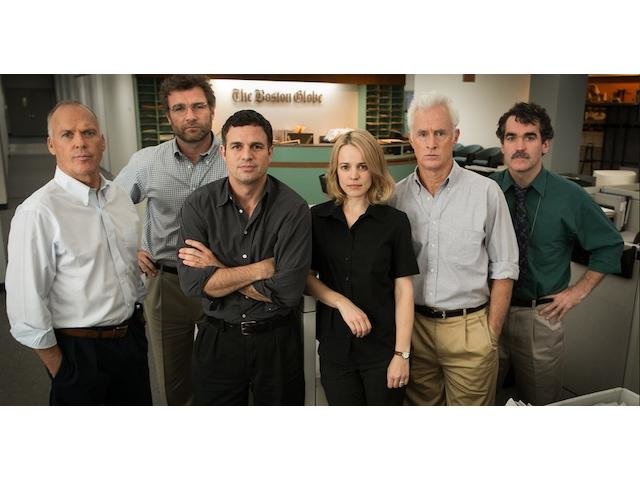 Anyone already saddened by what sometimes seems to be the imminent death of investigative print journalism to the accompaniment of all those “fake news” accusations might be further saddened in that regard by “Spotlight.”

This terrific journalistic drama shines a spotlight on “Spotlight,” the journalistic team that uncovered the massive child-molestation scandal and cover-up within the local Catholic Archdiocese in Boston and won the 2003 Pulitzer Prize for Public Service for the Boston Globe.

In doing so, it celebrates the power of the press and captures the mundane day-to-day toil, a form of quiet heroism, of newspaper reporters, practicing a form of journalism that is, as we speak, threatened with extinction.

In January 2000, a team of investigative journalists working at the Globe published the beginning of an expose series about the sexual abuse of children by priests in the Catholic Church.

As a result of the initial publication of the story, hundreds of victims throughout the world were encouraged to come forward and speak out.

Director Tom McCarthy (“The Station Agent,” “The Visitor,” “Win Win,” “The Cobbler”), who co-wrote the Oscar-winning screenplay with Josh Singer, uses the slow-build approach to take viewers through the process so as to understand both how these workaday journalists accomplished what they did and why it took them so long to do it.

McCarthy’s understated dramatic approach, his avoidance of sensationalism and – instead – concentration on the ho-hum grunt work done in the journalistic trenches in the name of breaking through levels of power and authority, allows the ultimate good-versus-evil thrust of the story to register with even more unforced impact.

Like the actual journalists being portrayed, the cast comprises a true ensemble: there are no star turns here, nor should there be.

What the “Spotlight” scribes uncovered in what is also a detective drama of sorts that builds momentum as it seeks proof that pedophilia was a rampant problem among the clergy and that the code-of-silence cover-up of this epidemic of abuse reached as high as the archbishop.

To mention that the film brings to mind the film “All the President’s Men,” whether or not “Spotlight” reaches quite that level of accomplishment, is among the highest of compliments for a film that never strikes a false note.

Which is what we were being told by the 2015 film’s two Oscars – for Best Picture and Best Original Screenplay – and half-a-dozen Oscar nominations – including Best Director (McCarthy), Best Editing, Best Supporting Actor (Ruffalo) and Best Supporting Actress (McAdams).

Speaking as a memo from the Movies That Matter Department, do not miss this welcome reminder of the important role to continue to be played by the news media.

A gripping journalistic procedural drama as well as an authentic and uplifting depiction of modern-day journalists, “Spotlight” is a well-told story that needed, still needs and will always need to be told.