Amy Adams near one of the mysterious spaceships in “Arrival.”[/caption] by Bill Wine Each week, veteran film critic Bill Wine will look back at an important film that is worth watching, either … 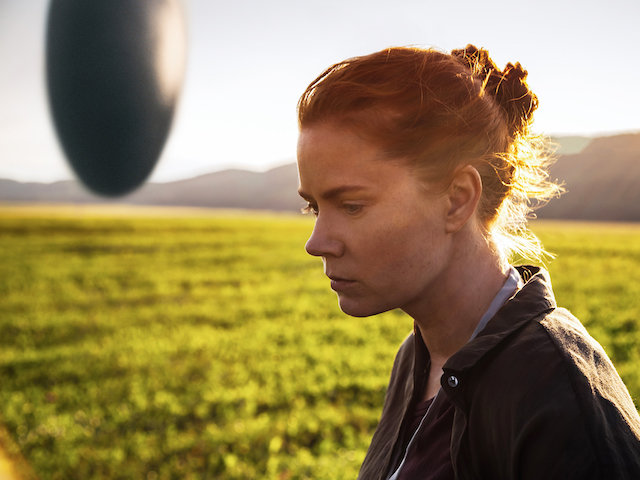 Amy Adams near one of the mysterious spaceships in “Arrival.”[/caption]

With the arrival of "Arrival" in 2016, the classic-science-fiction subgenre expanded by one amazing title.

It was a knockout: a smart, challenging, riveting, surprising and supremely satisfying drama that spoke to the head and the heart – in that order.

"Arrival" details a momentous space-creatures occurrence, our first actual contact with extraterrestrials as a dozen mysterious spacecraft land across the globe, necessitating the establishment of an elite team of experts to investigate just what the heck they are intending to do on Earth.

Why are they here? What do they want?

The big fears are: Are we on the verge of intergalactic warfare? Or might this result in a global war as the nations now playing the role of reluctant hosts would fail to find a way to cooperate among themselves? And just how many human lives – and whose – are in imminent danger

Amy Adams stars as Louise Banks, a world-class language and linguistics expert who, while mourning a child she has lost, is brought in by the government to help them figure out the intentions and translate the alien communications of the extraterrestrials who have just arrived on Earth.

Jeremy Renner plays Ian Donnelly, a theoretical physicist and mathematician. He has been brought on board by one Colonel Weber, played by Forest Whitaker, who is in charge of the frantic effort to find answers to their many questions.

Their mission is to enter the invading-or-visiting creatures’ egg-shaped craft and determine just why two huge heptapods have emerged from that craft, which is hovering over, among other locations, a field in Montana.

Accomplished Canadian director Denis Villeneuve("Sicario," "Prisoners,"Enemy," "Incendies") has concocted yet another somber, intense thriller that is visually and intellectually stunning, and filled it with arresting and sometimes mind-bending visuals.

And he somehow manages to make this admittedly demanding, cerebral movie, which is a slowburn procedural in its first half and remarkably suspenseful, spookily tense and startlingly, genuinely affecting in the third act, when it becomes deeply personal and moving.

Here’s a movie that doesn’t need souped-up action to thrill.

The script by Eric Heisserer, based on a 1998 short story by Ted Chiang entitled “Story of Your Life,” offers up a puzzle to be solved and poses big questions while exploring intricately heady themes such as, without giving anything away, time, grief, love, loss and the definition of humanity, most of which are less than apparent in the early going.

Yet the powerhouse, career-best lead performance by Amy Adams wasn't acknowledged at Oscar time despite her leading lady being assured and appealing, layered and complex, persuasively brilliant and naturally commanding and vulnerable but imposing.

She’s just one of the glorious elements that add up to a superbly crafted science-fiction offering aimed at a thinking and feeling audience.

Come to think of it, very few movies in any genre rival "Arrival."