Tom Hanks and Meryl Streep in “The Post."[/caption] by Bill Wine Each week, veteran film critic Bill Wine will look back at an important film that is worth watching, either for the first time or … 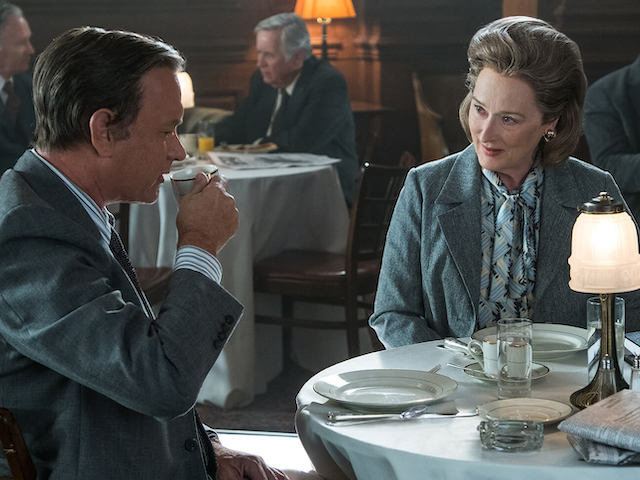 Tom Hanks and Meryl Streep in “The Post."[/caption]

It’s Spielberg, Streep and Hanks – with icons like these, first names are hardly necessary – together again for the first time.

And Steven, Meryl and Tom were not only making a 2017 movie, but making a statement about the Trump administration’s attack on the press of late and perhaps even making a little noise during awards season.

“The Post” – as in The Washington Post – is a historical biodrama and newspaper melodrama that finds master-class director Spielberg addressing the paper’s role in exposing the Pentagon Papers in 1971.

And it immediately takes its place among such restrained cinematic classics about journalism as “All the President’s Men” and “Spotlight,” yet another resonant reminder of the importance of freedom of the press.

The focus is on Post publisher Katharine Graham (the paper's first female publisher and second female newspaper publisher ever in America), played by Streep, and Hanks’ editor-in-chief Ben Bradlee, the two of whom decided to go ahead and publish the Papers after a federal judge had already short-circuited the similar efforts of the New York Times. These newspapers were challenging the federal government on the issue of their right to publish, given that they were exploring a cover-up that spanned four United States Presidents.

And period piece that it is, don’t think for a second that today’s political climate – and all the parallels that the very existence of this project suggests with respect to the adversarial relationship between the Trump administration and the press – is lost on screenwriters Josh Singer and Liz Hannah, or on the film’s three primary movers and shakers.

File it under “Movies That Matter.”

The script, which draws upon Graham’s Pulitzer Prize-winning 2016 memoir, “Personal History,” concentrates on the risky road traveled by Graham and Bradlee, sets itself up as a Watergate precursor, dramatizes the transformation of the titular newspaper from a regional publication to a national one and ends up representing itself as a virtual prequel to “All the President’s Men.”

So, yes, it’s a love letter to principled print journalism. And why shouldn’t it be?

For Spielberg (“Jaws,” “Close Encounters of the Third Kind,” “E.T . the Extraterrestrial,” “Schindler’s List,” “Jurassic Park,” “Lincoln,” “Saving Private Ryan”) it’s ho-hum, another keeper. But you can feel the film’s convictions in every frame, which is part of the reason it was nominated for the Best Picture Oscar and the Best Actress Oscar for Streep.

The Pentagon Papers comprised a secret study initiated by Secretary of Defense Robert McNamara, played by Bruce Greenwood, that chronicled the United States' involvement in Vietnamese politics since the 1950s. It made it obvious that a succession of political administrations from both parties – going all the way back to the Truman administration – lied about the progress being made in the conflict and the prospects for any kind of real American victory.

That was what Daniel Ellsberg (Matthew Rhys) initially leaked to the New York Times. As a contributor to the report who had been a State Department analyst and later a civilian military contractor for the RAND Corporation, Ellsberg had the access he needed to copy and leak the pages. The document clearly demonstrated that the war was not winnable, and yet the war effort continued. But the Nixon administration’s blocking of any further publication left it up to the Post, and Ellsberg agreed to leak the papers to assistant editor Ben Bagdikian (Bob Odenkirk).

Storyteller Spielberg is his usual deft overseer, conjuring considerable suspense, compelling and inspiring us even though we know the outcome in advance. But the emotional narrative spine is delivered by Streep’s Graham, who had unexpectedly taken over management of the paper after her husband committed suicide. It is she who finds her voice along the way in a thrust that resounds deafeningly in this particular year of the woman.

The courageous Graham-Bradlee decision to publish not only threatened the paper’s very existence, but could have meant a prison term for the two of them.

While Hanks provides an effective alternative reading of gritty crusader Bradlee, so memorably delivered by Oscar winner Jason Robards in “All the President’s Men,” Streep is her usual magnificently-nuanced-and-yet-underplaying self. She essays a character who comes into her own in a beautifully calibrated performance that suggests an alternative title: “Some of the President’s Men – and a Woman.”

As for maestro Spielberg, he pretty much ignores technical flourishes – certainly an appropriate approach – and lets the loaded subject matter speak for itself, which it does by delving into moral, ethical and legal nooks and crannies.

“The Post” is, among other things, a political rejoinder by a supremely talented triumvirate. And it’s as robust and splendid as it is timely.