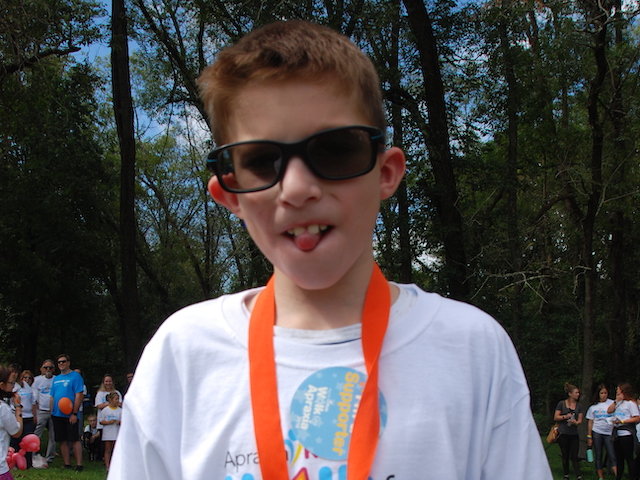 In some ways, Springfield High School student Maya Jennings’ 10-year-old brother, Greysen, is like any younger brother. He loves to watch videos on his iPad and is fascinated with fire trucks and all mechanical vehicles. Greysen wants to eat his favorite food for breakfast – Cinnamon Eggo Waffles with cream cheese. He loves to swim at the beach, play with this dog, Miller, and play tag with his friends at school.

His mother, Tiffany, said Greysen was “not dealt an easy hand.” He was born with microcephaly, epilepsy and an immune deficiency disorder, which he grew out of. Doctors initially thought Greysen had developmental speech delays, but later, around the age of 3, speech language pathologists diagnosed him with childhood apraxia of speech, a rare motor speech disorder that makes it difficult for children to speak.

Maya, of Flourtown, hopes to raise awareness and funds for research for CAS at this year’s Philadelphia Walk for Apraxia, which will be held at 11 a.m. Saturday, Sept. 21, at Fort Washington State Park.

She said children with the diagnosis of apraxia of speech generally have a good understanding of language and know what they want to say. However, they have difficulty learning or carrying out the complex sequenced movements that are necessary for intelligible speech.

“Their speech systems do not work that way,” she said. “These children need to be taught to get their brain communicating with their mouth. A straightforward case of CAS is due to the brain and mouth not communicating. There is no muscle weakness, no brain damage, so to speak. It’s just when the brain says, ‘say the word apple’ the message gets lost by the time the mouth is ready to speak. This results in inconsistent, inaccurate and usually unintelligible speech.”

Maya said the main thing she wants to convey to people is that she believes voice is different from speech. Speech is the neurological and physical production of sound, and it’s a method of communication. She added just because kids with apraxia can’t produce that speech, “it doesn’t mean they don’t have a distinct voice [or something they want to communicate].”

“It’s one of the reasons I am working hard to raise awareness because I know how frustrating it is for my brother to have apraxia,” she said. “He is a funny guy. He tells jokes. He is this amazing person. Everybody falls in love with him, but he needs the tools to communicate with others. When I first started coordinating the walk, I used the organization’s slogan which is “Be the Voice,” but I have edited that to ‘Amplify their Voices’ and act as their speakers because you are the substitute for their voice. You are just helping them unlock their speech, so they can share themselves with the world.” 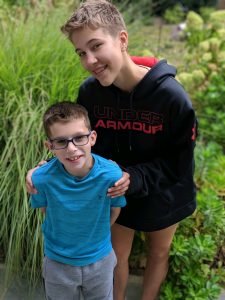 Maya Jennings with her brother Greysen, 10. She said he understands everything people say to him, but apraxia makes it difficult for him to verbally respond. (Photo courtesy of Maya Jennings)

Maya added that one of her brother’s greatest gifts is his empathy. She said if she is sick or upset, he will run and get the first aid kit. He will look at her with his blue eyes and insist she put a Band-Aid on.

“No matter what it is,” she said. “His answer is Band-Aids. He forces me to put Band-Aids on. He is an awesome healer in every sense of the word. He is the best hugger!”

“He doesn’t get frustrated by his inability to speak,” she said. “He just keeps at it until you figure it out. Greysen knows exactly what he wants, but he might have to say the same syllable a thousand times before he gets it correctly. To put everything together into words is really complicated.”

“It would be easy to sell someone with his diagnosis short,” he said. “I guess in his own way he is constantly reminding us he can communicate.”

Drew said his son has an infectious laugh and absolutely loves playing tag.

“You don’t have to communicate verbally to play tag,” he said. “So, it’s a game he can enjoy and play with his friends.”

“I remember the first time we got an app on a phone for Greysen,” he said. “Tiffany did it. It was just a yes button and a no button. And it was emotional because it was the first time we could learn things about him, because Greysen was able to say yes or no. At the time, he couldn’t even shake his head yes or no. It was amazing to be able to ask him questions. It was great! And it was a great feeling for him to be able to communicate in that way.

“I think one of the things I think about as a parent as Greysen gets older is that kids become less accepting of difference,” he said. “Every day that he gets older – and because his vocabulary is not moving forward – he gets further and further from an age where people aren’t expecting him to talk. So, that’s one of the things I am concerned about for him.”

Tiffany added that the Apraxia Walk is “truly special” because her son gets to be around “other kids like him, and he knows it. He feels that. Getting a medal and having people show up to tell him they are proud of what he has been through and how far he has come means everything to him.”

Updated: This article incorrectly stated that Greysen had an auto immune disorder.