Cover of Dave Van Ronk’s memoir.[/caption] by Hugh Gilmore In honor of the Philadelphia Folksong Society’s 58th Folk Music Festival (this past weekend), I’d like to recommend two essential … 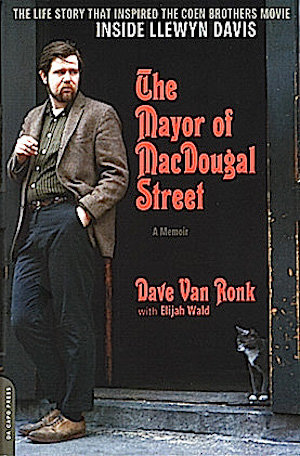 In honor of the Philadelphia Folksong Society’s 58th Folk Music Festival (this past weekend), I’d like to recommend two essential books fans of folk music might enjoy.

Back in the early '60s I stepped out of conservative La Salle College, and the clean-cut Kingston Trio, to begin a master’s program at Temple University. Being attracted to fringe people, I slipped right into the “folkies” crowd on campus. Day after day I sat in the Mitten Hall cafeteria listening to long-haired, bearded, denim-shirted and work-booted people singing folk music.

At night and on weekends, the scene shifted downtown to the coffeehouses that had sprung up. For music, especially on Sundays, there was the incomparable Gilded Cage at 21st and Rittenhouse streets – closed in 1969, but still remembered as a shrine for Philadelphia live folk music.

Many of the veterans of those days started the Philadelphia Folk Festival, including WXPN’s Gene Shay, the late George Britton and the late Temple U folklorist, Ken Goldstein. The Philadelphia Folksong Society is still very much alive and thriving at 6156 Ridge Avenue in nearby Roxborough.

Exciting memories of those folkie days came back to me last year when I read John Lomax’s memoir, “Adventures of Ballad Hunter” (1947), a genuinely wonderful book. Growing up on a Texas farm, the young Lomax listened to genuine cowboys singing their lonely tunes at night. Still just a boy, he wrote down the lyrics of the songs he heard (which, when he finally managed to get to college, a professor told him to burn as worthless trash).

After many rough times, through a combination of preparedness and luck, he eventually was commissioned by the Library of Congress to record on wax cylinders whatever American folk music he could find. His memoir describes his travels around the country, mostly the deep south and far west, rescuing folk ballads and blues tunes by recording them for what became The Archive of American Folk Song. After reading “Adventures of a Ballad Hunter,” I was thrilled to visit the Library of Congress website and see photographs and hear sound clips of the singers he’d met and recorded.

It amazed me to realize that many of the songs the folksters at Temple were singing back then were virtually fresh out of rural Arkansas and Texas. They didn’t become part of anyone else’s repertoire until the Library of Congress, and Folkways Records and a few other publishers made them available.

The second book I’d like to recommend is one I happened on after reading a New Yorker piece by Louis Menand (“Bob On Bob,” Sept. 4, 2006) about a newly published book of Bob Dylan interviews. In it, Menand called Dave Van Ronk “a kingpin of the Village folk scene.” Van Ronk started in jazz, switched to bluesy folk, and was very well known during his time, though he’s an unfamiliar name today. Menand said Van Ronk had written a posthumously published memoir, “The Mayor of MacDougal Street,” with Elijah Wald, that was “a wise and very funny book; in some ways a great book.”

I’ll verify that. In “The Mayor of MacDougal Street,” Van Ronk writes about every aspect of the movement – work songs, the Wobblies, hipsters, the recording industry, the growth of the folk movement, Joanie Mitchell, Bob Dylan (whom they all called Bobbie), the rediscovery of great old blues singers washing dishes in low dives. All written with verve and patience, without bitterness and with a musician’s technical insights into what made different songs and performers musically unique.

Hugh Gilmore is a former anthropologist who lives and writes in Chestnut Hill.