Liz Kinder, 50, a Mt. Airy resident for six years, opened her pottery studio at 7111 Emlen St. in West Mt. Airy just as the pandemic hit in March. “I had a new kiln to explore,” she told … 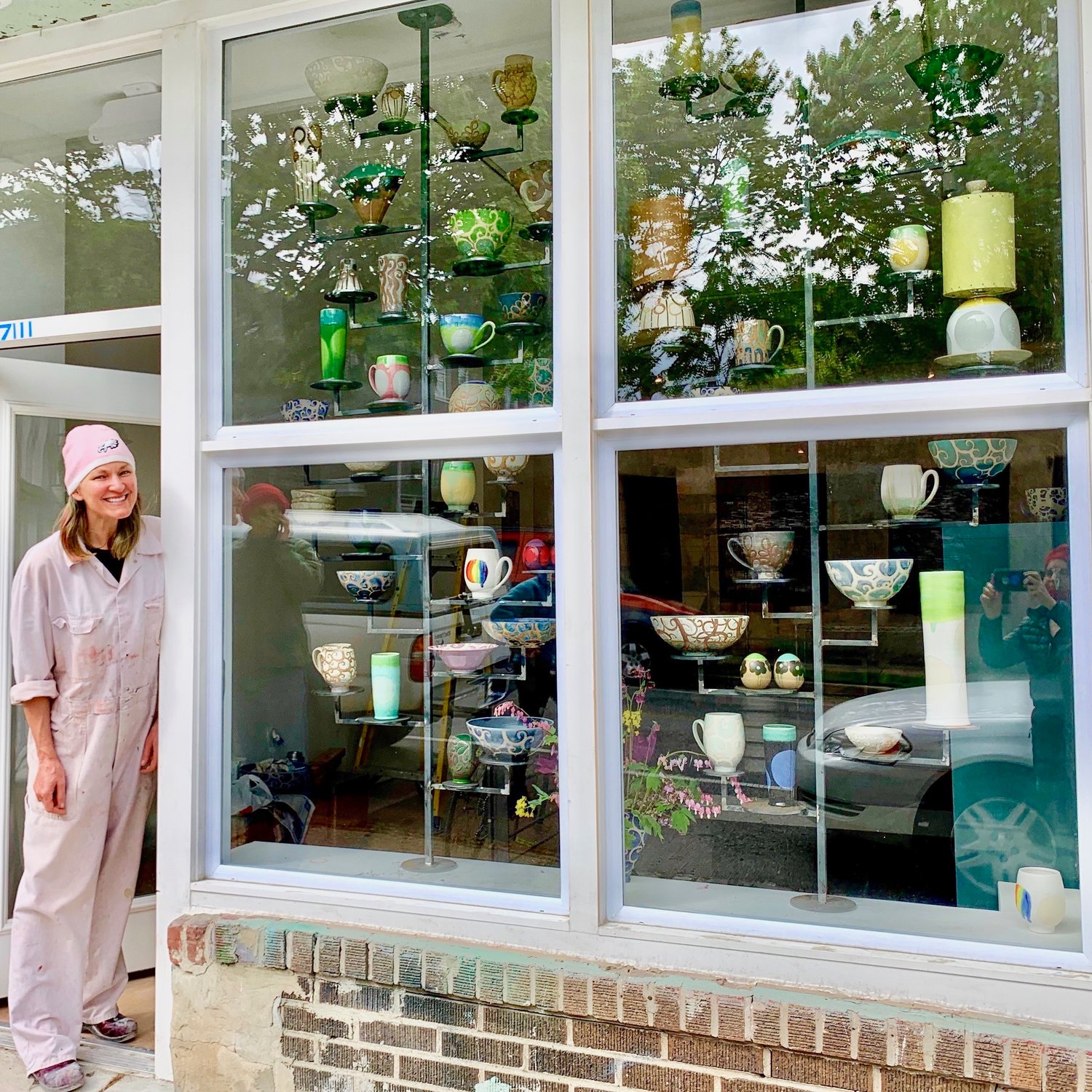 Liz Kinder, 50, a Mt. Airy resident for six years, opened her pottery studio at 7111 Emlen St. in West Mt. Airy just as the pandemic hit in March. “I had a new kiln to explore,” she told us recently, “and I had a place to go and be creative and alone during quarantine. I expected business to be spotty, but I’d never taken time off before, so there was a huge demand for my work. I’ve always maintained that my coffee cups make coffee taste better.

“I guess my plates can make quarantine home cooking taste better. So many people have been ordering new sets of dishes. I’m actually feeling guilty that my quality of life is fine right now. So many people have lost so much and are terrified for the future. I’m missing hugging people, and I’m hoping that we finally get our priorities straight as a nation, but I’m rather sheepishly doing well.”

A native of Manchester-by-the-Sea, Massachusetts (a 2016 film by that name won six Oscar nominations and two Oscars), Kinder previously had a kiln on Norris Street in Kensington and then moved to Northern Liberties. “It was rough,” she said. “The cops used to film drug deals from our roof like on the TV show, 'The Wire.' Tim (her husband) got arrested and spent a night in jail when my baby, Jack Peter, was only a month old for attacking a pimp with nunchucks.”

Liz, who pronounces her last name Kinder (as is kindergarten), although she is kinder (k-eye-nder) than most people, began making pottery in high school and went on to earn a degree in Fine Arts at Amherst College and then move to San Francisco “to avoid getting a real job.” She proceeded to go on a bicycle trip for five months from Guadalajara, Mexico, to San Jose, Costa Rica, with her Irish boyfriend and had an epiphany about making ceramics her life's work.

After returning to the U.S., she sold her bicycle to a prominent chef, Joseph Manzare, who was so impressed with her ceramics that he ordered bowls, platters and more for his then-new restaurant, Globe, in San Francisco. The exposure of her ceramics at Globe led to so many orders that “business was really booming” from 1996 to 1998. Liz was then accepted to a master's degree program at the Royal College of Art in London. She partied so hard at a going-away party, however, that “I broke my arm falling off the bar. I was on the bar with my stylist friend, Danny, dancing to Gary Glitter. I had platform shoes on, and I ducked to get under the ceiling fan and lost my balance. The last thing I remember seeing was the terrified face of the bartender as I was careening down on his side of the bar. I left a dent in the fridge with my elbow, which I shoved into a pint glass of ice water for the rest of the night.”

Liz moved to Philadelphia in 2004 because “my brother was having a baby girl; my dad was turning 70, and I was never going to be able to buy real estate in San Francisco, no matter how many cups and bowls I sold! Every year I did the big Rosen show at the Convention Center in Philly, and I’d stay with friends who are in academia. The first year I stayed with them, it was in a cute apartment in the 'Gayborhood.' The next time it was in a massive loft on 13th just north of Vine. Then they bought a house in South Philly. I wanted to buy something also, so I contacted Tim McDonald, a friend of a friend, and he hooked me up with a building to buy and convert into a live/work space, and then I married him.”

When Liz was in her 20s, a legal secretary sold her a potter’s wheel she had in her garage for $200. Right before she was going to give it away, her car was totaled while parked, and she was able to afford two kilns with the insurance money. “I had three  kids during the recession,” she said, “which was a perfect time to be working at three-fourths of my usual pace. The Zahav Cookbook gave me a boost when things seemed to be a little slow. I guess all of that is to say it just seems to chug along somehow.”

(The “Zahav Cookbook” Liz referred to was written by Michael Solomonov, owner of Zahav, one of Philly's most celebrated restaurants, where all reservations — before the pandemic — had to be made at least two months in advance. Solomonov, a James Beard Award winner in 2011 as the “Best Chef, Mid-Atlantic States,” and in 2017 as “Best Chef, U.S.,” wrote in his “Zahav Cookbook” that “We were lucky enough to discover Liz Kinder, a world-class Philadelphia potter, who invited us into her studio and let us borrow for photography every plate, platter and bowl our fingers touched.”

When asked what was the best advice she ever received, Liz said, “From my dad, 'Floss.' Also, 'If you’re interviewing with a man, wear your hair down; with a woman, wear it up.' And from Sharon, my roommate in San Francisco for seven years, 'Don’t expect anything back for being kind.'”

For more information, visit lizkinder.com. Len Lear can be reached at lenlear@chestnuthilllocal.com