For the girls on the Springside Chestnut Hill Academy soccer team, there was one more box to check. 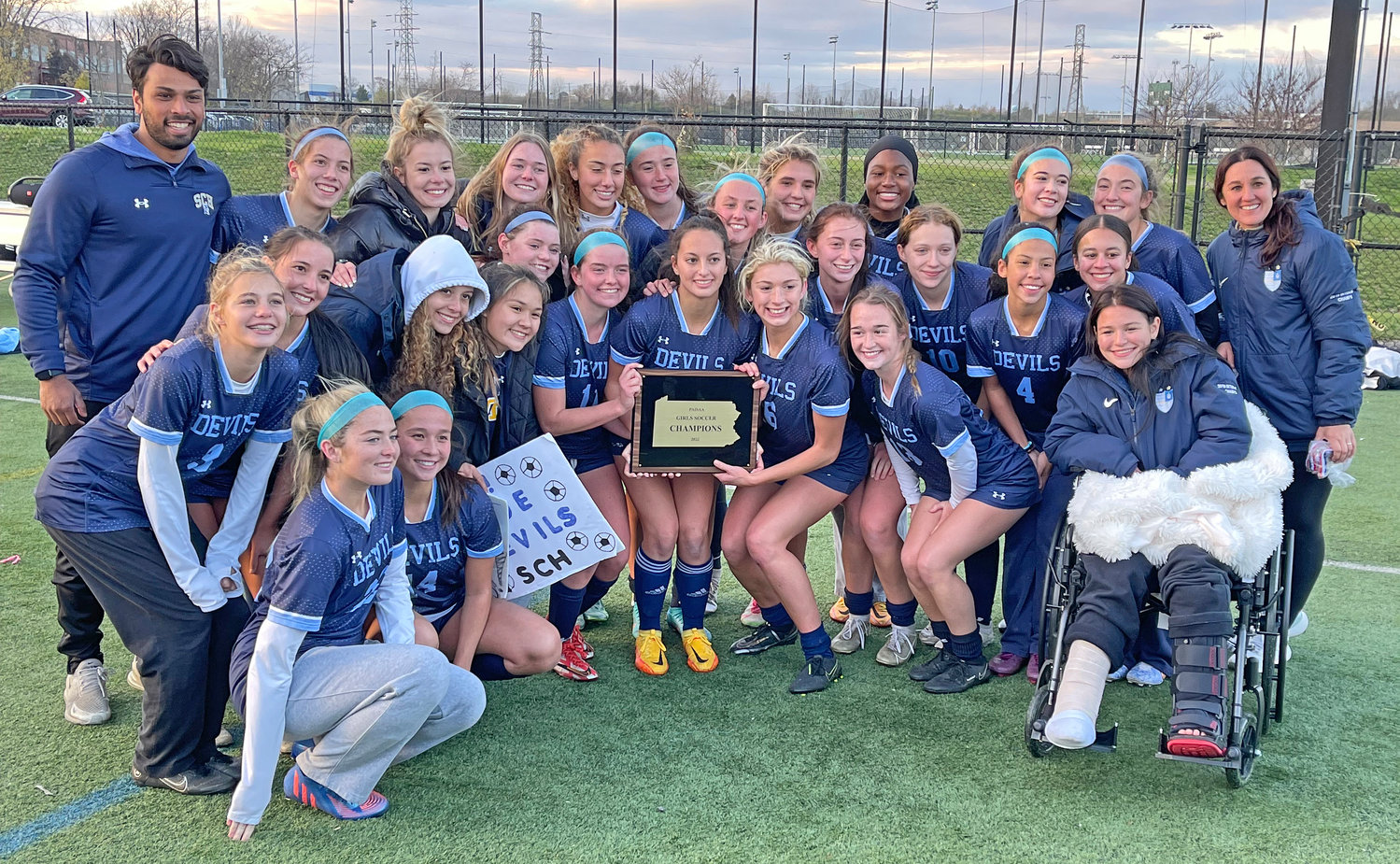 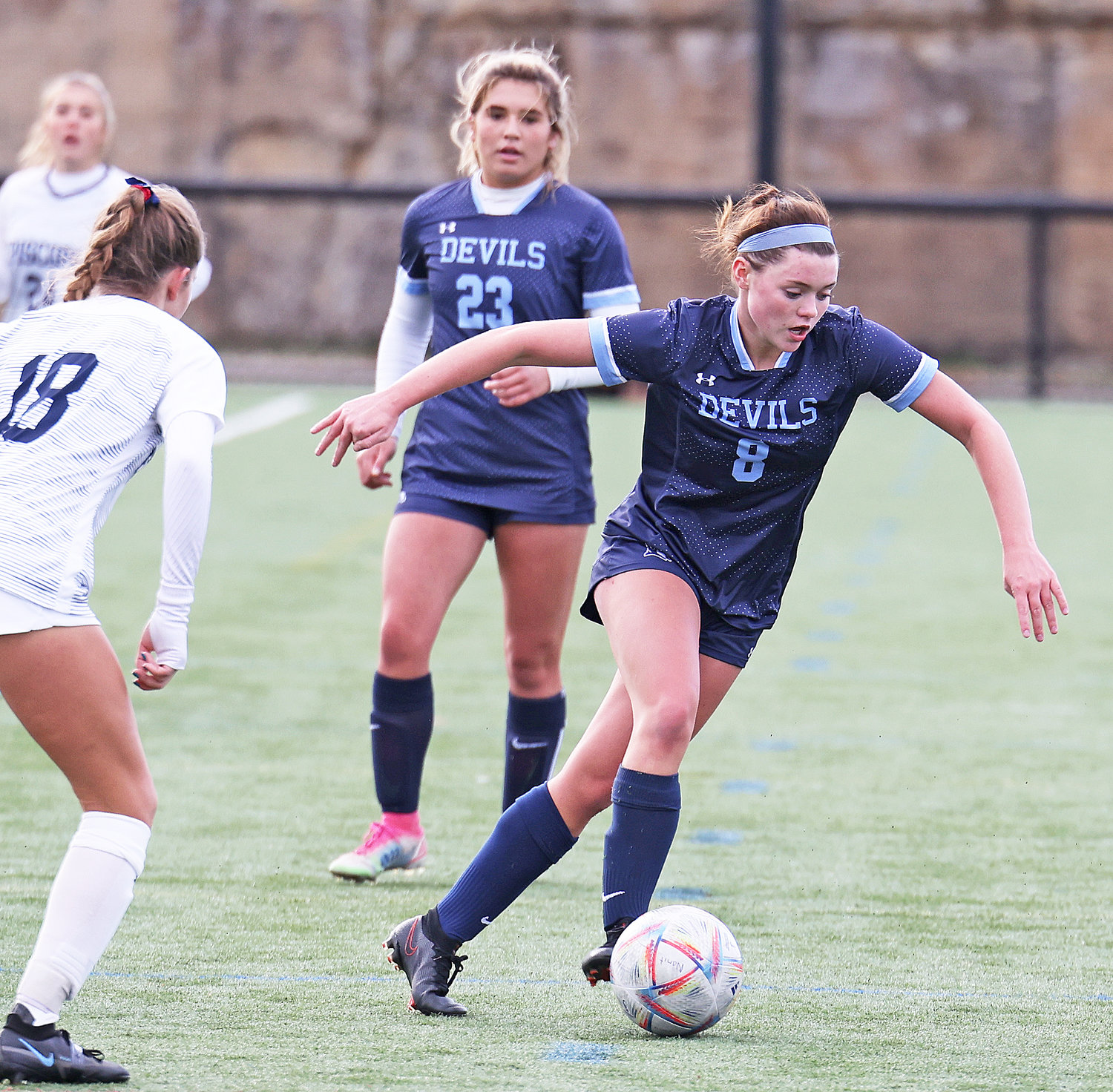 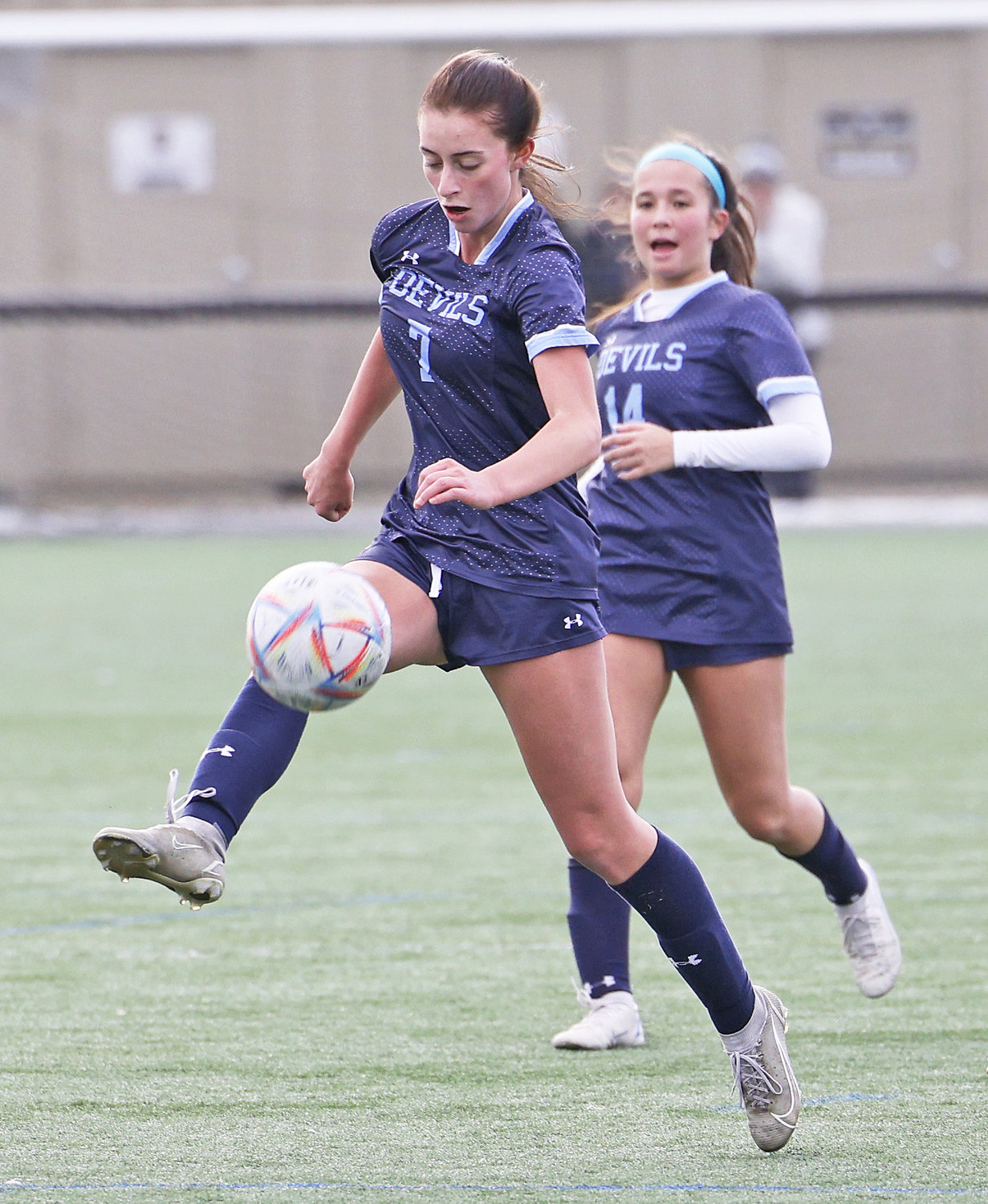 Abby Fitzmaurice, a senior stalwart on the Blue Devils' back row, halts an Episcopal advance.
Photo by Tom Utescher 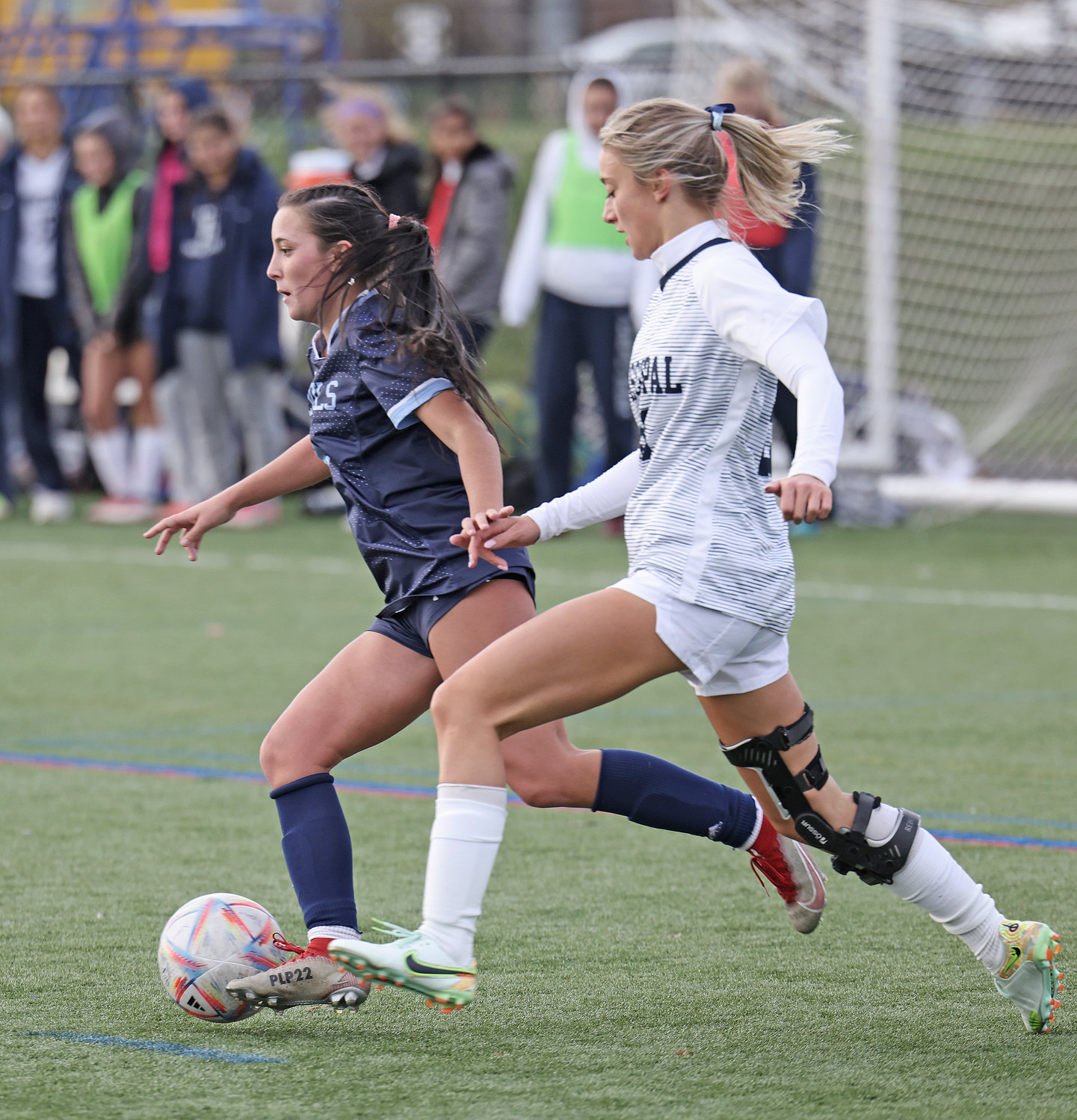 With SCH fans as a backdrop, Blue Devils senior Lisa McIntyre (left) maneuvers against Caitlin McCarthy of the Churchwomen.
Photo by Tom Utescher 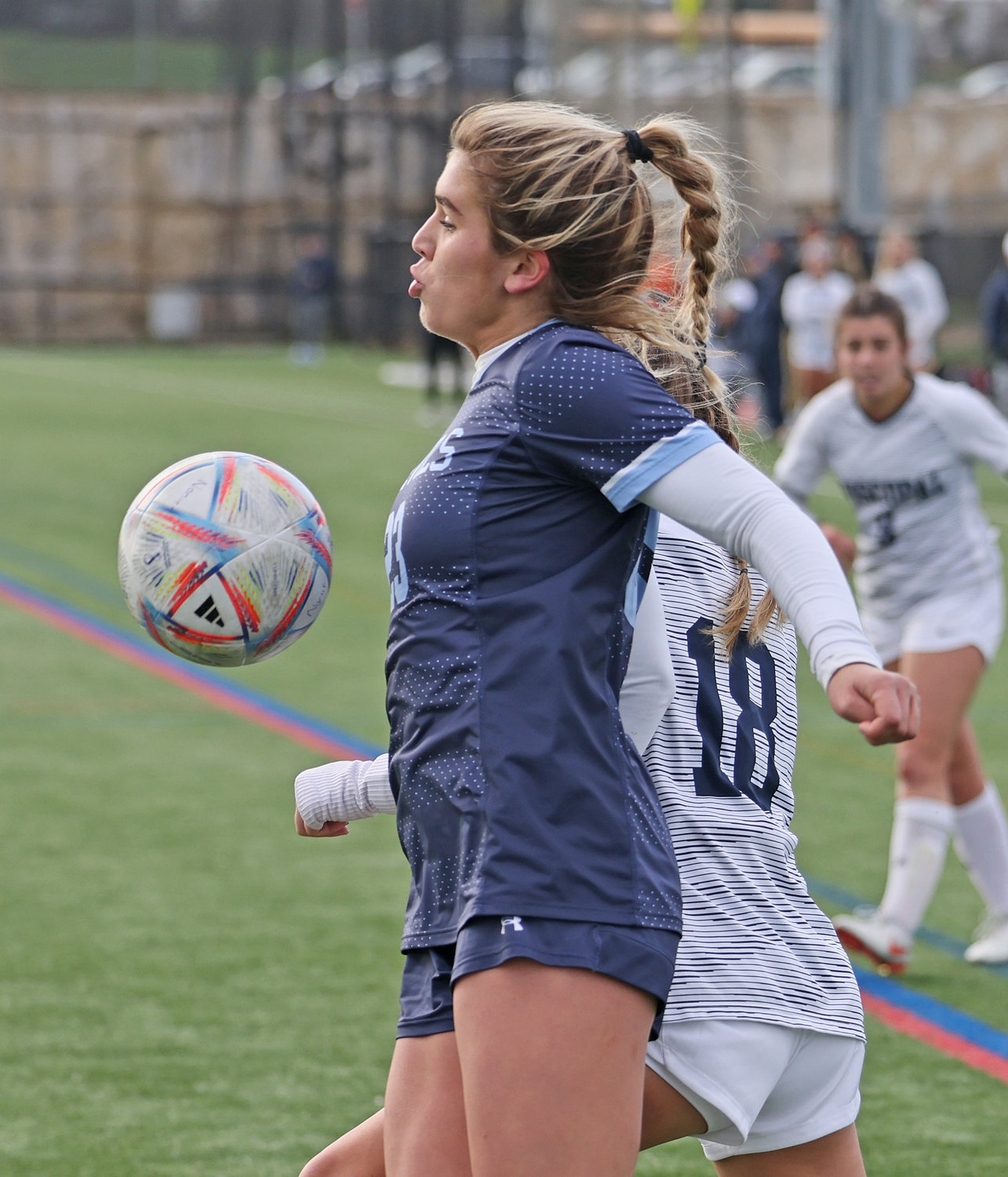 Blue Devils junior Alex Reilly steps in front of an Episcopal player to control the ball.
Photo by Tom Utescher 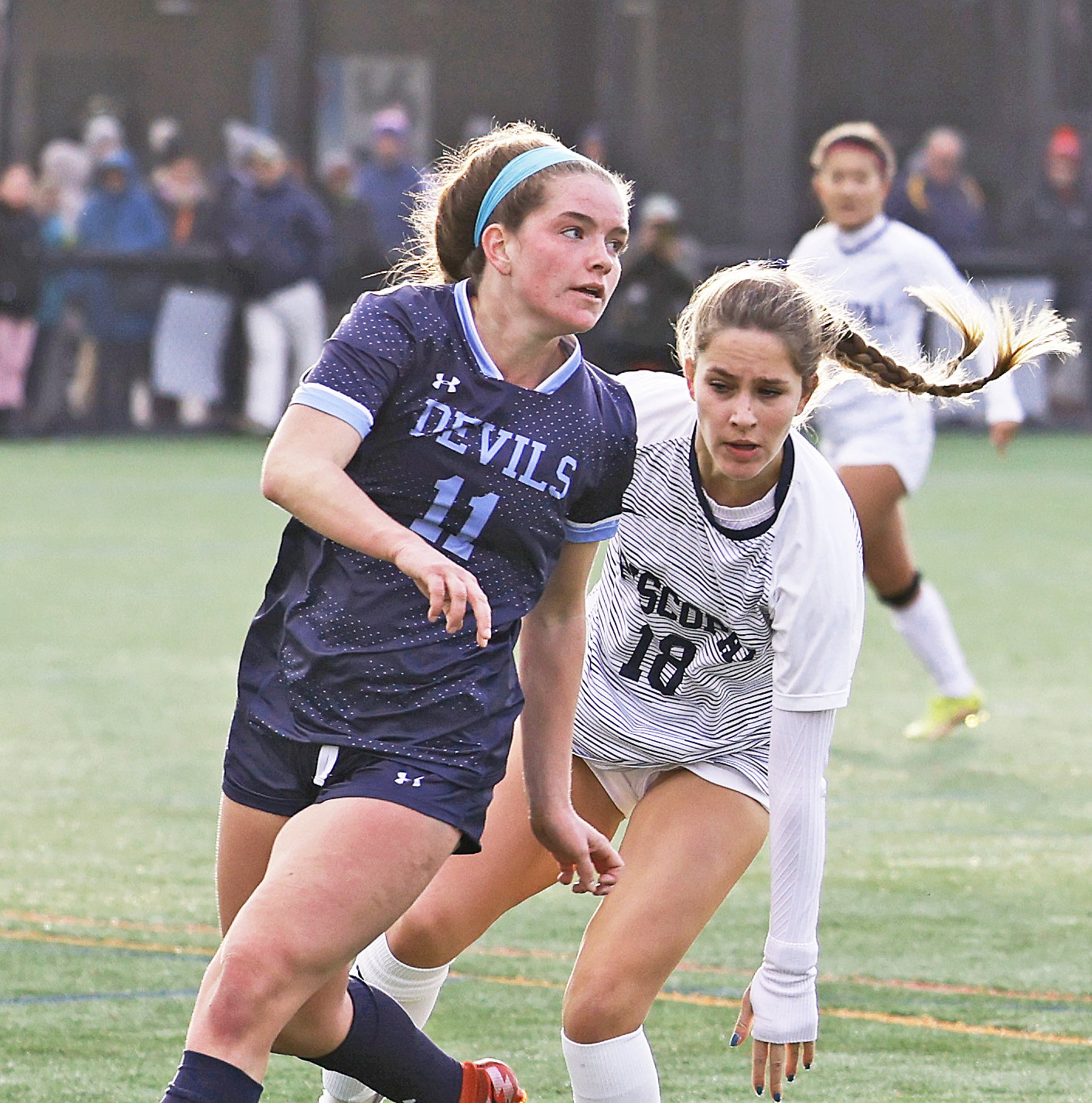 SCH senior Julia Thomson pivots to pursue a ball near the sideline.
Photo by Tom Utescher 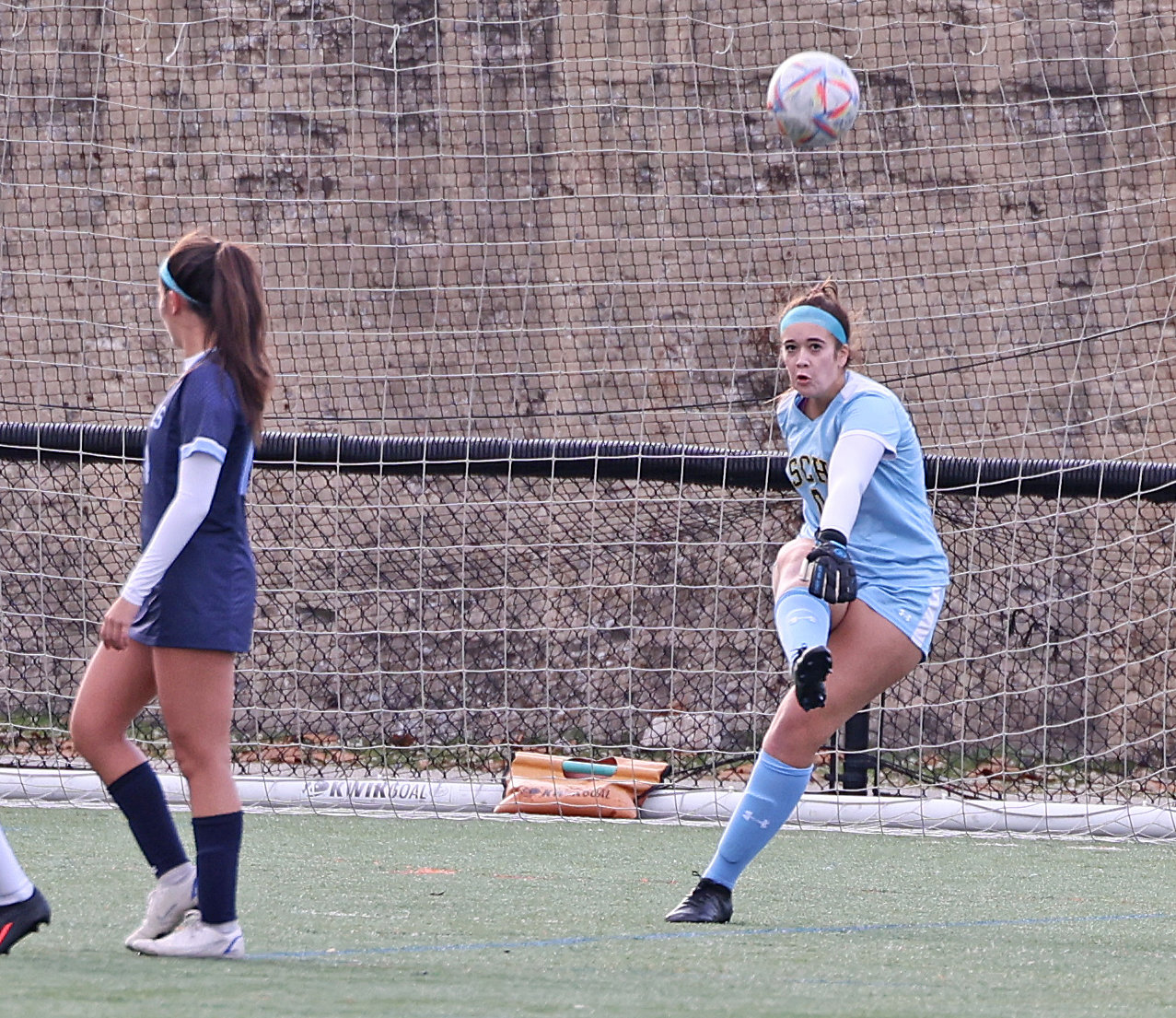 Senior goalie Ellie Stratz sends a punt up the field during one of the best games she played as a Blue Devil.
Photo by Tom Utescher
Previous Next
Posted Wednesday, November 23, 2022 12:00 am
by Tom Utescher

For the girls on the Springside Chestnut Hill Academy soccer team, there was one more box to check. On Nov. 3, they had clinched their third straight Inter-Ac League championship. Now they were aiming to end their season by repeating as the Pennsylvania Independent Schools champion.

Facing an Episcopal Academy side that had been their toughest opponent during the league campaign, the Blue Devils saw a 0-0 count remain on the scoreboard well into the second half in last Wednesday's final at the Proving Grounds in Conshohocken.

With just under 11 minutes to go, senior Abby Kenkelen scored for SCH and the top-seeded Devils ground out a 1-0 victory over the EA Churchwomen, the second seed for the tournament. In a bravura performance in goal, SCH senior keeper Ellie Stratz recorded eight saves for her shutout.

A year earlier on the same field, Springside Chestnut Hill had won the title by the same score over the Academy of Notre Dame.

This fall, the two official Inter-Ac meetings between SCH and Episcopal resulted in a 1-0 overtime victory for SCH and then a 1-1 overtime tie. In the PAIS tournament bracket, the Blue Devils beat number eight Baldwin in the quarterfinals, 4-0, then defeated fifth-seeded Westtown School in the semifinal round, 1-0. EA advanced with a 4-0 victory over seventh-seeded Germantown Academy and a 4-1 win against sixth-ranked Penn Charter.

For last week's final in Conshohocken, the teams would play under partly sunny skies with breezy conditions and temperatures dipping from the low 50s into the high 40s during the contest.

The Blue Devils' first shot of the afternoon, by junior Brynn Donohue about three minutes in, was easily handled by EA goalie Maya Naimoli, a senior who'll play at Ohio State.

Although an SCH corner just after that failed to produce a shot, the Blue Devils kept possession and appeared to be outhustling the Churchwomen early in the contest. A call of "Everything's too slow right now!" was heard from the Episcopal sideline.

With seven minutes elapsed, the Blue Devils had a corner kick from the right that led to a shot over the goal by senior Lisa McIntyre. Episcopal then put together a stretch of offense. Sophomore Kate Dente brought the ball down the left wing, and SCH's Stratz advanced far out of the cage to block a shot a few feet off of Dente's foot.

On the right wing another EA 10th-grader, Maya Bright, used her speed to unbalance the SCH back line. Stratz doesn't see many serious challenges during the typical SCH contest, but it was different this time.

The senior played a great game, not only with her stops in front of the goal, but also in timing her charges out onto the field to grab or kick away the ball on threatening Episcopal assaults.

Most of the season, Stratz started and then turned over the cage to sophomore Gracyn Lee-Torchiana for the second half, but she played the full game in the PAIS semifinals and finals.

Roughly 15 minutes into the match SCH got the ball to Alex Reilly in the middle of the EA box, but Episcopal backs blocked two shots by the junior. Just past the midpoint of the first half, Springside was awarded a long direct kick on the right, and senior Bella Brown's serve was plucked out of the air by EA's Naimoli.

Although Episcopal defenders kept close track of the whereabouts of the Blue Devils' McIntyre, she used her speed to make her presence felt not just on offense, but in the midfield and on defense.

After Brown's direct kick and Naimoli's catch, the keeper's punt got the Churchwomen moving quickly upfield, and Springside Chestnut Hill defenders had to dish the ball back to Stratz.

Just before and after the 12-minute mark (remaining) McIntyre shot the ball over the EA cage from the right, and on an Episcopal corner the ball traveled in the air to Stratz.

After an SCH corner with under eight minutes left, the Churchwomen started to clear the ball out up the left side, but before it reached midfield senior Brigid McDonald stepped up to send the ball back into the offensive third. It got to Brown down the right sideline, and she dodged a defender and passed it into the near side of the box for Kenkelen.

Kenkelen turned on the ball and got off a hard shot angled toward the middle of the net, but Naimoli came up with her best save of the day with seven minutes to go in the first half. Subsequent shots by McIntyre (off-balance) and senior Lanie Franklin proved less challenging, and on one last rush with 20 seconds left McIntyre found herself outnumbered just outside the 18. It was still 0-0 at the intermission.

On the spectators' side of the field, Springside Chestnut Hill fans far outnumbered Episcopal supporters. EA's field hockey team was playing in a PAIS final on another field in the Proving Grounds complex, and the sticksters drew the majority of fans from the Main Line school.

In the second half the Blue Devils had to attack into the wind, but they still made offensive moves in the early minutes. With six minutes gone, Brown's corner kick from the right almost found the head of fellow senior Mary Trudeau in the middle of the box, but there was no shot.

A little later, SCH played a short corner from the left, and on a pass inside EA's Naimoli wound up with the ball. She initiated an attack up the field by the Churchwomen. When EA threatened to beat SCH backs to the ball on a charge along the right sideline, Stratz rambled way out of the box up near the sideline. Her judgement proved sound; she reached the ball first and knocked it out of bounds to end the immediate threat.

In a Blue Devil sortie to the Episcopal 18 a pass inside by Brown got a little too far ahead of McIntyre.

At the other end, Stratz made several saves in front of the goal, and in the middle of the half Episcopal hit the Springside crossbar on the last of three consecutive corner kicks. A little later on, McIntyre fired a ball that struck the left goalpost of the Churchwomen.

Even if there had been a hefty admission charge to the event (there was none) fans would've been getting their money's worth, with full-field footraces and pulse-raising activity inside the 18-yard line at both ends. As the second half wore on, it became like watching a pair of fit and aggressive combatants in an old 15-round prize fight, each swinging away in hopes of landing that one decisive punch. Finally, one connected.

As the clock dropped down to 11 minutes remaining, McInytre had the ball down near the left endline, with a group of Churchwomen swirling around her. She brought the ball out along the left boundary of the box to the top corner and slipped a pass inside to Reilly.

Reilly, in turn, prodded the ball a few yards past an EA defender to Kenkelen, who was almost even with the left post when she angled a shot on the ground into the right side of the Episcopal cage. The lone goal of the afternoon was on the board with 10:57 remaining as the SCH crowd exploded in cheers.

As the clock cut into the final 10 minutes, Brown put a little too much air under a shot at one end, and then a long direct kick by the Churchwomen tracked wide of the upper left corner of the Blue Devils' cage. Back down the pitch, SCH's Kenkelen saw a promising header lift above the crossbar.

After a brief stretch of offensive activity for Episcopal around the four-minute mark, one could sense Springside's confidence swell as the last few minutes ticked away. Before long, the crowd cascaded onto the field, enveloping the 2022 PAIS champions.