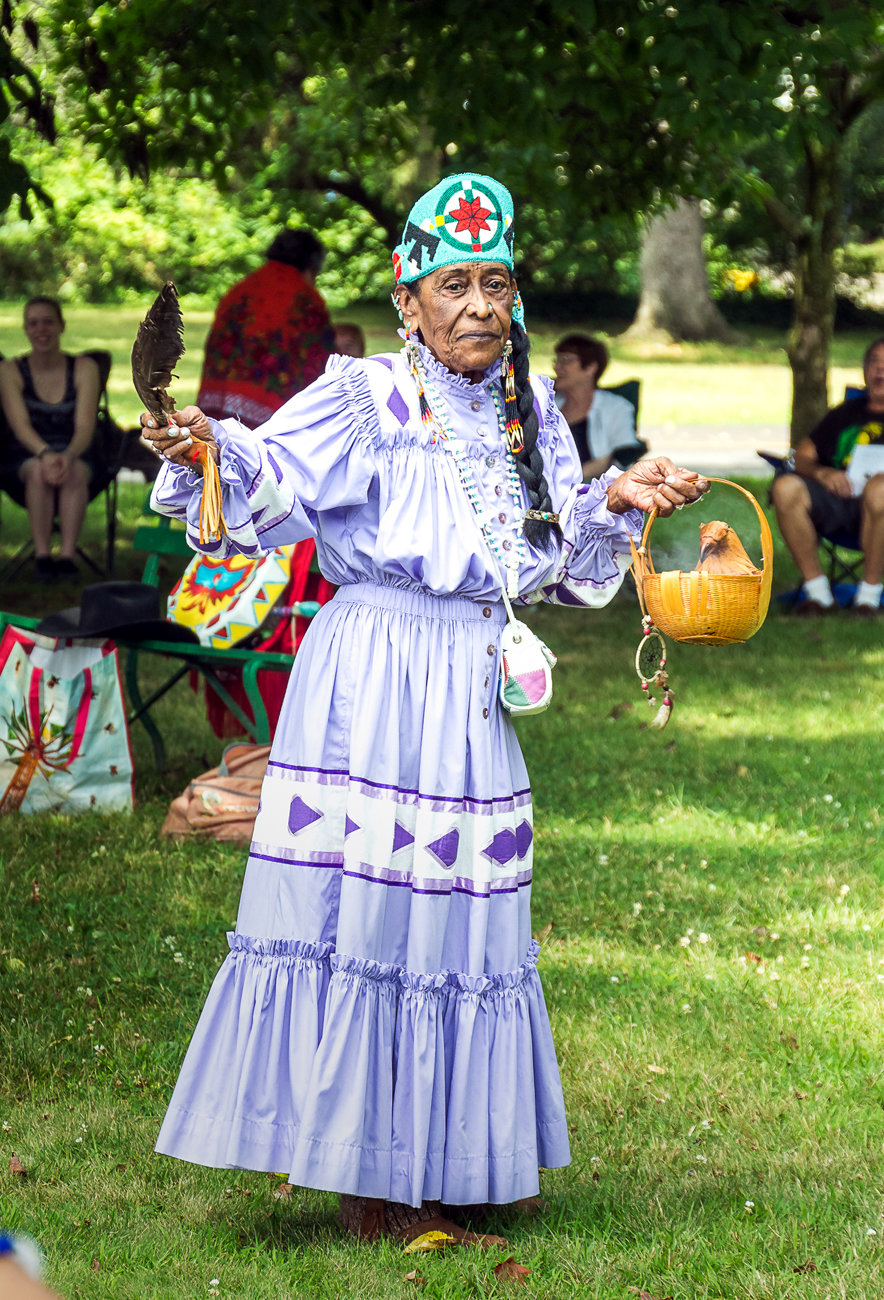 A Mt. Airy resident for 52 years, Chief Buffy Red Feather Brown, dressed in her Native regalia, often spoke at local schools, universities and other public and private assemblies about the history, culture and historical significance of Native Americans.
Cheri Wenger 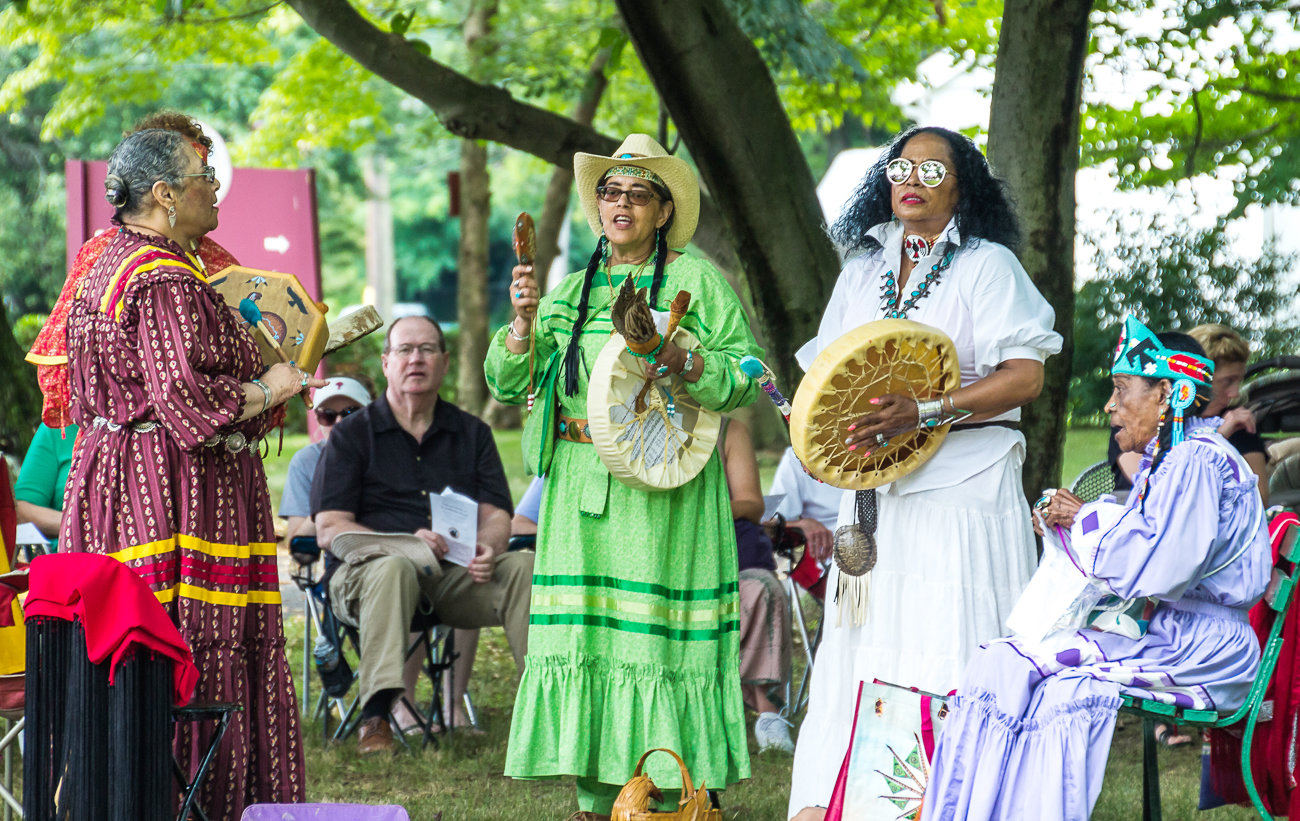 Guests and the Sisters of the Blessed Sacrament gathered July 15, 2017, at the National Shrine of Saint Katharine Drexel in Bensalem to celebrate Saint Kateri Tekakwitha and Native American cultures. Chief Buffy is on the far right.
Cheri Wenger
Previous Next
Posted Wednesday, November 10, 2021 6:00 am
by Len Lear

Chief Buffy Red Feather Brown, a Mt. Airy resident for 52 years and passionate Native American activist who often spoke in local schools, universities and other public and private assemblies about the history, culture and historical significance of her ancestors, died at age 93 on Oct. 23 at the Visiting Nurse Association Hospice in East Falls.

A lifelong Philadelphia resident, Brown was a key figure in the 1988 founding of the Southeastern Cherokee Confederacy of Pennsylvania (SECCP), an organization dedicated to preserving Native American traditions. She later became the leader of the group. In 1994 Brown also created the annual three-day Native American Festival at Temple University's Ambler campus, usually held in May. Brown told me many years ago that she created the festival to raise money for SECCP's scholarship fund for Native American children and to spread local awareness about the Cherokee people. At the festival, members of Brown's tribe dressed in homemade full Native American regalia.

"In the 21st century, you have to be educated," Brown said. "That doesn't mean you lose grasp of who you are, but to be able to survive in this world, you have to have an education. One of the recipients of our scholarship fund, Lauren Sullivan, used it to become a medical doctor.”

Angela Rapalyea, a lifelong Chestnut Hill resident and Springside School alumna who died in 2017 of leukemia, was also a passionate advocate of Native American culture who attended Chief Brown's festival in Ambler every year. “Chief Brown may be small (just five feet tall),” she once told me, “but she is a giant of a human being. When she speaks, everyone listens because she is so captivating, but she is a kind, gentle soul as well.”

In an interview in November, 2018, with CatholicPhilly.com, Chief Brown said that Thanksgiving should be a daily attitude rather than an annual observance. “A true appreciation for God’s many gifts makes every day a day of Thanksgiving.” she said. “I thank God when I wake up that I can see, that I can walk. I look at the bottom of my foot for an expiration date, and when I don’t see one, I thank God I’ve got another day.”

A devout Catholic who fully embraced both her religion and Cherokee heritage, Brown said that many Native Americans do not observe Thanksgiving because a single (and often highly commercialized) commemoration is regarded as a “false celebration.”

In addition, she said the holiday’s origins recall the tragic history of relations between Native Americans and immigrant settlers. “Contrary to European explorers’ perceptions, we weren’t ‘discovered,’” she said. “We were already here for centuries and mostly living at peace.”
Brown graduated from West Philadelphia High School, studied classical guitar at Temple University and business administration at La Salle University. She worked for years as an administrative assistant in the Philadelphia School District. Her last job was at the former Leeds Middle School in Mt. Airy (closed in 2014) in the 1990s.

Brown told me her Native American roots could be traced back to the 1500s and that her ancestors were almost decimated during the “Trail of Tears,” the federal government’s forced relocation during the 1830s of Cherokee and other native tribes from the southeastern U.S. to Oklahoma. An estimated 100,000 indigenous residents were driven from their homes at gunpoint, with approximately 25,000 dying en route of disease, starvation and exposure to frigid weather.

Today, Brown's organization boasts several hundred members. She told me that some members would drive as far as two hours each way to attend meetings. At meetings they share stories, weave baskets, do bead work and discuss their history.

Brown's husband of 57 years, Hamilton, died in 2005. She is survived by a son, Hamilton Jr.; a daughter, Theresa, several relatives and countless friends and admirers.

For more information, visit secherokee-confederacypa.org Len Lear can be reached at lenlear@chestnuthilllocal.com