Last Friday and Saturday Mount St. Joseph Academy upheld a long tradition of success at major crew events as the Magic competed in the 95th annual Stotesbury Cup Regatta on the Schuylkill. 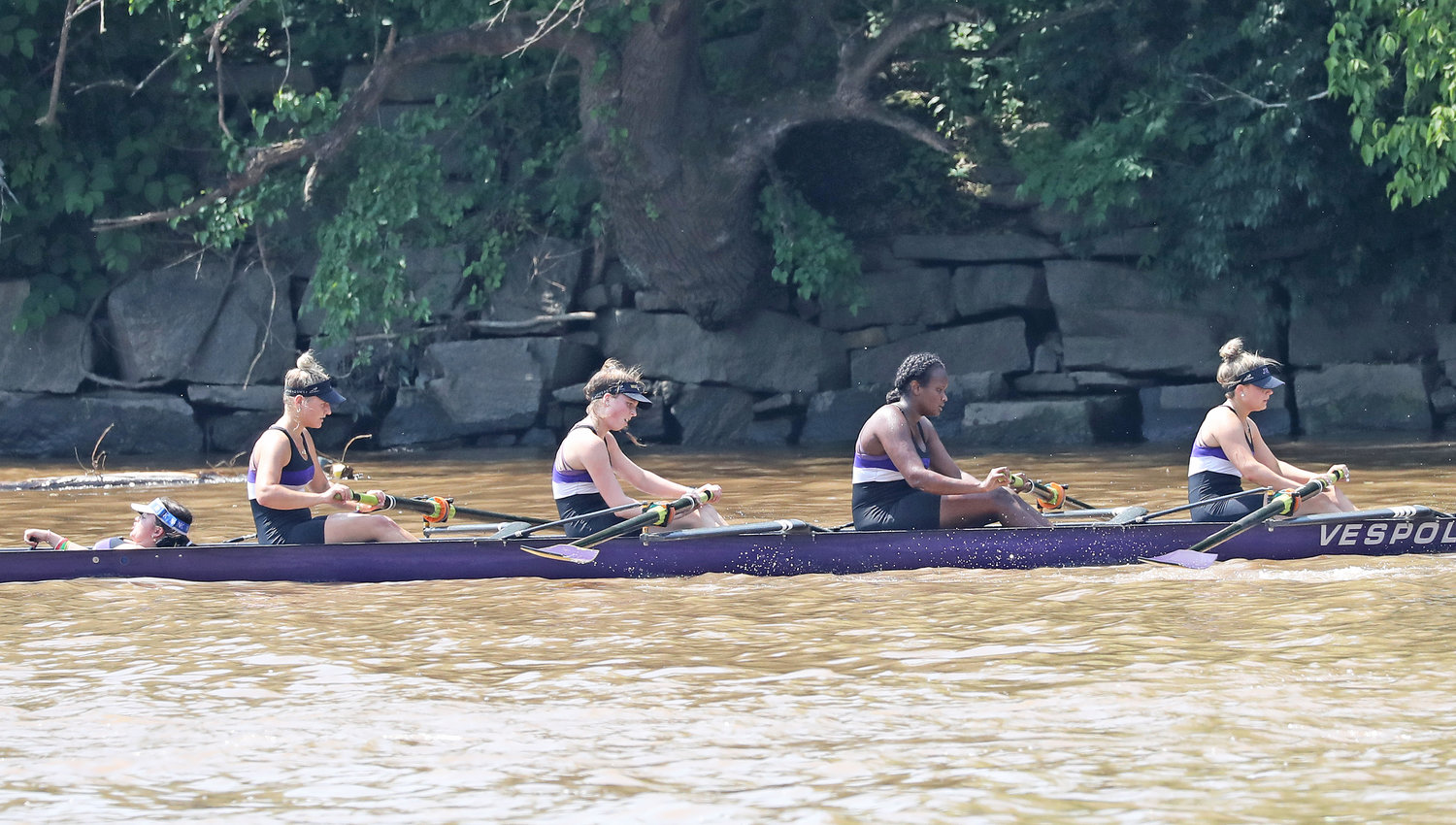 Mount St. Joseph's senior four rows alongside Peter's Island near the lower end of the course.  Photo by Tom Utescher 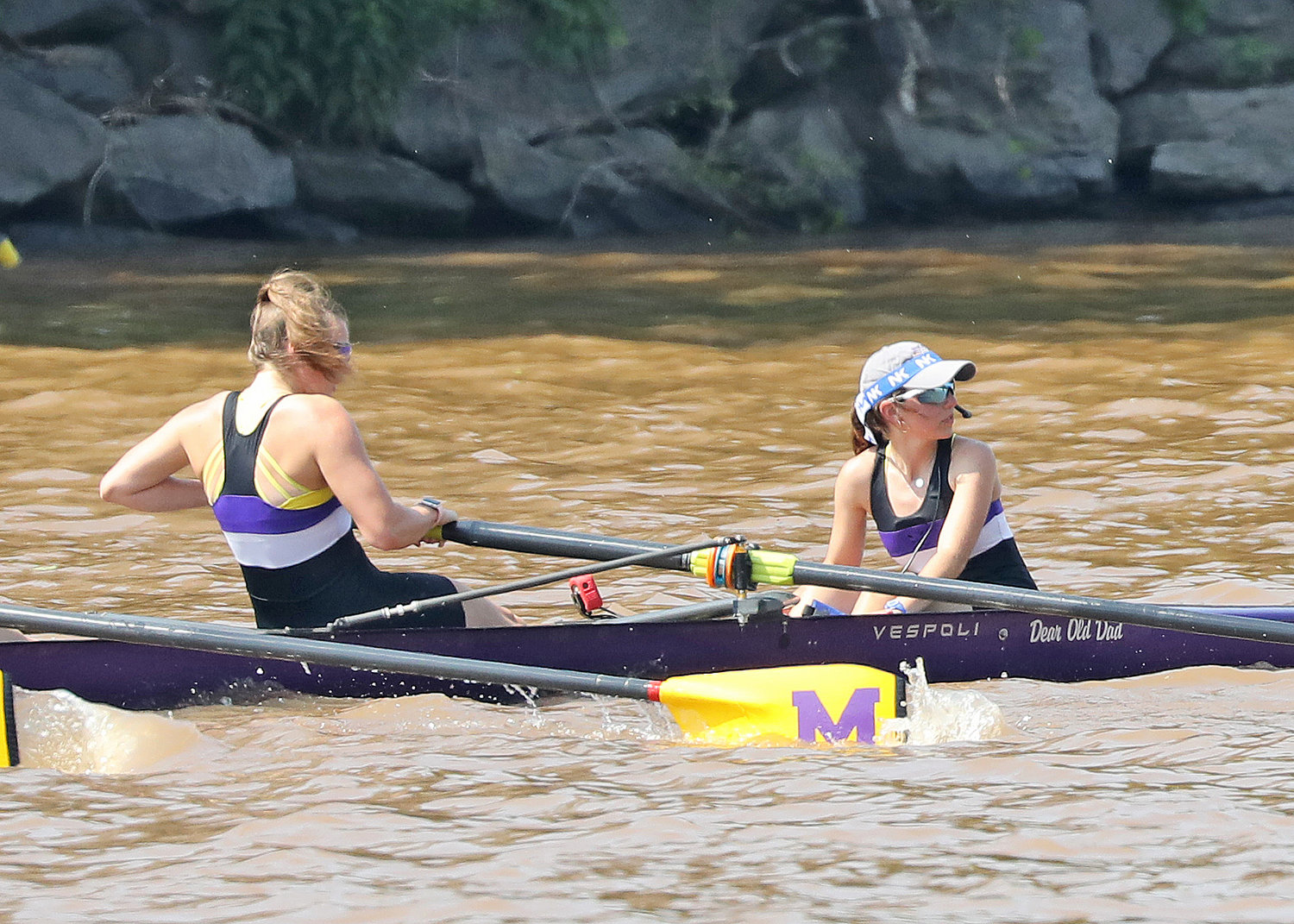 While junior Kelly Cleary pulls in the stroke seat, senior cox Annmarie Wallis checks out the competition in the senior eight. She'll join the program at Notre Dame; her father, Mike, was a coxswain at the U.S. Naval Academy. 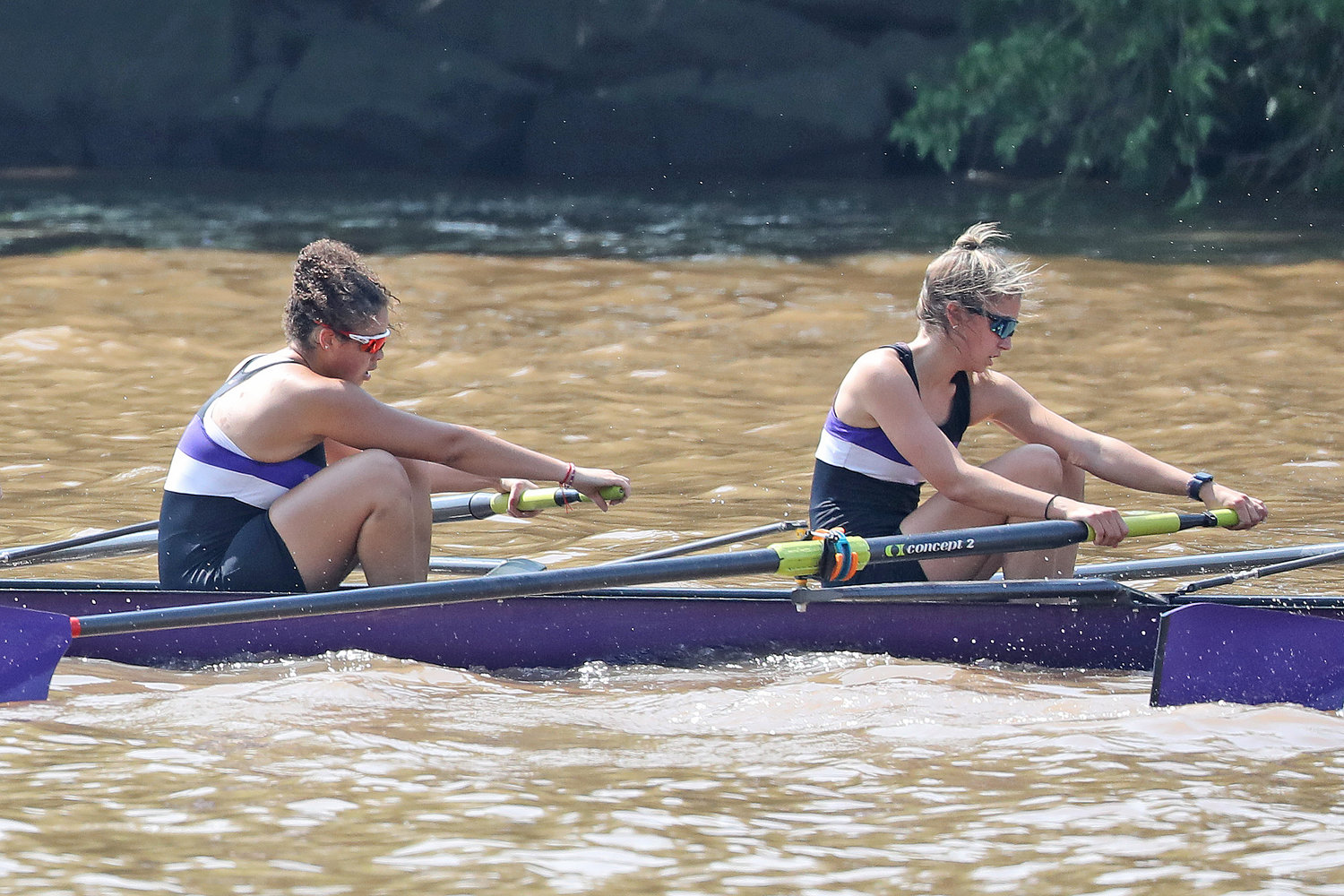 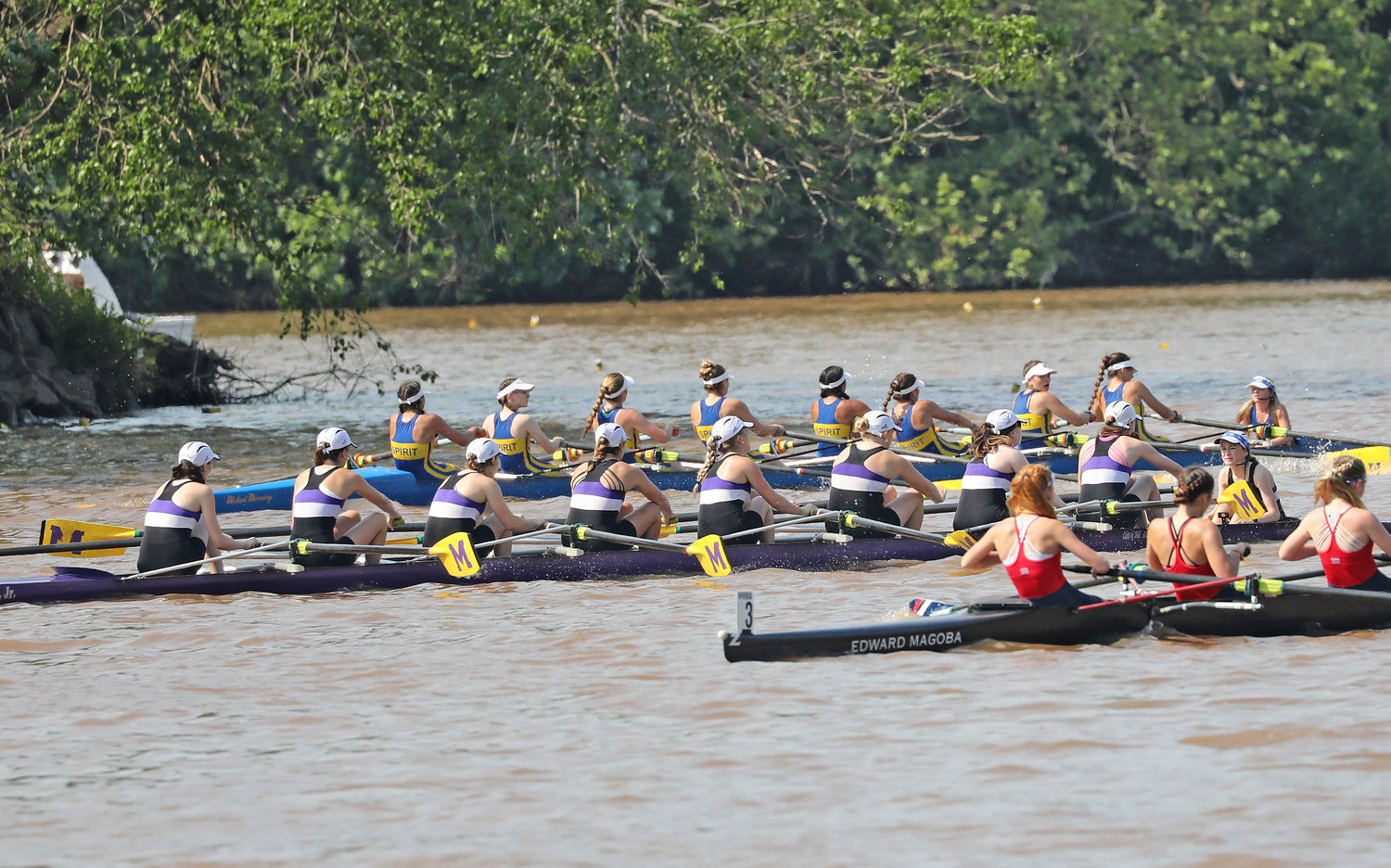 Last Friday and Saturday Mount St. Joseph Academy upheld a long tradition of success at major crew events as the Magic competed in the 95th annual Stotesbury Cup Regatta on the Schuylkill.

All eight of the boats entered by the Mount advanced past the initial time trials, six reached the finals, and five brought home medals.

The varsity eight (or "senior" eight in Stotesbury-speak) overcame an out-of-state rival in a nail-biting finish to win the marquee event of the weekend and the Robert Engman Trophy. The Magic's second eight, junior eight, and lightweight four also struck gold, the freshman eight earned a bronze medal, and the junior four finished fourth.

Mount St. Joe's second four (Ava Vavra-cox, Gabrielle Basiura, Maddy Wynn, Julia Burns, Anna Simola) was timed seventh in the trials, earning a place among the 12 boats moving on to the semifinals. However, Friday downpours that caused risky rowing conditions on Saturday morning caused the schedule to be shortened. In this event and a number of others, the semifinal round was scuttled and only the six fastest crews from trials went directly to the finals.

In an expansive field of competitors in the senior four, the top 18 boats from trials advanced into one of three semifinal contests. The Mount (Maddie Allen-cox, Devon Lasky, Brianna Montgomery, Michaela Kowlaski, Sarah Burns) just made the cut with the 18th-place time, but in the semifinals only the top two boats in each section would move on to the final round. The Magic came in fifth in the first semifinal.

They won the second semifinal with a time fractionally faster than the winner of the first section, Edgewater High School of Orlando, Fla. Edgewater, the fastest boat in the time trials, won the gold medal in the finals, where the Magic came in fourth behind Blair Academy and Atlantic City High School.

In the freshman eight, National Cathedral School of Washington D.C. proved fastest in the time trials and also in the finals, taking the gold medal. The ninth-graders from the Mount (Kylie Reichert-cox, Maddie Kristel, Maggie Mullaney, Alexia Levine, Katie Scanlon, Molly Chipman, Zoe Truitt, Vanessa Ksiazek, Lila Forti) had been second in trials, and they ended up as bronze-medal winners. Montclair (N.J.) High School eased in ahead of them for the silver medal by just 0.15 seconds.

Mount St. Joseph had a distinguished history in the lightweight eight category, but there has been scant participation in this class in recent years, and some major regattas have dropped the event. The Magic followed the trend but are still putting out a strong lightweight four, which this year features coxswain Chloe Van de Meulebroecke and oarswomen Aoife Meacle, Grace Kyle, Norah McGlynn, and Sonia Marhefka.

They were second in the time trials to Catholic Academies rival Merion Mercy, and both crews easily made it into the finals even with the semifinal round being scrapped in their grouping. In the medal race the Mount outsped Merion by a second-and-a-half to win gold, with the bronze medal going to a Florida franchise from Lake Brantley.

The junior eight from the Mount (Angelina Baker-cox, Clara Pagano, Sabrina Borzi, Nina Rowello, Maya McCottry, Alexa Kennedy, Ellie Fazio, Emily Feilke, Kari Prosperi) has performed well all spring and continued to due so at Stotes, starting out with second place in a time trial won by Montclair. The two met again in the finals, with no semi's in between. This quickly became a two-boat race and then a one-boat race as the Mounties won the battle over their Jersey rivals by nearly five seconds. Bronze medalist Holy Spirit, another Garden State squad, was another seven seconds back.

Wilson High School, from the nation's capital, was first in the time trial, just ahead of the Magic. In the finals, less than a second-and-a-half separated the second-through-fourth-place boats, but the Magic secured the goal medal six seconds ahead of runner-up Wilson.

Wilson had appeared on the Schuylkill earlier in the spring with a fast varsity eight, and in the Stotesbury trials the Washingtonians were timed second, one second behind the Mount (Annmarie Wallis-cox, Kelly Cleary, Kathryn Sponseller, Maggie Horgan, Leah Manzo-McCottry, Sarah Powell, Alexa Konowal, Caroline Johnson, Grace Hartzell).

There were three semifinals, and the Magic's winning time in the first race was slower than that of the winners of the other two sections, Wilson and Moorestown (N.J.) High School.

In the finals, the three semi winners separated from their rivals. Moorestown was a little behind the other two, who were neck-and-neck nearing the middle of Peter's Island. The Magic accelerated and led by almost the length of the front deck at the lower tip of the island.

Wilson countered though, and it took the Mount one final push to win the gold medal in four minutes, 50.10 seconds over the Tigers (4:50.84). Moorestown secured the silver medal in 4:52.47, six ticks ahead of the fourth-place crew.