Two articles in these pages recently mourned (and explained) the loss of the iconic tree that gave Chestnut Hill its name.

Ned Barnard (“Hunting for the American Chestnut in the … 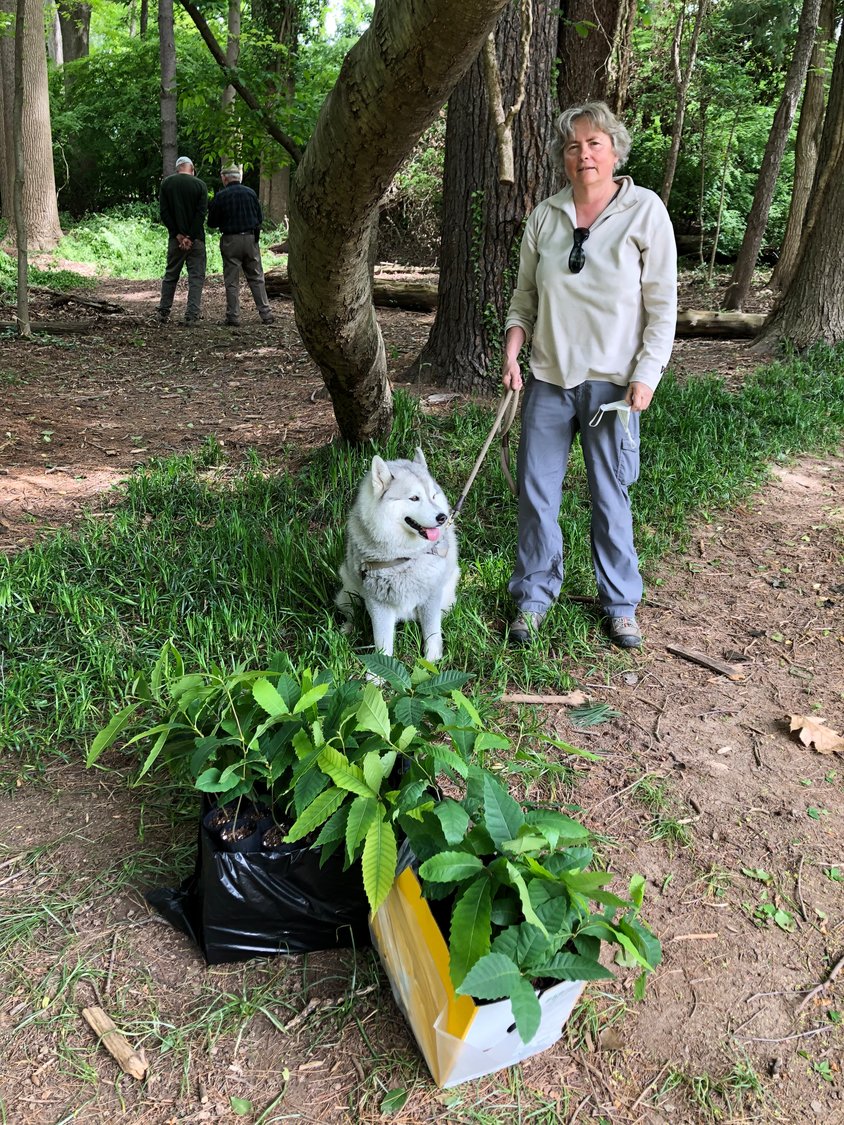 Tracy Gardner, President of the Friends of Pastorius Park and Taiga admire newly-delivered chestnut seedlings.
Posted Friday, May 28, 2021 10:20 am
by Robert Fleming

Two articles in these pages recently mourned (and explained) the loss of the iconic tree that gave Chestnut Hill its name.

Ned Barnard (“Hunting for the American Chestnut in the Wissahickon,” August 27, 2020) reports hiking uphill of the Valley Green Inn in hopes of finding “a remnant of the virgin forest” but being “disappointed not to find any large oaks…just more tulip trees, and no chestnut twigs sprouting from old stumps.”  (Ned is co-author, with Catriona Briger and Paul Meyer, of Philadelphia Trees:  A Field Guide to the City and Surrounding Delaware Valley.)

Former director of the Schuylkill Center, Dennis Burton (“Back to Nature: Chestnuts in Chestnut Hill?” March 12, 2021) paints a dire panorama of the extinction and extirpation of Pennsylvania’s native plants, including the American Chestnut.

In joyous contrast a third article (“SCH Takes Step to Reclaim American Chestnut’s Place with New Grove of 70 Trees,” September 18, 2019) describes the largest of several initiatives that are bringing Chestnut trees back to the Hill.

Springside Chestnut Hill Academy joined with the American Chestnut Foundation to establish a demonstration and education orchard.  The Foundation (acf.org) provided the School with guidance and live seedlings of a potentially disease-resistant variety developed via traditional cross-breeding of native and Chinese chestnut stock.  (Rebreeding by the Foundation over thirty years has gradually diluted the foreign genetic material, preserved some of its blight resistance, and yielded a tree that is essentially the North American original.)

The Friends of Pastorius Park recently launched a similar restoration, thanks to the prompting and commitment of its long-time arborist Erik Werner (owner of Hedgerows Tree Service and an informed chestnut enthusiast).

On Saturday, May 15 a trio of volunteers under Erik’s leadership planted a grove of timber-type (wild) American Chestnuts in the Park’s wooded northwest corner.  In contrast to the SCH planting, Pastorius’ young seedlings are not disease-resistant and may not live to adulthood.  But these “mother trees” will live long enough to be pollinated in adolescence and produce children (nuts: chestnuts) fathered by a new variety genetically armed against the effects of the blight that destroyed the chestnuts in America’s Eastern forest.

This variety (Darling 58), a product of research at SUNY College of Environmental Science and Forestry (esf.edu/chestnut/), awaits regulatory clearance.  When it becomes available the Friends will receive and plant an individual—the metaphorical father—in the center of the waiting Mother Tree Orchard.  Following fertilization, volunteers will watch for the blight-resistant, transgenic nuts to mature and collect them.  After these sprout, they’ll be planted in the wild.  The scientific term for this is “intentional introgression.”

The protections installed at the Pastorius planting make the new orchard easy to spot.  This local project is one of dozens underway throughout the species’ original range, a large-scale, wholly volunteer effort that Friends of Pastorius Park is delighted to join.

There are other efforts to reintroduce the native chestnut in Chestnut Hill, and these deserve mention.  Landscape designer and chestnut enthusiast Christopher Sohnly of Spruce Hollow Designs (sprucehollowdesigns.com) has been quietly importing and offering for sale chestnut seedlings descended from promising survivors found in northwestern Pennsylvania, specifically the Sproul state forest, where there is as much as 10% to 15% resistance found in native seedlings.  (The collector is Christopher’s colleague, Ethan Olson of Walburn Run Nursery, Brockway, Pa).  In 2017 Christopher donated two of these to a Tree Tenders demonstration planting at the intersection of Lincoln Drive and West Springfield Street.  So far they are flourishing and easy to observe.

If scientific breeding created SCH’s introductions, and if genetic engineering will strengthen the offspring and descendants of those in Pastorius Park, Christopher’s approach — targeted selection, or what Ethan calls ‘extreme natural selection’ — is a third way.

This traditional, long established and intrinsically optimistic method has captured the attention of the Chestnut Hill Community Association’s Greenspace Initiative, likely soon to join the community-wide restoration in progress.

Finally, it’s possible to observe several hybrid American Chestnuts planted in 2010 at the Morris Arboretum.  One of these is growing in the woods adjacent to and below Out on a Limb.

With luck and the commitment and persistence of those dedicated to the cause, the American Chestnut may thrive again in the forested neighborhoods of Chestnut Hill.

Chestnut Hill resident Robert Fleming is a Landscape Architect with an interest in historic preservation and ecological restoration.

Hunting for the American Chestnut in the Wissahickon
Back to Nature: Chestnuts in Chestnut Hill?
SCH takes step to reclaim American chestnut