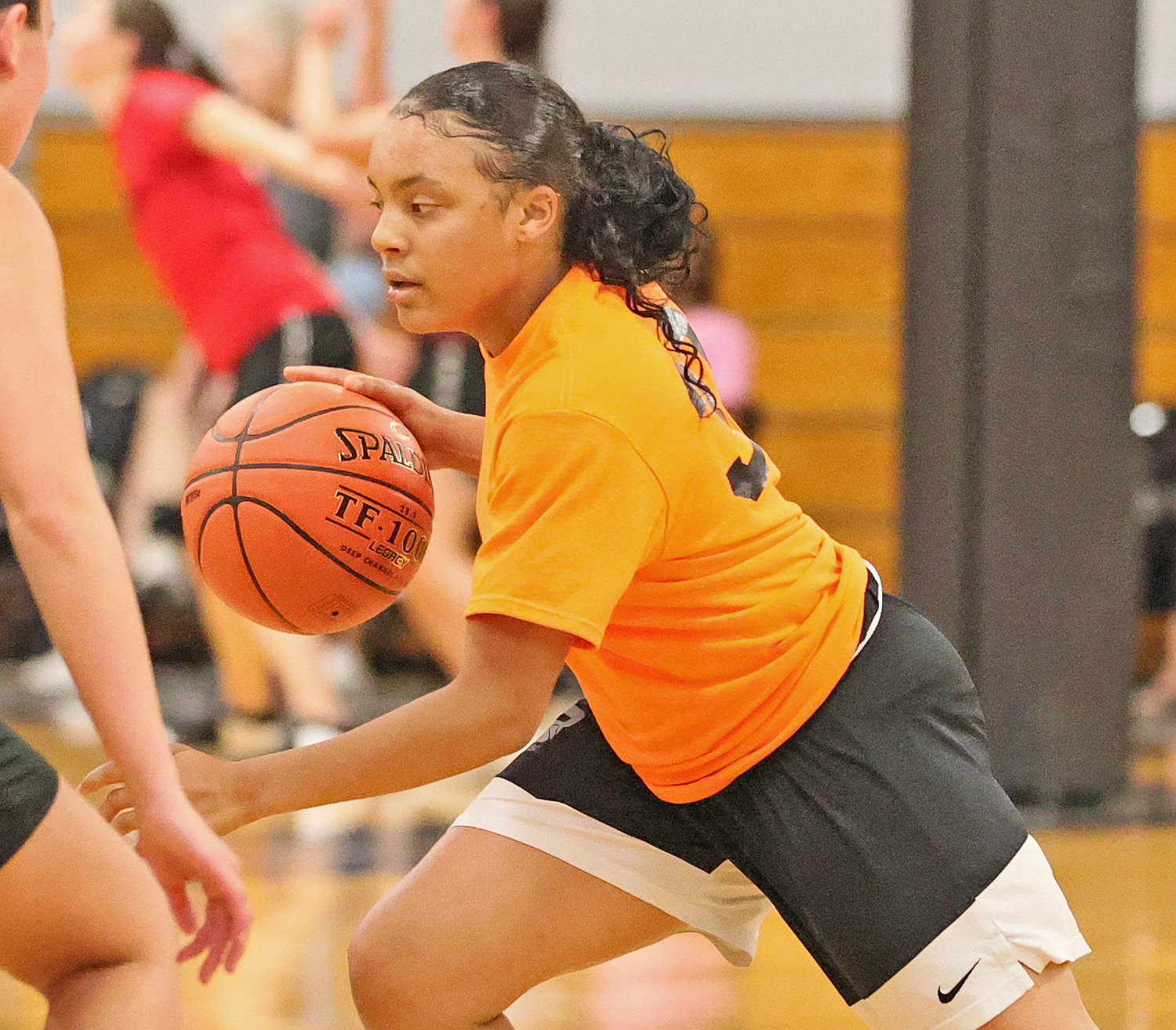 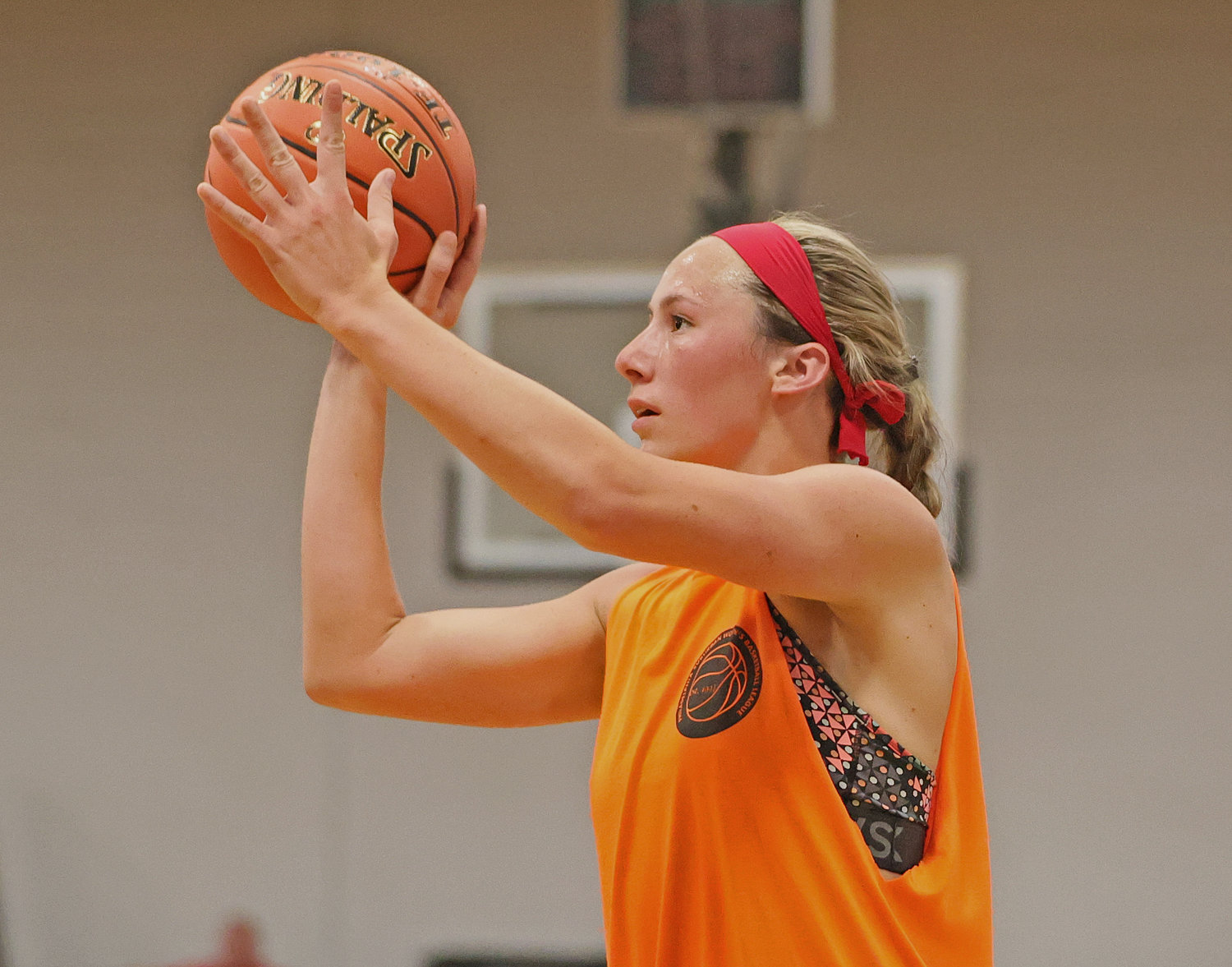 Kait Carter, a 2020 Penn Charter graduate, is playing with her Chestnut Hill College teammates in the summer league, but this past winter her freshman season was eliminated by COVID-19 restrictions. (Photo by Tom Utescher)
Previous Next
Posted Wednesday, July 14, 2021 10:00 am
by Tom Utescher

The area athletes playing summer basketball for their colleges experienced mixed results last week. In the early evening session, the Chestnut Hill College women on Team Orange encountered some rivals from their own Central Atlantic Collegiate Conference, namely Team Sky Blue and its compliment of players from Holy Family University.

Recovering from a concerning early deficit, the summer Griffins closed within a basket or two of Sky Blue a number of times, but couldn't quite draw even. CHC succumbed, 60-51.

Sarah and Charlotte DiLello, former Germantown Academy athletes, made out better as they played alongside their Ursinus College colleagues on Team Royal Blue later in the evening. Their opponent, Team Red (Arcadia University), trailed most of the way, making a few comeback attempts but then seeing the Royals open up a double digit lead late in the game. The final here was 52-37.

In the earlier game Holy Family went up 4-0 before senior Brianna Hewlett got Team Orange on the board. Then, while the warm weather Griffins added a point on a free throw by Penn Charter grad Kait Carter ('20), Sky Blue popped in two three-pointers and two shorter shots from the floor to go up 14-3.

Two incoming freshmen put the brakes on CHC's skid. Guard Morgan Sterner scored two transition baskets, one set up by rising senior Abby Spratt. Freshman post player Emily Chmiel made both of her free throws when fouled by a Holy Family player. Still, a late trey allowed Sky Blue to double up Orange at the close of the first quarter, 18-9.

Two more treys in the second quarter helped Sky Blue lift its lead back into double digits (27-16) in the middle of the period, but three field goals and two free throws by Hewlett kept CHC hanging in. The half ended with a midrange jumper by junior Lauren Crim and Hewlett's third field goal of the quarter. Orange trailed by seven at the break, 35-28.

Crim and Sterner continued to score as round three progressed, but Holy Family kept its distance with long range shooting. With the period winding down, Sky Blue again had widened the gap to 11 points, now 47-36. Again, Chestnut Hill was able improve its standing by the end of the quarter, receiving two free throws by Hewlett and a breakaway basket by Carter to make it 47-40 at the three-quarter mark.

Sterner cut the lead to five with a lay-up at the start of the fourth frame. Next, senior guard Cassie Sebold was fouled on a successful drive, and when she made her free throw, as well, the Orange outfit was just two points behind, 47-45.

Once again, though, Holy Family's Tigers of summer quickly regained control when they seemed close to losing it. A three-point basket was followed by a steal and a transition lay-up to lever the lead back out to seven points. The Orange team's young post player, Chmiel, scored four points late in the quarter and played tough defense, but Sky Blue continued to put together back-to-back baskets when it needed to.

Lindsay Tretter, an Archbishop Wood grad who will be a senior at Holy Family, registered a game-high 14 points, netting four three-point shots. Sterner led the Griffins with a dozen points and Hewlett came away with 10, while Chmiel and Crim contributed nine points apiece. Sebold scored six for the Orange, Carter had three points, and Spratt scored two.

In the clash between the ersatz Ursinus and Arcadia squads, the Ursinus Royal Blue carved out a 12-7 lead during the first quarter. The DiLello sisters started the second quarter for Royal, and after the Red scored on a drive, Sarah DiLello stuck a jumper from above the foul line and then Charlotte followed in a teammate's missed shot.

Players on both teams made many athletic moves to the hoop, but few of their shots went in. At the intermission Royal was up 23-20, and with under three minutes left in the third quarter, it was still a three-point affair (31-28).

Royal scored three consecutive field goals to end the period with a nine-point advantage, and this time they kept Arcadia at arm's length. As the clock dipped under four minutes remaining in the fourth quarter, one last push by Team Red got them back within eight points, 43-35. Sarah DiLello quickly countered for Royal Blue with a lay-up, and later she scored in transition off of a pass from Alyssa Martin, a rising junior out of Gwynedd Mercy Academy.

There was a comfortable 15-point margin at the end. In a league where they have to face a number of teams staffed with Division II players, it was nice for the Royal Blue bunch to face another Division III squad and come out on top.