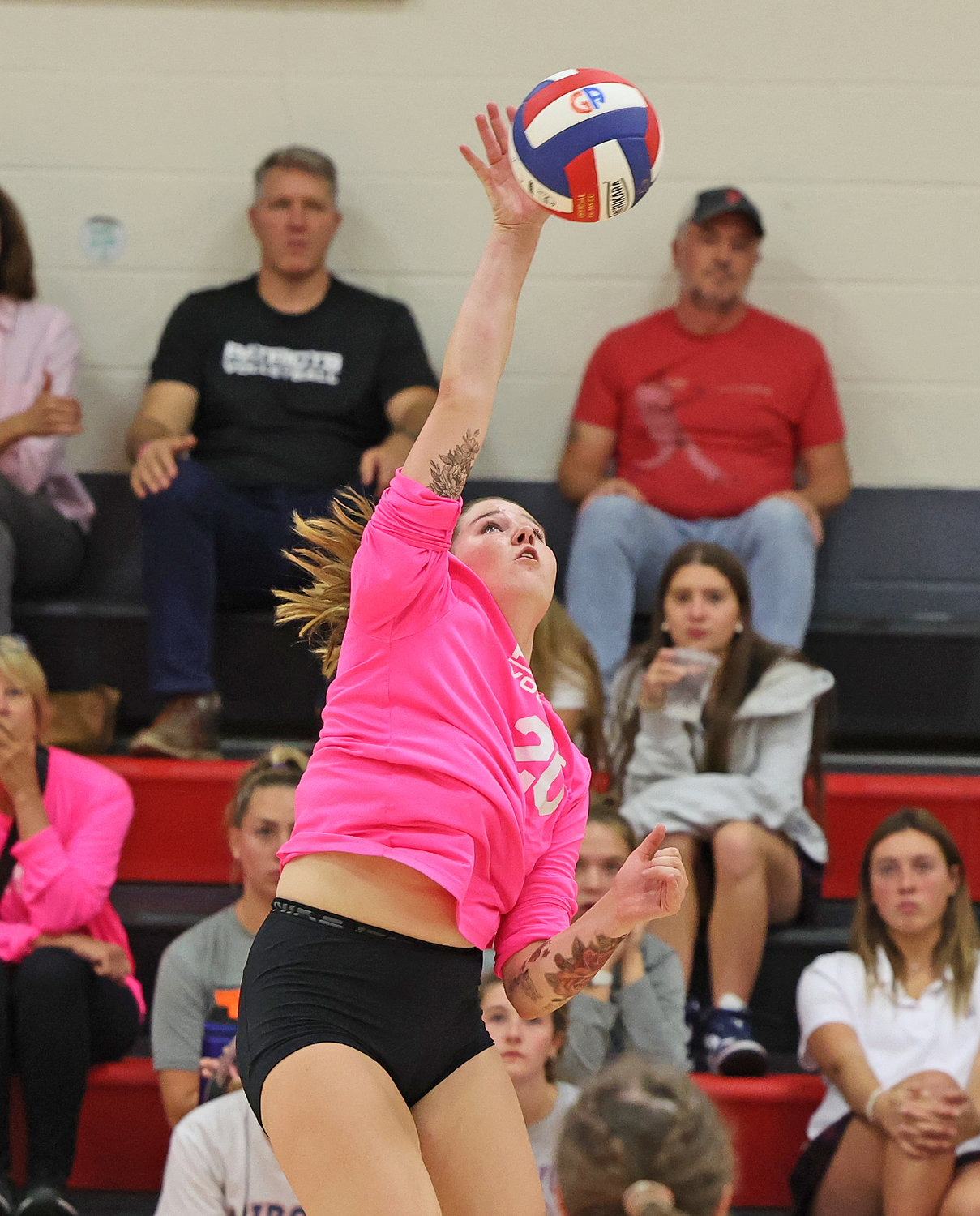 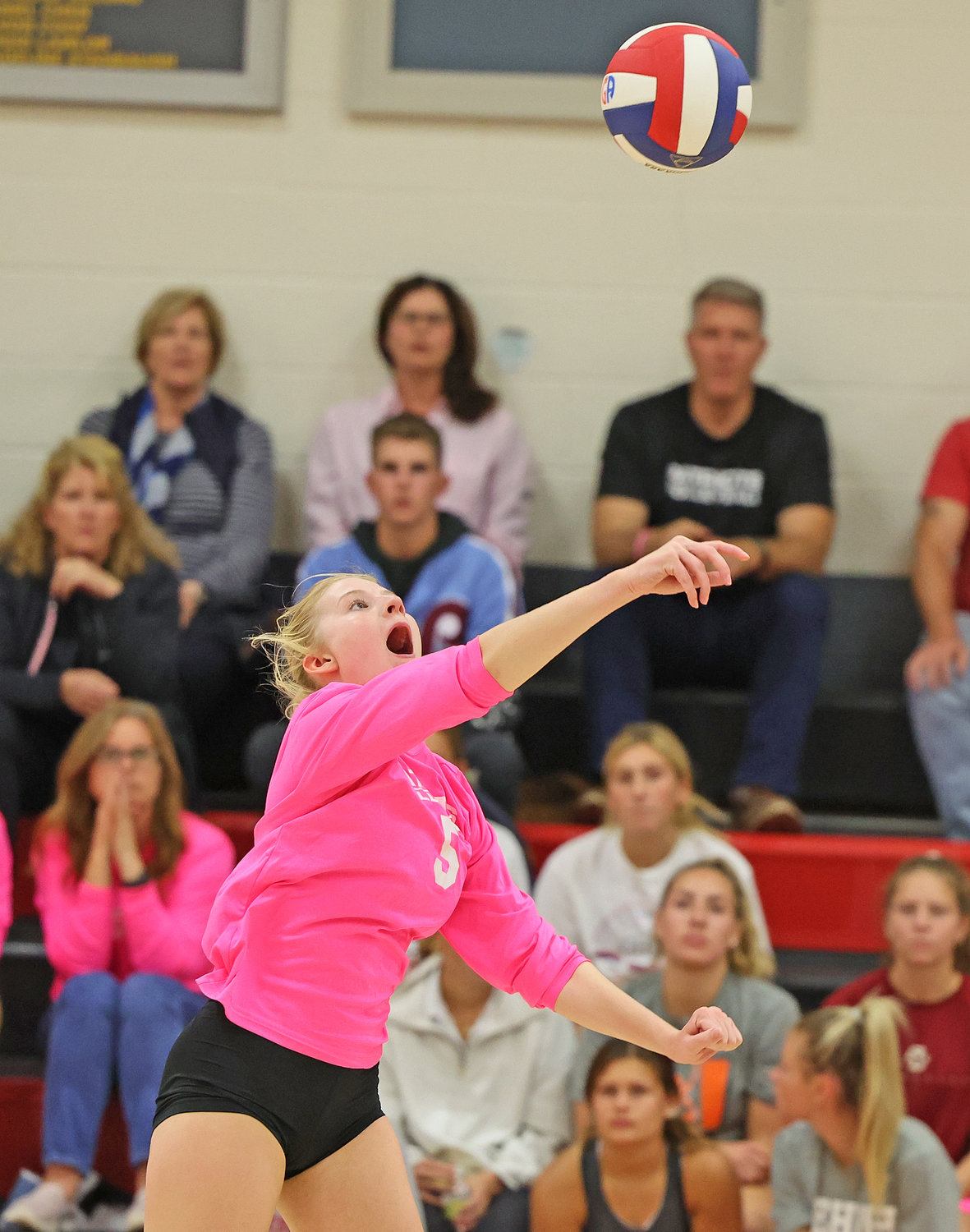 Patriots junior Kaitlin Pokorny takes a swing from the left outside spot.
Photo by Tom Utescher 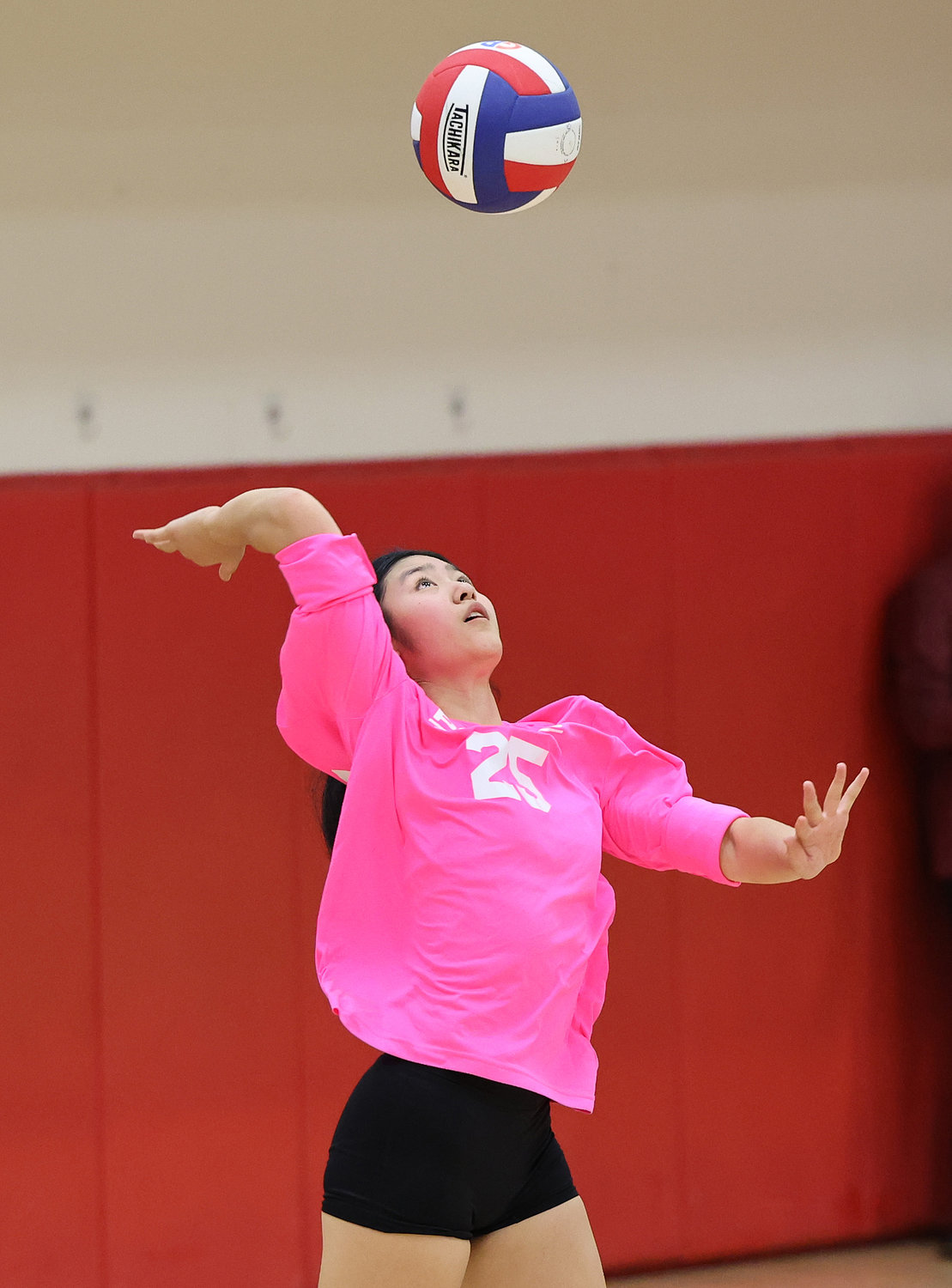 Junior Angie Wang, the Patriots' primary setter, winds up for a serve.
Photo by Tom Utescher 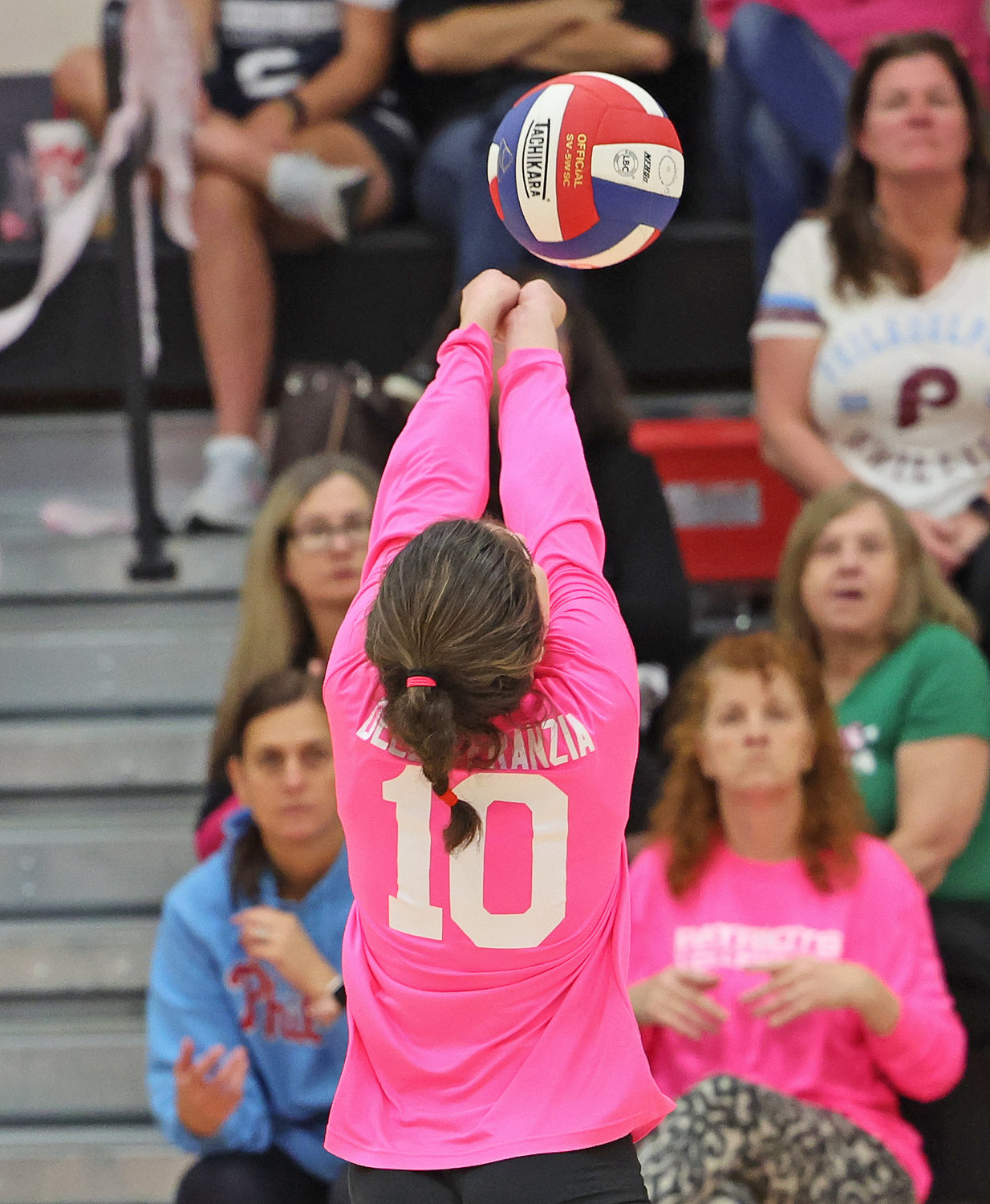 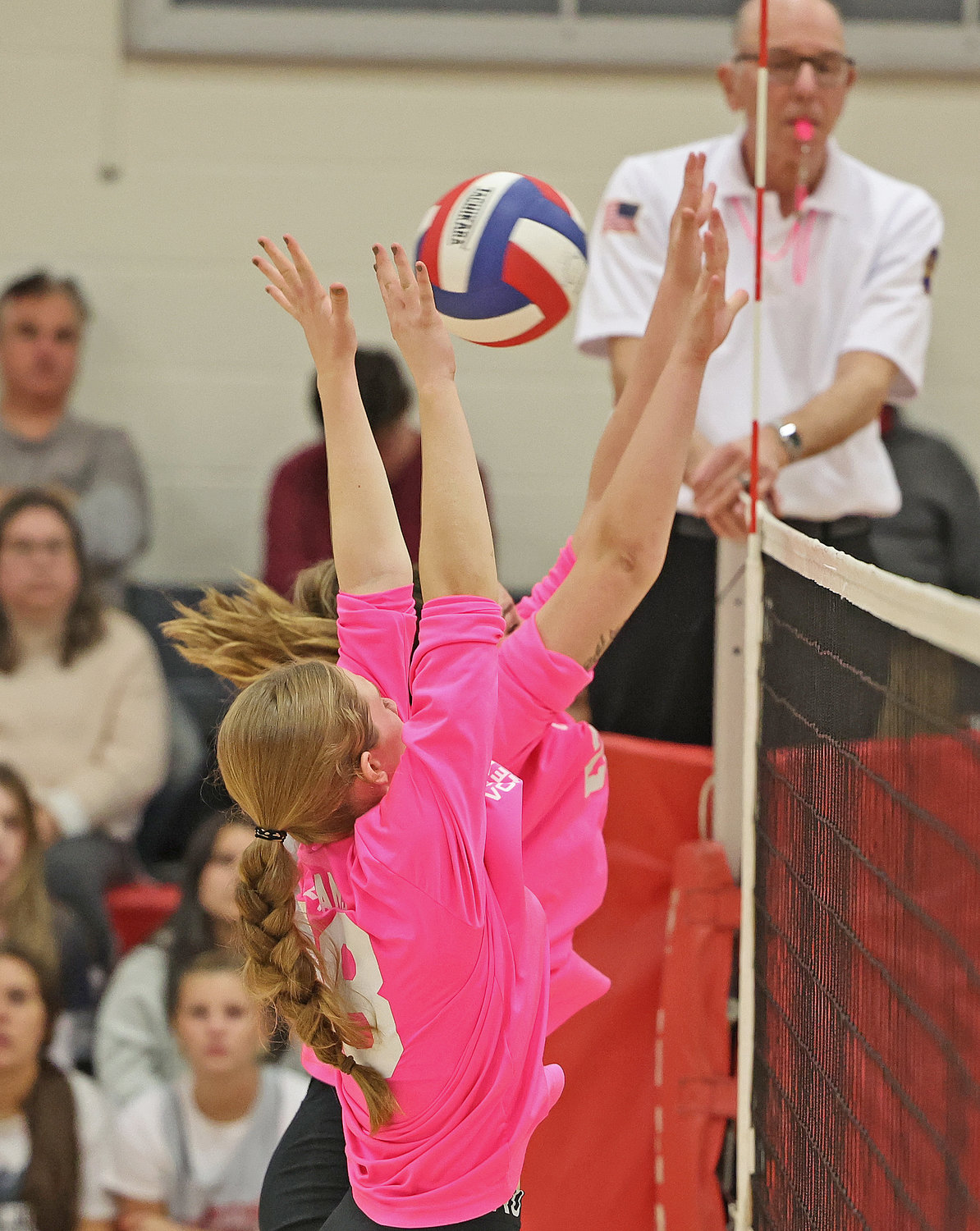 Patriot blockers, including sophomore Hadley Evans (foreground) go up after the ball.
Photo by Tom Utescher 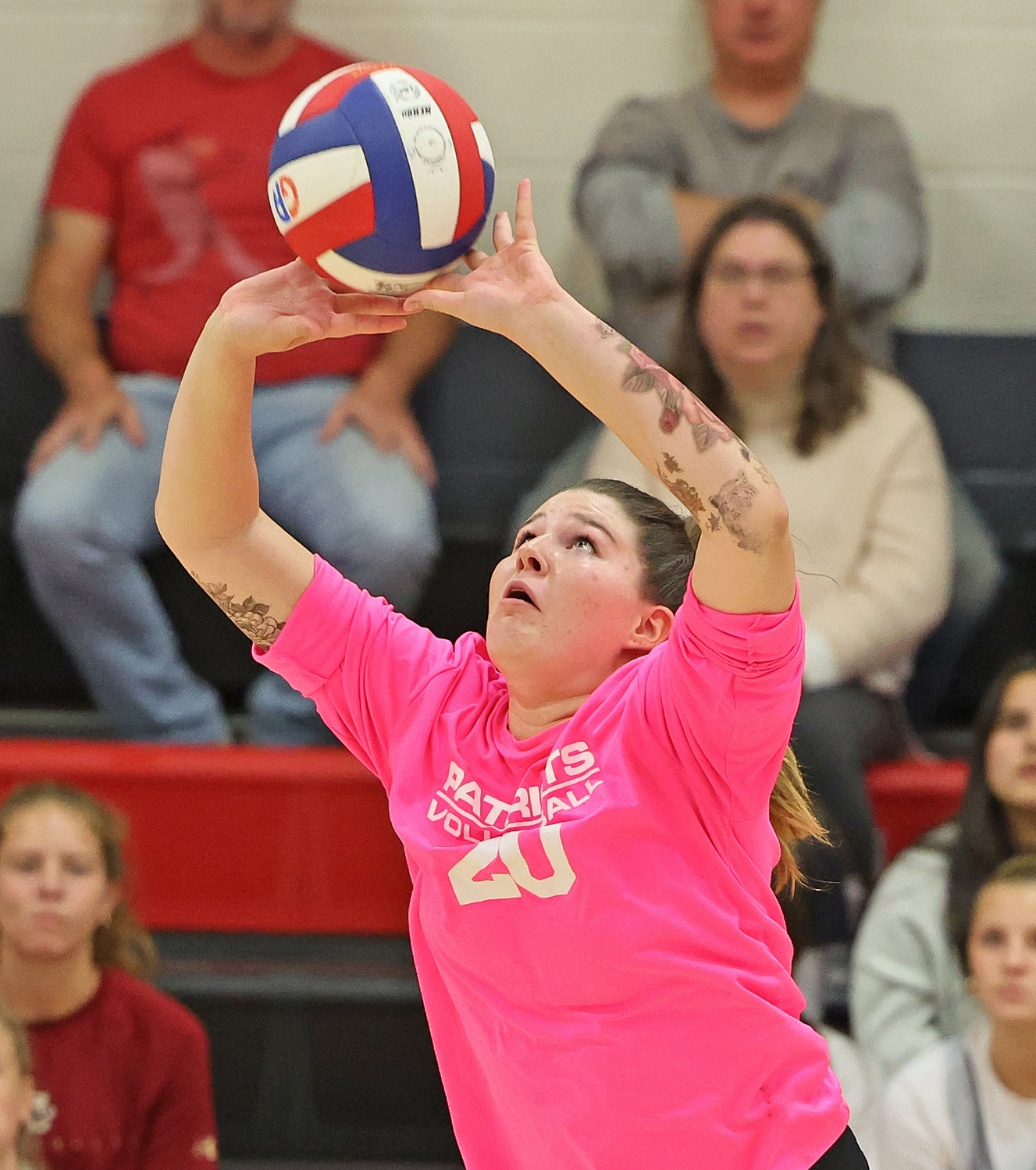 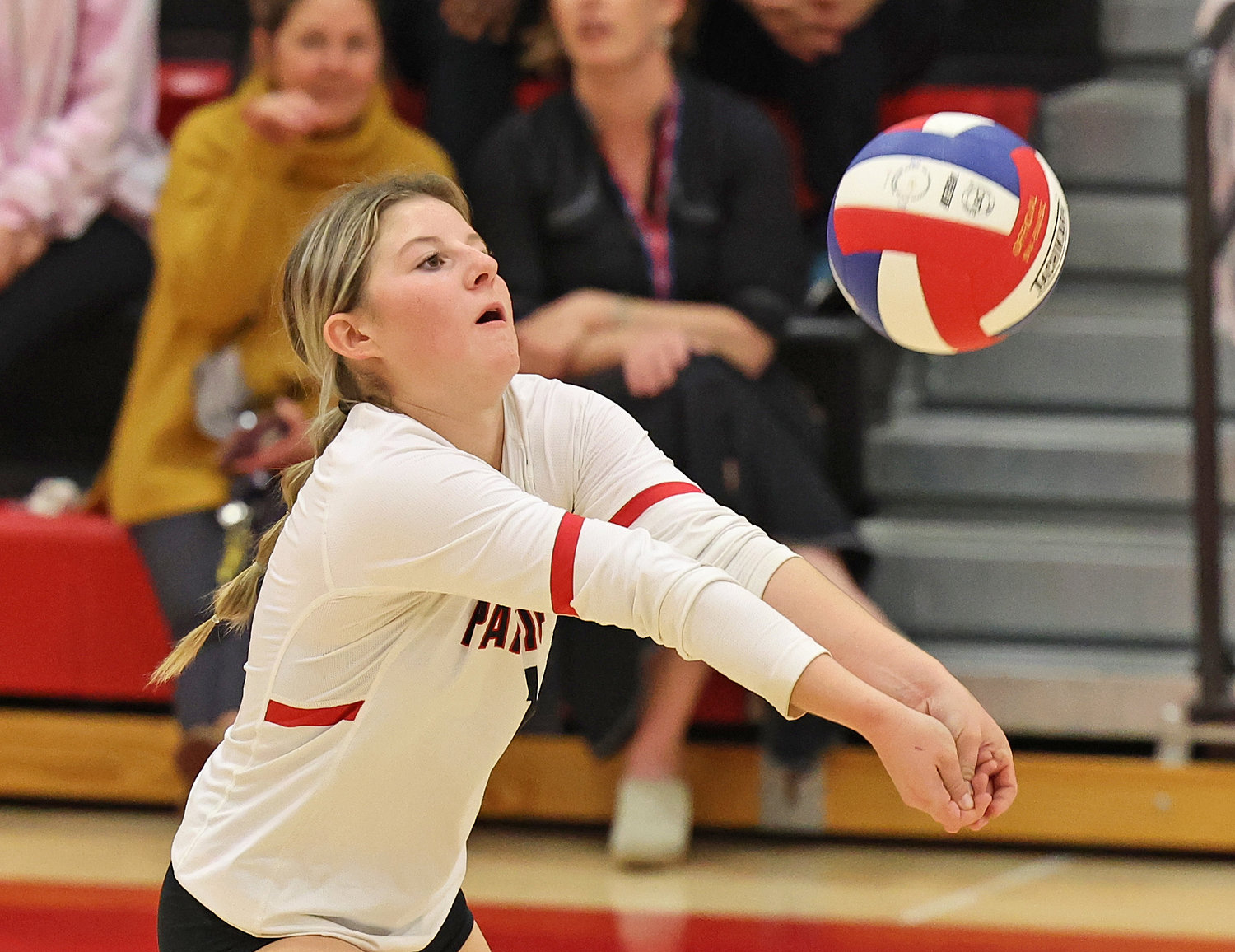 The Patriots' sophomore libero, Olivia Reynolds, controls the ball on a Baldwin serve.
Photo by Tom Utescher
Previous Next
Posted Wednesday, November 9, 2022 12:00 am
by Tom Utescher

GA head coach Chuck Dougherty said that in his team's two regular season wins over Baldwin, "We lost a set to them each time, but they really weren't as competitive as today. They played very well and we really had to fight to beat them."

Both teams had received a bye for the first stage of the PAIS tourney, then the GA Patriots dispatched ninth seeded Shipley School, 3-0, while Baldwin upset number four Agnes Irwin, 3-1.

Advancing through the lower half of the bracket to meet GA was the defending PAIS champion, Academy of Notre Dame, which posted 3-0 wins over Springside Chestnut Hill Academy (seventh seed) and Perkiomen School (third seed) in the quarterfinals and semifinals.

In 2021, Agnes Irwin eliminated GA in the tournament semifinals, then lost 3-1 to Notre Dame in the championship match.

This season is Dougherty's second with the Germantown Academy program.

He pointed out, "A lot of the things we wanted to teach them, the aggressive play, the aggressive serving, the aggressive back row, are now in-system as opposed to being brand new last year. Last year our setter, Angie Wang [a junior] was out, and having her back has made a huge difference."

As last Wednesday's semifinal bout at GA got underway, visiting Baldwin didn't seem to realize it was supposed to be the underdog. The Bears ran off the first four points, then kept on going until GA called a time-out, down 3-10.

At first the peptalk didn't appear to have an effect as the Bears won the next two points. Finally, GA got a side-out with senior Elizabeth Smith's hit to the right rear corner. The Patriots slowly climbed back in it, getting a scoring tip by Wang and multiple hits from junior Kaitlin Pokorny. It was Baldwin that now had to call a time-out, its lead down to just two points, at 14-12.

Soon after that, GA pulled even for the first time, 18-18, as the Bears couldn't handle a line-drive serve just over the net by the Pats' sophomore libero, Olivia Reynolds.

Baldwin trailed 21-20 but had the serve when a hit by sophomore Hadley Evans from the middle spot secured the side-out for the hosts. Another kill by Evans and a return error by Baldwin brought up set point at 24-20. A "quick" by Wang, pushing the ball over the middle of the net on the second touch, wrapped up the opening set.

A Baldwin error gave the first point of set two to GA, but the Bears soon went ahead, leading 12-8 when the Patriots called a time-out. Later on, Germantown found itself in a real bind as the visitors attained a 24-20 advantage. They got a gift when the Bears' next serve went long, and then Baldwin was called for a double hit that made it 24-22.

A quick by Wang and a relatively soft hit by sophomore Caroline Smith that scored off a Baldwin block evened things up at 24-24. This time, though, the Pats could not sustain their late momentum. They hit one ball long to give Baldwin an edge, then a tip at the net gave the Bears set point at 26-24.

In set three, the home fans finally witnessed the GA team they expected to see. The Patriots scored the first four points and soon were ahead 8-1. Midway through the set Baldwin was still within striking distance with a 13-9 deficit, then GA got a side-out and had Caroline Smith go back to the service line for an eight-point run. Scoring by Pokorny and Evans was supplemented by a number of Baldwin mistakes, the Pats found themselves in a dominant position, leading 22-9.

The visitors eked out a few more points, but eventually GA nailed down set point, 25-13, when there was a very high pass over the net and the ball was redirected by a rafter near the ceiling, befuddling the Bears.

Baldwin picked a few more points in the fourth set, but the Patriots had clearly found their rhythm and weren't going to be denied.

GA scored with a block and with Wang's tip off a block as part of a 4-0 start. Baldwin got back in contention, then kills by Elizabeth and Caroline Smith helped power a six-point Patriots run with Wang at the service line. A little later, Baldwin called time-out, down 16-10. Soon, the score had risen to 19-12, then a serving error kept the Pats from getting to the 20-point mark, which can subconsciously be discouraging for the other team.

The Bears bumped their total to 14, then Germantown got to 20 on a hit by Pokorny that hit a Baldwin block and dropped to the floor on the Bears' side. Two points for the visitors were sandwiched around another Pokorny kill for a 21-16 tally.

There was an extended rally for the next point, with freshman Abigail Traina keeping GA alive with a great dig just inches off the floor. The sequence ended in GA's favor when the visitors hit the ball into the net.

Baldwin squeezed out one more point, and GA finished with three swings by Caroline Smith. On the last one her ball dropped down off of a Baldwin block, sending the Patriots on to the finals.

Asked how he would describe his team to an outsider, Coach Dougherty responded, "They're aggressive, fearless. We don't play safe - we try to put the ball away. A major part of our game is hitting the ball from the back row and serving aggressively."

Although five players will graduate off of this year's varsity roster, Dougherty noted, "Our main offense is still juniors and sophomores, so they're still growing."