If you think driving on Germantown Avenue can be a headache now, imagine how travelers must have felt back in the 18th century when the thoroughfare was known as “the worst road in America.” 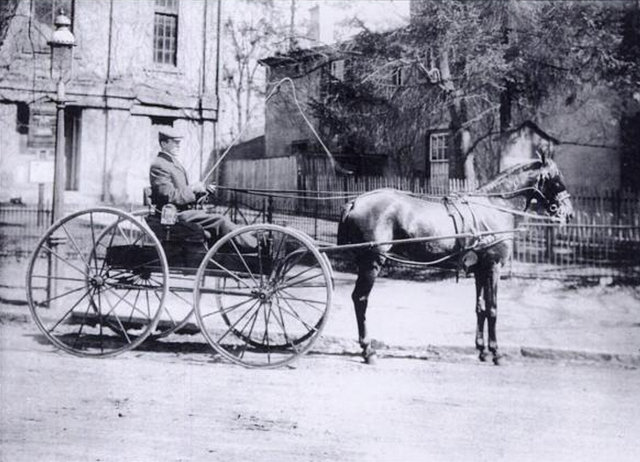 A carriage is seen on Germantown Avenue outside of the Chestnut Hill Baptist Church at some point in the 19th century. Before the Avenue was paved in 1802, a horse and carriage such as this would have had to make a trip from Chestnut Hill to Philadelphia under the most difficult conditions, ranging from deep wheel ruts to armed highway bandits preying on unsuspecting travelers. (Photo courtesy of the Chestnut Hill Historical Society)

If you think driving on Germantown Avenue can be a headache now, imagine how travelers must have felt back in the 18th century when the thoroughfare was known as “the worst road in America.”

Before it became known as Germantown Avenue, and before it was called a medley of names, such as the Great Road of Germantown, Skippack Road and Main Street, the road was no more than a trail. The Lenni Lenape people originally used it as a footpath, which was a vital part of their settlement. It wasn't until after the original settlers arrived from Germany that it was expanded to serve as a main road.

Back then Chestnut Hill was a primitive village, a gateway community that helped connect the resources of the countryside to the city of Philadelphia. Its main road was traveled upon extensively by farmers and merchants who were looking to make it to the city to trade and sell their goods. But despite the amount of traffic the road saw on a daily basis, it wasn't paved until 1802.

Peter Kahl, a Swedish botanist who was exploring North America in 1748, said the soil around Germantown was “brick colored clay, mixed with a sand of the same color.” This meant that in the summer the road was virtually dust, and in the fall, spring and winter no more than a muddy swamp. For the merchants having to travel this road to make a living, this would prove to be a nightmare.

Wagons and carriages often had their wheels caught in deep ruts. There was allegedly quicksand by Fairhill that “swallowed carriages whole.” Elsewhere, wagons loaded with goods would sink into the mud, along with their horses, who often injured themselves so severely that by the end of the journey they needed to be put down. Those that weren't debilitated would practically have to swim in the mud at a speed of two or three miles an hour, which meant that a trip from lower Germantown to Philadelphia could take upwards of five hours.

If the road itself wasn't dangerous enough, there was also roaming highwaymen that would lurk within the surrounding wilderness and wait for unsuspecting wagons to rob. One such story comes from the July 12, 1773, edition of the Pennsylvania Packet, the precursor to The Philadelphia Inquirer. The incident is said to have taken place at the bottom of Naglee's Hill, a spot which marked the beginning of Germantown.

“On Thursday evening last,” the paper reported, “between nine and ten o'clock, Mr. John Lukens of this city, on his way home, on the Germantown road, was stopped by two men, one of whom seized his horses by the head, and the other springing into the chair in which he was riding, clapped a cocked pistol to his breast and demanded the delivery of his cash, threatening if he made the least resistance to blow his brains out, but Mr. Lukens telling him he had no cash about him, the fellow made a blow at him with a club.”

Because of how menacing the trip from the rural outskirts to the city could be, a plethora of stores began popping up alongside the road to allow for merchants to trade and sell their goods without having to worry about making the trip to the city. Because of this, many of those store owners started to build homes around the road and establish a variety of businesses. This, in a way, can be said to be the genesis of Chestnut Hill.

However thriving the community was that lived around it, the road, if you can believe it, only worsened as the end of the century came near. In fact, it became so insufferable that a group of private citizens expressed their grief about the situation in a public forum. This specific quote comes from the “United States Gazette” on March 8, 1798, from “A Citizen”:

“The extreme badness of our roads will plead my excuse for not attending to our appointment. Never a day has passed for a fortnight without one or more incidents of carriages stalled, upsetting, breaking down or laming horses [etc., etc.]. We have perhaps as good stages as any on the continent, and what is of more consequence, sober, careful drivers; and yet neither of them have escaped accidents – why the legislature withholds from us a law that would give us a Turnpike (at a time when the the legislature of a sister state are making exertions for this purpose.)”

Eventually the citizens' complaints were taken seriously, and plans were set in motion at the beginning of the 19th century to “turnpike” the road. Construction followed soon after on what became only the second turnpike in America, with Lancaster Pike being the first. The bedding for the road was made up of heavy stone, wood and gravel, among other hard materials, and tollgates were established at five-mile intervals in Philadelphia – at Evergreen Street in Chestnut Hill, at Rittenhouse Street in Germantown, and at Turner's Lane near Fairhill. The first five miles of the road were completed in February 1802.

The opening of the turnpike solidified the idea that Chestnut Hill was no longer a gateway community, as merchants could now safely travel all the way to the city to trade and sell their goods. Most of the old country stores closed, but soon, all around the road, newer stores began to appear, each specializing in a different trade or product than the next. The neighborhood, once no more than a sprawling wilderness, had finally become a flourishing country village.