Get the scoop on Zsa’s Ice Cream shop in Mt. Airy

Get the scoop on Zsa’s Ice Cream shop in Mt. Airy 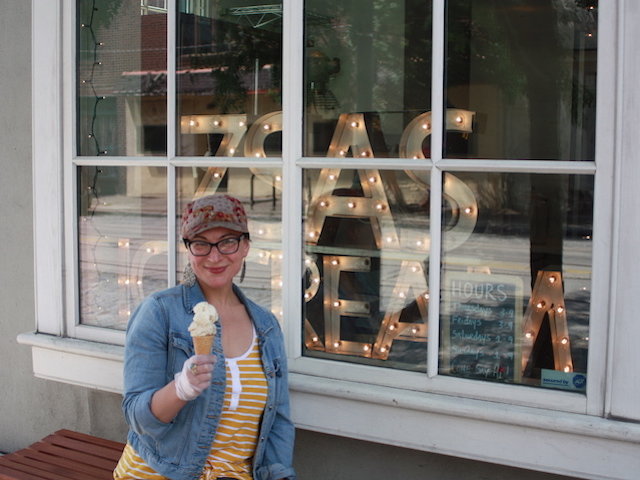 What could be better than an ice cream cone on a hot, humid day in August? A scoop of Zsa’s homemade, all-natural ice cream on a cone that you can get year-round at its new brick and mortar store at 6616 Germantown Ave. in Mt. Airy.

The Zsa’s Ice Cream’s motto is “Seriously from Scratch” because everything is homemade, including the caramel in its salted caramel ice cream, and its ice cream doesn’t contain any artificial flavors or colors. So, you won’t find bubble gum ice cream there. However, some of their seasonal flavors include lemon buttermilk, berry crisp, butter brown sugar peach and cookie butter. Some favorite year-round flavors include salted caramel and black magic.

Chestnut Hill resident Danielle Jowdy, owner of Zsa’s Ice Cream, said one of its most popular flavors is black magic. She said the shop makes its own coffee infusion that goes into the ice cream base and then adds her mom’s recipe for chocolate cake. Jowdy, who grew up in Connecticut, said her Mom used to make it for her dad’s birthday.

“My mom had this recipe that she got from my grandmother from the back of a can of Hershey’s cocoa,” she said. “It was the perfect cake to have with ice cream because it was similar to the texture of sponge cake. It was really porous, so the ice cream could melt into the cake, but it was also really dense – almost like a brownie texture. As kids, we always used to eat the cake with a scoop of ice cream on top. It worked really well put into the ice cream because no matter how you eat it, the cake is always really soft and gooey, and it never gets dry and crumbly, even when it’s frozen.” 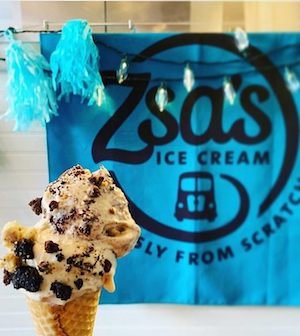 Jowdy, who was a former stained-glass artist before deciding to turn her hobby of making ice cream into a viable business, decided to open a “pop-up” store last December. The store only officially began scooping ice cream the last weekend in July.

She said a lot of Zsa’s patrons have come in the shop and told her how happy they are that there is a dedicated ice cream shop that’s open multiple days of the week year-round instead of only having one or two opportunities a month to track down an ice cream truck at an event.

Jowdy added that everything the shop ever sold was prepackaged because they were manufacturing for grocery stores and events.

“On the truck, the easiest way for us to serve a crowd of people was to offer everything prepackaged,” she said. “We laugh because we have been in business since 2011, but this is the first year that we ever scooped ice cream. It’s really a different experience because at this temperature you can really taste all the flavors, and the ice cream is just the right consistency.”

Zsa’s Ice Cream offers seasonal flavors such as cookie butter that customers can only get at the “scoop shop.”

“The cookie is based on a product called cookie butter spread,” she said. “The company takes ground-up gingersnap cookies and turns them into a product that is the consistency of peanut butter. It’s one of my favorite things to eat right out of the jar. So, I thought, ‘Why not make ice cream out of it?’”

Jowdy said the shop takes gingersnap cookies and lets them steep and dissolve in milk and cream. Then, it creates what she calls the “cookie butter magic shell.”

“We use the cookie butter, made from those same cookies, and turn it into a shell,” she said. “The flecks from the ‘cookie butter magic shell’ are hard when frozen, but melt as you eat the ice cream.”

This Local reporter tried several flavors, including cookie butter, butter brown sugar peach and black magic. It tasted like it was made fresh from an old cranked ice cream maker – like the one Jowdy took from her childhood home before her parents moved. Thanks to that old cranked ice cream maker everyone can now enjoy a piece of Jowdy’s childhood. This reporter has no doubt that Zsa’s Ice Cream will continue to be a treasured family tradition. Ice cream is one of those foods that has the ability to transport us back to our childhood, whether it’s buying it off the ice cream truck or going to a “scoop shop.”

Even the company’s name, Zsa’s, is a part of Jowdy’s childhood; Zsa is a nickname that she and her sister used to call each other because they thought their own names were boring.

The best part of Zsa’s Ice Cream is that the store will be open year-round. The store is open Thursday and Friday from 3 p.m. to 9 p.m. and Saturday and Sunday from 1 p.m. to 9 p.m. Jowdy said she may be adding more hours later. She suggested people follow Zsa’s Ice Cream on social media to get updates on hours, ice cream flavors and events.

And don’t worry if you can’t get to the store. The company still sells ice cream sandwiches and ice cream in pints at local stores including Weavers Way Co-ops in Chestnut Hill, Mt. Airy and Ambler, the Night Kitchen bakery in Chestnut Hill and Whole Foods in Plymouth Meeting.

You can visit Zsa's Facebook page for more information.