GFS basketball ends year with a pair of wins

At first glance, the tail end of the basketball schedule looked like an intense stretch for the girls of Germantown Friends. As it turned out, GFS was not seriously challenged.

GFS basketball ends year with a pair of wins 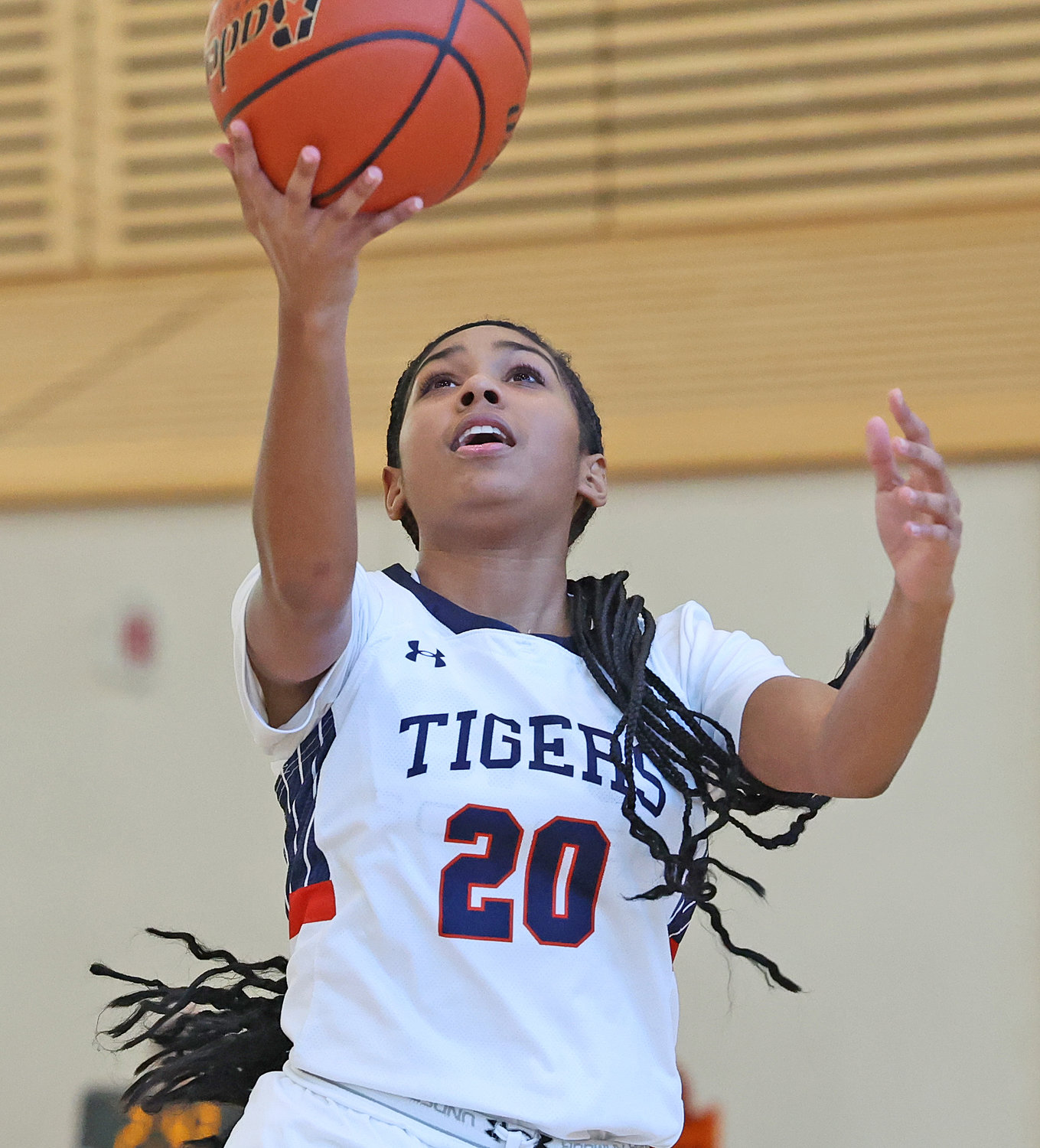 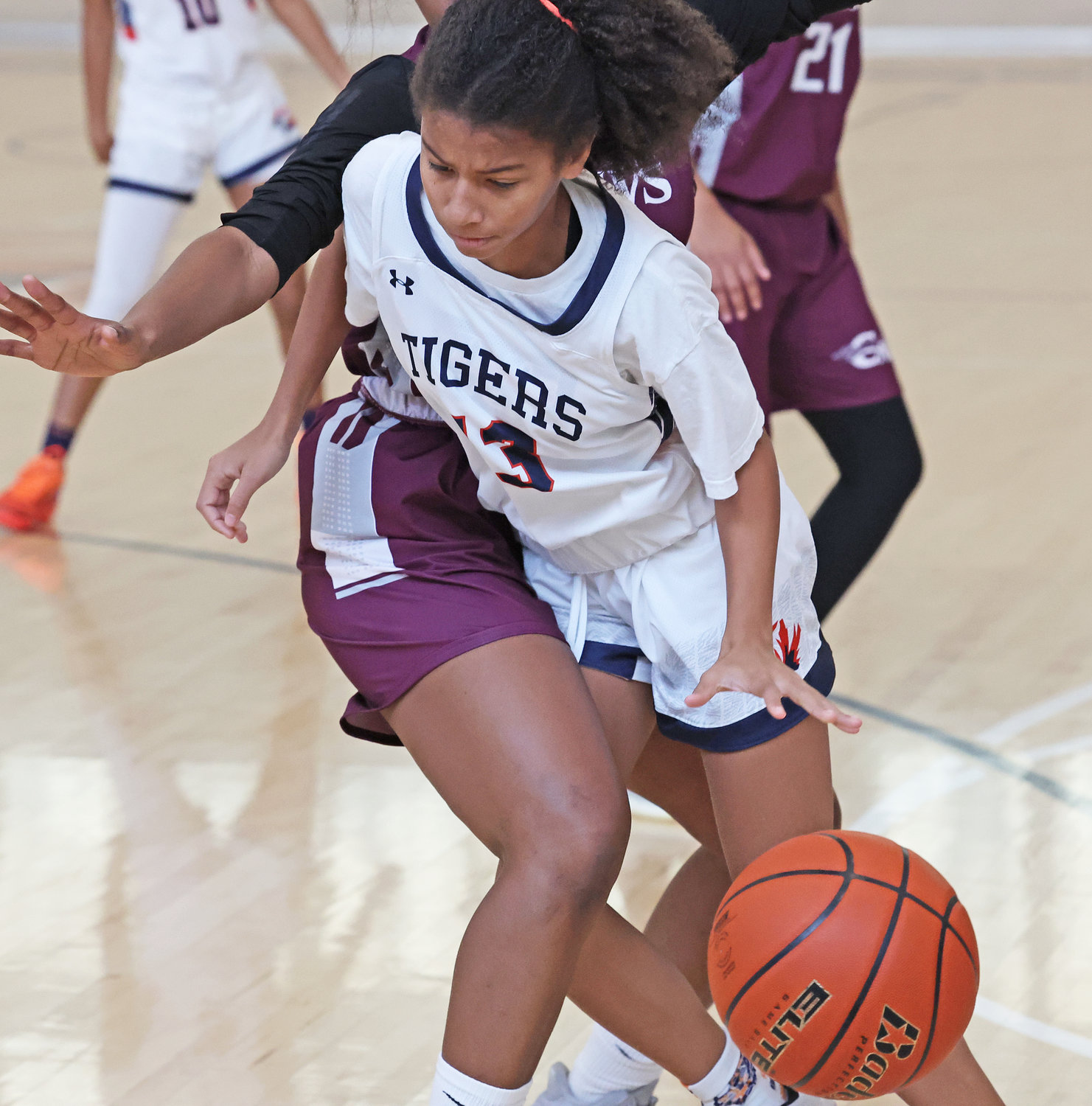 Down near the baseline, Tigers seventh-grader Johanna Lintulahti slips past a Girard defender.
Photo by Tom Utescher
Previous Next
Posted Friday, December 23, 2022 12:00 am
by Tom Utescher

At first glance, the tail end of the basketball schedule before the holiday break looked like an intense stretch of competition for the girls of Germantown Friends. The Tigers would be closing out the 2022 portion of the season with three games in three days at the end of last week.

As it turned out, GFS was not seriously challenged.

On Thursday, the Tigers rolled to a 37-17 victory over an Inter-Ac League opponent, Baldwin School. Friday's home game was called off by the visiting school, so Germantown turned its attention to another home contest, Saturday's encounter with Girard College.

The visiting Cavaliers had 10 players on their roster, but in reality injury and illness had cut the number of available athletes to just five when Girard arrived at School House Lane.

The Tigers scored the first 16 points of the afternoon and cruised to a 37-20 victory, reaching an overall record of 5-3. A well-balanced GFS offense produced six points apiece for senior Caroline Putnam and sophomores Alayah Cambell and Mia Rutledge, and five each for freshman Sarah Goldberg and seventh-grader Halle Newsome.

Germantown Friends has three seventh-graders dressing for varsity games this year, after losing a great deal of talent and experience with the Class of 2022. Both 6'2" center Clare Meyer and point guard Martina Kiewek were five-year varsity players, and forward Cadence Kelly joined them as a freshman.

As seventh-year head coach Mike Lintulahti pointed out, "They probably accounted for 80-percent of the minutes played over the last few years."

Now, he explained, "Everyone's working hard and the opportunities for production change daily. This year we need everybody to be able to step up. There's no hiding - it's all hands on deck."

"We're sharing the ball well and making the extra pass," Lintulahti said, noting that in the team's first victory, over Cristo Rey, 17 of the Tigers' 21 baskets were assisted.

Not all of the team's outings resembled the recent blow-outs. GFS lost a lead and fell to Springside Chestnut Hill Academy by a single point, then went on to close successfully in a one-point victory over Central High School in the finals of the Germantown Community Tournament.

"We play a little faster than in the past, and we're more perimeter-oriented since we don't have that dominant player inside anymore," the Tigers' mentor noted.

Last Saturday, GFS ran the floor well and scored in transition to build up a 16-0 lead over Girard by the end of the first quarter. Two minutes into the second period, the Cavaliers got on the scoreboard with two free throws by Young, but the visitors didn't score a field goal until the third quarter.

It was a game in which all of the Tigers' younger team members saw a lot of playing time. There are a total of three seventh-graders on the squad this season. In addition to the scorers mentioned above, the Tigers received four points from Taylor Linton and three from Johanna Lintulahti (both seventh-graders), and two from sophomore Katie Day.

Asked about areas where the Tigers need to improve, their coach explained, "For us it always begins with the defensive end of the floor. It's attentiveness to detail, better anticipation, and more consistent communication. We'll have some great cohesive moments, and then we'll have some lapses. Like with any young team, you want to keep improving your consistency."