‘Gods of the Upper Air:’ the story of racism’s American pseudo-science root

by Hugh Gilmore Charles King’s new book, “Gods of the Upper Air: How A Circle of Renegade Anthropologists Reinvented Race, Sex, And Gender in The Twentieth Century,” is exhilarating, …

‘Gods of the Upper Air:’ the story of racism’s American pseudo-science root 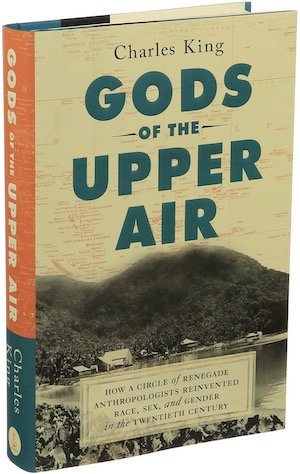 Charles King’s new book, “Gods of the Upper Air: How A Circle of Renegade Anthropologists Reinvented Race, Sex, And Gender in The Twentieth Century,” is exhilarating, fascinating, and infuriating. It convincingly tells yet another chapter in the sorry story of race prejudice and ethnocentrism in America.

This time, the focus is on the miserably biased 19th-century science that tried to justify America’s ongoing racial, sexist and ethnic hatred of nearly everyone who was not born white, Anglo-Saxon and Christian. That pseudo-science was well in place at the turn of the 20th-century. Early anthropology was an academic discipline by then and firmly entrenched in American life because it supported, encouraged, and made respectable the suppression of all those who were not of “the Great Race.”

It would probably be a surprise for most Americans to learn, from reading this book, that the German Nazi theorists of the 1930s turned for inspiration to the most successfully race-obsessed country in the world – the United States. Most of the country was segregated then by race. Mixed marriage was illegal. Male homosexuality was against the law. The Ku Klux Klan marched openly. Brownshirts filled Madison Square Garden in support of “One-hundred percent Americanism.” The country’s immigration laws were structured to minimize entry into America by southern and eastern European people. The Chinese Exclusion act denied entry to an entire nation.

King relates, in a chapter called “War and Nonsense,” how Germany’s Nuremberg Laws of 1935 relied on careful study of the “U.S. Model,” as the Nazi theorists called it. (See, for example, “Hitler's American Model : The United States and the Making of Nazi Race Law,” by James Q, Whitman. Princeton University Press, 2017.) In fact, Heinrich Krieger, one of the major shapers of Nazi policy, “gained expertise in American race law as an exchange student at the University of Arkansas.”

And all the nonsense they spewed was bolstered by the very willing and very prejudiced social scientists that dominated American thought from the Civil War till the 1940s. The prevailing theory of the day was that all human progress moves through three stages: savagery, barbarism and civilization. White western European people occupied the top rungs and believed it would be horrible, criminal, to dilute their pure blood. Civilization itself was at stake. Intelligence, they said, as well as grace, beauty, finesse and morals, all correlated with white skin and “Nordic” brains.

As is obvious in America today, those prejudiced and erroneous strains of thought still persist. In modern academia, they are considered fringe theories, but political finesse, gerrymandering and social media massaging have made it clear that what is known in the Halls of Science does not guide policy making in the Halls of Congress.

Such was the social and intellectual milieu of American racial, ethnic, gender and sexual understandings before Franz Boas immigrated to America from Germany. He came to stay at the turn of the 19th Century and, by virtue of his training as a physical scientist, brought scientific rigor to the study of human nature. To the basic question of nature vs. nurture, he also brought calipers, scales, spectrometers, questionnaires and observation. He amassed data on every aspect of human life. Data, he believed, was supposed to generate theories of human nature, not be used selectively to support hatred and fear.

Boas founded the Department of Anthropology at Columbia University and trained generations of students, many of whom would go on to found their own departments in America. Among his many famous students were Margaret Mead, Ruth Benedict, Zora Neale Hurston and Ella Cara Deloria. Their personal and professional biographies are interlaced throughout this book and give it a zest that invigorates King’s depiction of how anthropologists, especially this “renegade circle” made the modern world more just, sympathetic, and tolerant, than the one that preceded it.

It’s impossible to read this book, however, without wondering why the same battles are still being fought today.

Hugh Gilmore is a former anthropologist who specialized in the evolution of human behavior and did field studies of primates in the Caribbean and East Africa. He lives and writes now in Chestnut Hill.