What's a parent to do when a child's odd behavior escalates far enough, frequently enough, that it can't be shrugged off as just an eccentric personality? And what if the problem is magnified by six? 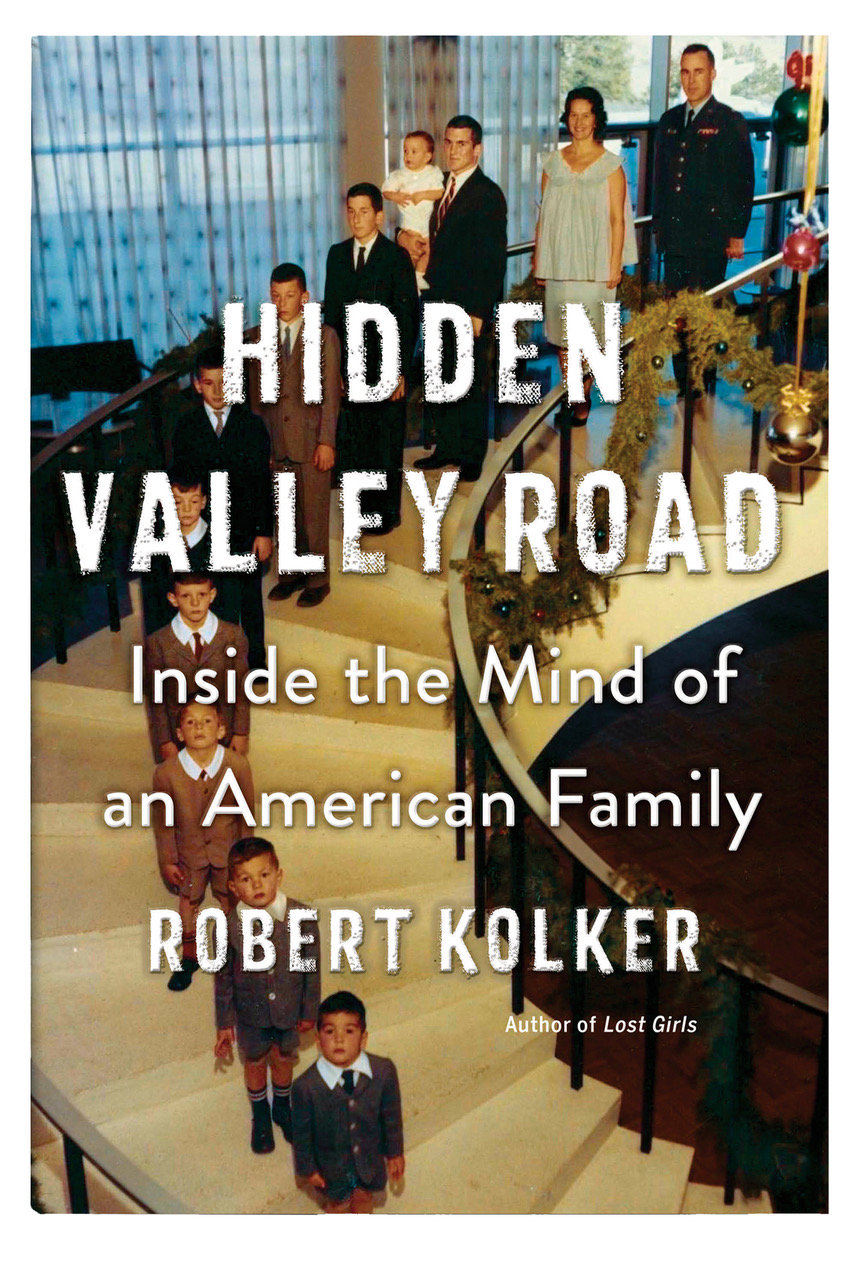 Robert Kolker's medical-mystery bestseller, "Hidden Valley Road: Inside the Mind of an American Family," is a tale of a family struggling with mental illness and the evolution of the science to diagnose and treat it.
Posted Wednesday, February 24, 2021 10:30 am
by Hugh Gilmore

In 1944 an energetic, dynamic, good-looking couple of Coloradans, Mimi Blayney and WWII combat vet Don Galvin, married and started a family. They had 10 boys in a row and then two girls. Most of their offspring were athletic, smart, artistic or musical. Dad was in the Air Force and helped launch its newly established academy in Colorado Springs. Mom was a super housekeeper, organizer and arts maven. Hiking, camping, guitar-playing, football, ice hockey, dance recitals, training falcons as Air Force mascots, lots of food, lots of laughs – the All-American family it would seem.

Except, by the time the two girls were still children, six out of the 10 boys were behaving terribly. One by one, starting with Donald the oldest, they began drinking alcohol, doing drugs, dropping out of school, obsessing, fighting one another (literally, in the house, terrible fights), becoming delusional, hearing voices, hallucinating, getting locked up, ranting and generally making themselves intolerable to be around. Not all of these traits appeared at once in the same person. But collectively, their combined weight frightened and burdened their siblings. Nearly every family gathering was tainted by disturbances.

What's a parent to do when a child's odd behavior escalates far enough, frequently enough, that it can't be shrugged off as just an eccentric personality? When teachers keep asking for behavioral conferences? When the police come around – sometimes at your request? And what if the problem is magnified by six?

In terms of seeking help, the Galvins' position in the evolving science and art of psychiatry was unfortunate. The 1950s were a tidal peak for the kind of Freudian explanation that blamed mental illness on "cold" – "frigid" even – mothers and withdrawn fathers. By the 60s, as a side branch of that kind of thinking, ludicrous as that sounds today, a number of then-credible voices in the psychiatry world, like R. D. Laing and, more famously, Thomas Szaz, were proclaiming that insanity – so-called insanity – was not real. Schizophrenia, they argued, was a sane reaction to a world gone mad. And, as the 1960s progressed, so did the theory that the insane, the possessed, were actually spiritually gifted people. They had messages for us, from the ancients, and for the future. Where could the Galvins turn, especially since they did not want it widely acknowledged that their ideal American family life was so chaotic?

What was available in the 1960s to their son Donald, the first of the Galvin children to go off the social rails? Well, there was talk therapy, and/or religious consultation, mood-altering drugs (starting with Thorazine, the grandfather of all neuroleptic drugs), icy baths, electro-convulsive therapy, lobotomies, jail, private and state mental hospitals, and on-and-off visits back home for indeterminate stays. And, as Donald went, so did five more of the 10 Galvin boys. But all 12 children had to live with the fear that anytime they did something a bit strange, or different, it might be the first sign of their own burgeoning schizophrenia.

This book compassionately tells the stories of those children as they grow into adults.  Special attention is given to the two girls, Margaret and Mary (who renamed herself Lindsay), first-born Donald, second-born James, Peter the musician, and Brian. But all are followed through childhood up to the writing of this book. Some of them are in their 70s by now. Their stories, together with those of their parents, especially their mother, are amazing, touching, frightening, and moving. But there's more.

Interwoven with the family's travails is a brilliant narrative of the rise of the scientific study of mental illness, especially schizophrenia. The rise of biogenetics and brain physiology and biochemistry gradually changed the way that mental illness is understood. Kolker traces, as though this is a medical detection story, the work of a few (of many) determined scientists who care. They made their breakthroughs despite the indifference of science foundations, politicians, traditional psychotherapists, the profit-centered pharmaceutical industry, and the cloistered way in which some branches of science refuse to cooperate with others. In the case of Dr. Lynn DeLise, now at Harvard, there was the added burden of being a female scientist in a male-dominated world.

This book frightens while it fascinates. It reads like a great, sweeping family saga. And that saga stands as an example of one suffering family's struggle to understand the mysteries of the human brain. There is probably not a reader of this newspaper who has not experienced how mental problems affect families. "Hidden Valley Road" is a modern exploration of the Nature/Nurture question that has bedeviled human understanding for centuries.

Hugh Gilmore is the author of the affecting memoir "My Three Suicides: A Success Story."