Saturday, July 24, started out as just another day in the park for Chestnut Hill resident Anthony Stover. As he did every Saturday at 8 a.m., he brought Biscuit, his 7-month-old mini–Australian Shepherd, to Pastorius Park. Biscuit was playing with about six other dogs when he suddenly started to squeal. 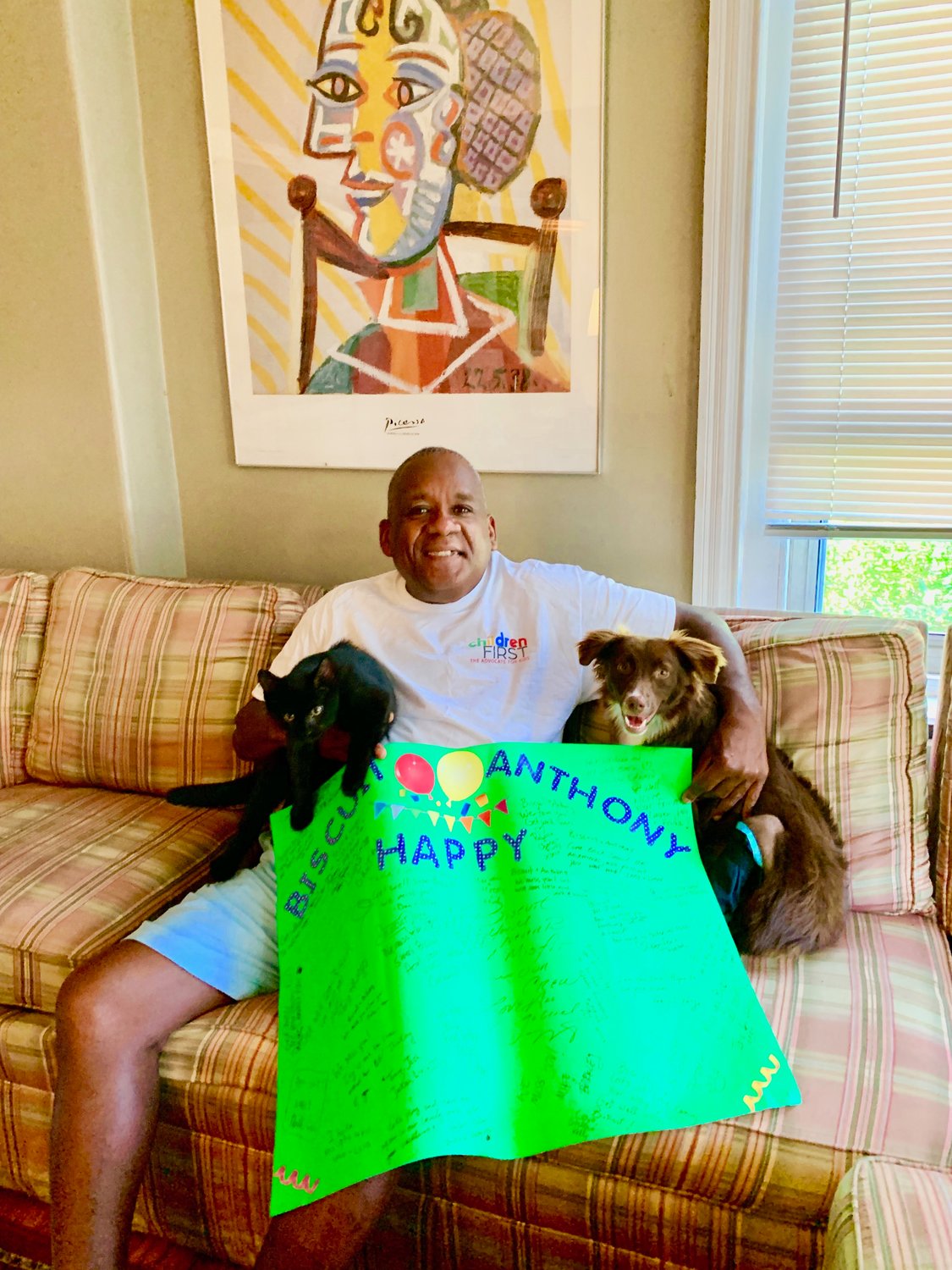 Citizen Canine is a column that will honor a local dog in each article. If you know of a dog we should spotlight, contact ctzncanine@gmail.com.

Saturday, July 24, started out as just another day in the park for Chestnut Hill resident Anthony Stover. As he did every Saturday at 8 a.m., he brought Biscuit, his 7-month-old mini–Australian Shepherd, to Pastorius Park. Biscuit was playing with about six other dogs when he suddenly started to squeal.

“I ran over with all of this adrenaline and passed everyone,” said Anthony, 60,  “and when I got there, I see Biscuit’s leg is twisted like a pretzel. So I picked him up, and he bit me on the neck because he was so panicked.”

“It was a series of screams, obviously screams of pain,” said Daphne Baxter, owner of a Labradoodle named Joey.

Anthony took Biscuit to three different vets. With the help of Roger Baxter (Daphne’s husband), he took Biscuit to Montgomery Animal Hospital in Flourtown. There the vet told Anthony that Biscuit needed emergency treatment, which Montgomery Animal Hospital does not provide. Then Anthony and Roger rushed Biscuit to BluePearl Vet Hospital (formerly PVEC) in Conshohocken.  “They said he had a broken leg, and they put a splint and cast on it,” Anthony explained.

The vet said that Biscuit needed an operation to ensure that the bone would heal properly. However, she would not be able to operate until two days later, the following Monday, July 26.  Anthony didn’t want to wait that long, so he and Roger tried their luck at Penn Vet, but at Penn it would be a five-day wait before Biscuit could be operated on. Anthony took Biscuit back to BluePearl, and that Monday they operated on him. The vet was pleased with the result. Biscuit is going to be fine. Anthony did not have pet insurance. The cost of the operation was $5,800, and the first vet appointment was $150.

Meanwhile at the park, the other dog owners were concerned. “For the next few days, we came here, and everyone was just talking about it,” said Daphne.  “Neighbors wanted to know what the screams were from. Everyone asked, ‘How’s Anthony? How’s Biscuit?’”

People were more than concerned. Some visited Anthony during the next week and brought dog treats. Others wanted to help pay for the medical costs. The night of the operation Amber Lin and Lishan Feng, owners of a Border Collie named Fritz and a Red Fox Labrador named Sally, began to collect contributions. Amber said that she “started with a group text to ten people,” and asked them to spread the word. “The money started coming in a few minutes after I texted,” she said.

Amber collected funds through Venmo and set up both a PayPal account and a Go Fund Me campaign. She and Lishan also collected cash at the park. Amber asked that contributions come in by Friday, July 30, six days after the accident and four days after the operation.

The following Sunday morning Roger Baxter and Lishan Feng went to Anthony’s house and gave him a poster with over 30 well wishes. “I was overwhelmed,” recalled Anthony, “and then they gave me an envelope that had $2,660 in cash.”

There were 27 contributions that added up to $2,660, and Anthony is feeling extremely grateful to both the owners and dogs of Pastorius Park. "What dogs do for us in regard to building community is amazing. We hear so much bad stuff [in the news]. And this is something everybody needs to hear: [about] the beauty of human beings and the connection of dogs that nurture our relationships."

For the past 22 years, Anthony has been the Communications Director of the Philadelphia Ronald McDonald House. He is also a member of the School Committee at Germantown Friends School and on the Board of Directors for Frankie’s World, a nonprofit for children with medical needs. His 26-year-old daughter, Taylor, lives in Port Richmond.

Anthony adopted Biscuit from the Pennsylvania SPCA in April of this year. Six weeks later, he adopted a kitten from Philly PAWS to keep Biscuit company. He named the kitten Gravy. Biscuit and Gravy get along well. “They play rough, but with a lot of love,” explained Anthony. When Biscuit came home from his operation, however, Gravy was gentle with him.

Anthony expects that he and Biscuit will be back in the park again by the end of September. What happened was “horrible,” said Roger Baxter, “but it brought people together a little more. We were already a pretty friendly community around the park, but it made the community even tighter.”