George Drakopoulos is clearly the straw that stirs the drink at Malelani Café in Mt. Airy. (Photo by Len Lear) by Len Lear Greek people have a reputation for extreme hospitality and great food, … 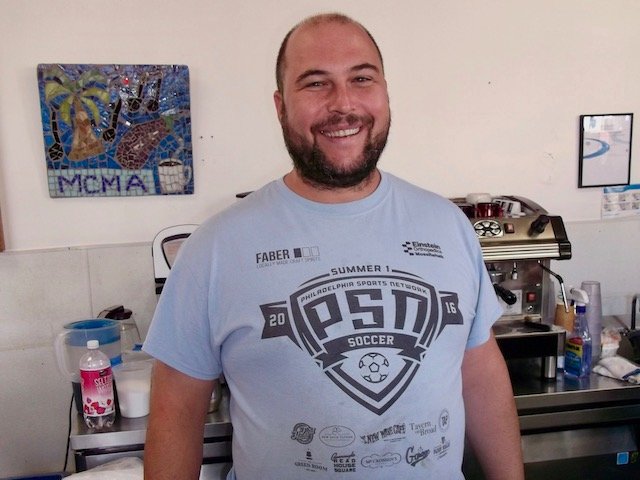 George Drakopoulos is clearly the straw that stirs the drink at Malelani Café in Mt. Airy. (Photo by Len Lear)

Greek people have a reputation for extreme hospitality and great food, which we can confirm based on our own experiences in Greece as well as at Malelani Café, which celebrated five years in business on Sept. 5 at 6734 Germantown Ave. in West Mt. Airy.

Open seven days a week for lunch and dinner and in-between, Malelani is a BYOB that serves fresh, healthy, very reasonably priced Mediterranean and American cuisine, coffee and espresso and high-end teas in a casual environment of smiles from staff members who are glad to see you. “Malelani” is a South African word that means “the place of palms.”

Although owner George Drakopoulos, 38, is of Greek descent, why the South African restaurant name? It’s because he was born in Johannesburg, South Africa, and emigrated to the U.S. with his family in 1996. His mother, Cecilia, is a nurse, and his father, Dimitri, was a bookie in South Africa, taking bets on horses. (Betting is legal in South Africa, and bookies are licensed, although Drakopoulos admits that his dad “was an illegal bookie because he not want to pay for the license. He did have some trouble with the law, but the cops there have a lot bigger issues to deal with.”) 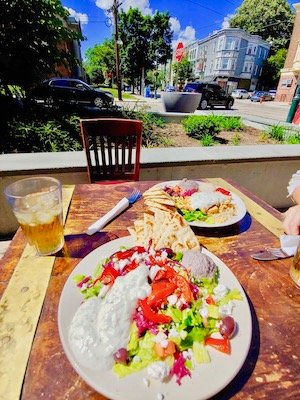 In addition to the 35 seats indoors, Malelani Café has an outdoor patio that seats 20, weather permitting. (Photo by Leslie Cerf)

According to Drakopoulos, who is basically a big can of Red Bull with an infectious laugh, his parents brought him and his sister, Maxi, to the U.S. because “although there is crime here in Philly, it is nothing like Johannesburg. It is like the wild west there; crime is just terrible! And we knew there was a shortage of nurses here, so my mom would be able to get a job.”

Because his father couldn’t continue his profession in this country, he started working for Drakopoulos’s godfather, who owned a restaurant on the boardwalk in Atlantic City. Dimitri eventually opened his own restaurant, where Drakopoulos got a lot of practical business experience at a young age.

After he graduated from Stockton University in South Jersey with a degree in business and hospitality, Drakopoulos went back to South Africa for five months and worked in a couple of cafés. “When I came back, I had the idea to open a café myself. I bought an espresso machine, and it sat on my table for about two and a half years before we found a small breakfast place (the original Malelani Café) in Ventnor City in 2008.”

The Ventnor eatery closed three years ago, but Drakopoulos and his dad have another place, the Longport Seaview Café, which opened four years ago and is still open in Longport, but during the summer only.

Most of the food, but not all, at Malelani Café is vegetarian and vegan. “I have an almost greaseless kitchen because of it,” Drakopoulos said. “The worst part of this business is cleaning up all the grease that comes from cooking meat, and I do not have to do it.”

Drakopoulos is also committed to promoting artists and musicians. Malelani features ongoing exhibits by local artists, an open mic night for musicians, poets and other performers, all of whom are local, every Thursday beginning at 7 p.m., and frequent concerts, as well as comedy nights on certain Wednesdays. The artist whose 12 stunning portraits are currently beautifying one wall is Angelique Benrahou, 28, a lifelong Mr. Airy resident and former Chestnut Hill College student who now studies art at Studio Incamminati near Center City. 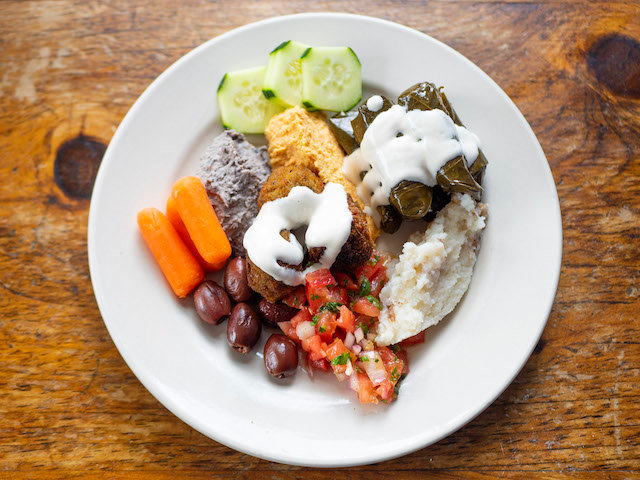 Malelani Café has been getting virtually unanimous rave reviews on Yelp. The dish seen here has falafel, carrots, olives, dolma (stuffed grape leaves) and much more. (Photo by Darius Elliott)

“Thursdays are our busiest nights,” Drakopoulos said. “It costs money to pay musicians, of course, but it brings in more business than it costs. Since they are all local, they bring in their own friends, who tell other people, and it works out great. We are doing three times more business this year than we did last year. Several websites have really helped like Grubhub, Nextdoor, Uber Eats and Mt. Airy USA.”

Drakopoulos, who lives across the street from Cliveden Park, insists that “Mt. Airy picked me. I catered the Battle of Germantown on Oct. 6. My father actually said to me, ‘Do you know that we lost [to the British in the battle]?’ I’m doing a lot of other catering, like at the Lutheran Church on Stenton Avenue and a wedding this Saturday for 61 people.”

The food at Malelani Café is crazy good, like the gyro, the shawarma and the veggie pita. The prices are from another era. Huge dinner platters, for example, are all in the $15 range. Although the weather is not exactly cooperating anymore, there is an outdoor area that seats 20 in addition to the 35 seats indoors.

For more information, visit the cafe's website or call 267-766-2396. Len Lear can be reached at lenlear@chestnuthilllocal.com. Carole Verona also contributed to this article.