For much of the city, last week’s shooting at Roxborough High School was an astonishing episode of violence in an area many Philadelphians believe to be a safe neighborhood. 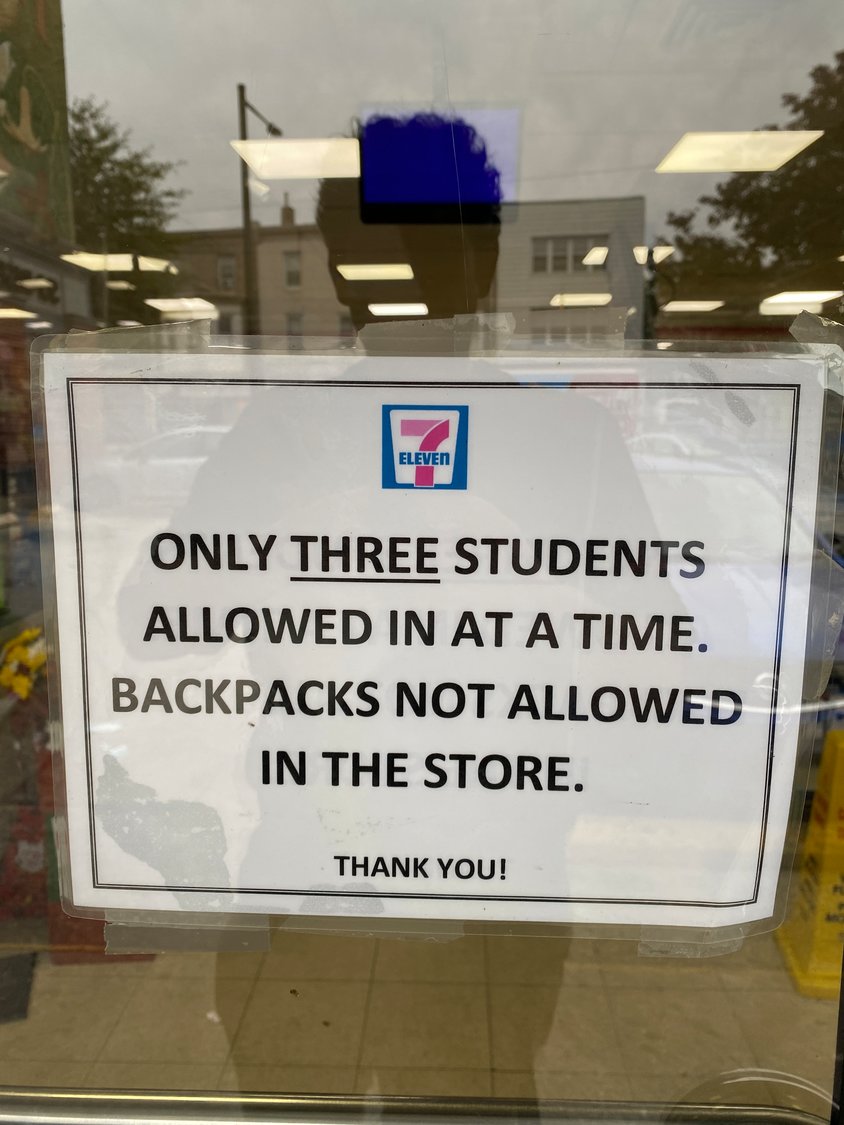 A few weeks ago, Sangeen Khan, owner of the Roxborough 7 Eleven, put this sign on his door.
Photo by Tom Beck 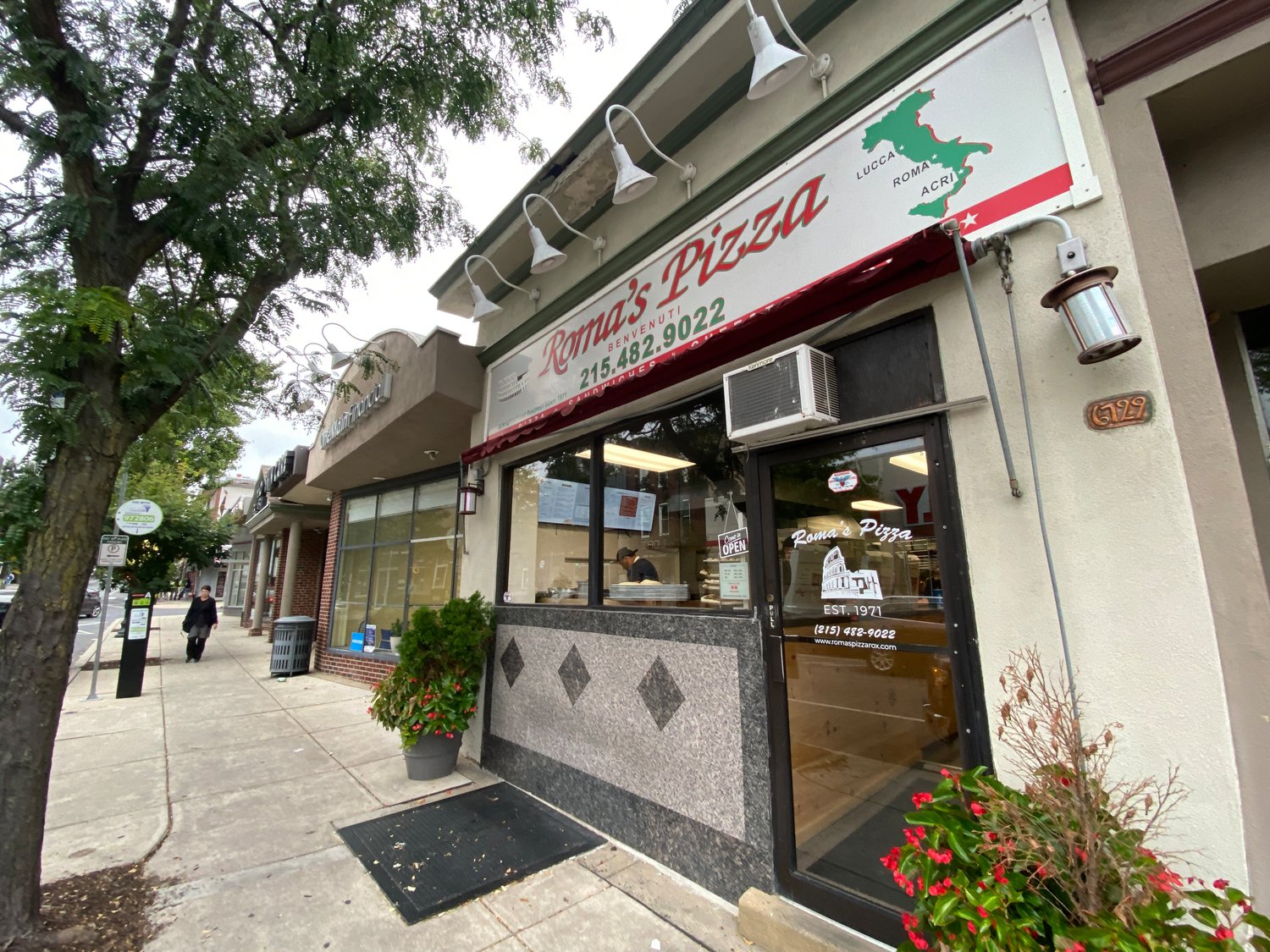 Michael Carr, owner of Roma’s Pizza in Roxborough, started closing his store from 2:45-3:45 p.m. during the week in an effort to keep out misbehaving Roxborough High School students.
Photo by Tom Beck
Previous Next
Posted Wednesday, October 5, 2022 12:00 am
by Tom Beck

For much of the city, last week’s shooting at Roxborough High School was an astonishing episode of violence in an area many Philadelphians believe to be a safe neighborhood. The shooting killed 14-year-old Nicholas Elizalde, a W. B. Saul High School student who played football with Roxborough High, and four of his teammates were injured in the attack, for which police believe a player from Roxborough was the target.

Students from two other Philadelphia high schools – Northeast High School and Boys Latin Charter School – were also victims, struck by bullets after a football scrimmage on Roxborough’s football field that afternoon. As of press time on Tuesday, police had not yet identified the shooter, although they found the stolen SUV that the assailant was driving in South Philadelphia.

As the city mourns the loss of yet another young life to a shocking incident of gun violence, friends and peers of the slain student are grappling with their loss. Residents and business owners say they share that sense of sadness. They are also concerned by what they describe as some disturbing trends.

In a number of interviews last week, more than a few business owners told the Local that student behavior, a growing problem, has become so bad that some along the Ridge Avenue corridor said they’ve started closing for the hour after school is dismissed.

“Kids are just misbehaving. They’re threatening the employees here and at other small businesses,” said Kaitlyn McKeon, an employee at Roma’s Pizza. The restaurant now closes weekdays from 2:45 to 3:45 p.m., a practice that began on Monday of last week – the day before the shooting. “People keep thinking we’re closing in the middle of the day because of the shooting, but we’re not. It started before.”

Michael Carr, the owner and manager of Roma’s, said it was a decision he made to keep his employees and customers safe. “That’s all I really care about,” he said.

Celeste Hardester, board chair of the Central Roxborough Civic Association, said complaints about unruly student behavior, which have come up periodically at neighborhood Zoom meetings, are definitely on the rise since schools reopened after COVID lockdowns.

“It’s something that I hear about more and more,” she said, adding that she can't say for sure whether COVID has anything to do with it.

Roxborough is not the only school grappling with worries about violence. A Plymouth Whitemarsh High School game against Cheltenham High School was called off on Friday after the Colonial School District got an anonymous tip about potential violence, and that same night John Bartram High School in Southwest Philadelphia called off a varsity game with Imhotep Institute Charter High School.

Reports of unruly teen behavior have surfaced across the city in the months since COVID forced school shutdowns, keeping students out of their classrooms for more than a year. Just two weeks ago, a video showing about 100 teens ransacking a Wawa on Roosevelt Boulevard in Northeast Philadelphia went viral.

But Roxborough businesses are rattled. Nearly every business owner or manager the Local interviewed complained about the unruly behavior of some students.

On the southern end of Roxborough’s business corridor at the corner of Ridge Avenue and Conarroe Street, Sangeen Khan, who said theft happens every day, put a sign on the front door of the 7 Eleven several weeks ago:

“ONLY THREE STUDENTS ALLOWED IN AT A TIME. BACKPACKS NOT ALLOWED IN STORE.”

“They grab everything, stealing,” Khan said.“They don’t care and they run around the store like they’re playing.”

Khan has owned the store for 14 years, and said he’s never seen anything like it.

Several residents told the Local that the Wawa near the intersection of Ridge Avenue and Cinnaminson Street on the northern end of Roxborough’s business corridor had also been closing, although the store’s managers said they could not speak with the media.

Paul Papageorgiou, a manager at Zesto Pizza & Grill on Ridge Avenue and Martin Street, said it used to be worse – students fighting and throwing potato chips around the store.

But he still has problems.

An assistant manager at the Roxborough Family Dollar who gave her name only as Debbie B. said the majority of students are respectful, but there are bad apples who cause problems – and her store gets hit with a lot of shoplifting. Comforters and laundry detergent are particularly popular items.

“The students come in here, like, ten deep,” she said. “I know all the neighborhood thieves.”

Currently, she has a sign hanging on the front door of the Family Dollar that is offering a reward and a picture of someone believed to be a repeat shoplifter and a Roxborough High student.

The owner of Lennie’s Hoagies, located near the corner of Ridge Avenue and Dupont Street, said he’d like to see an increased police presence along the corridor in the hours after school is dismissed.

“They need to space out the paddy wagons along Ridge Avenue and hire more security during that time,” said Lennie, who declined to give his last name.

Meanwhile, this particular death continues to reverberate across a city that, with more than 400 murders so far this year, is no stranger to gun violence.

Hundreds of neighbors joined a prayer vigil in Gorgas Park on Thursday night for Elizalde, mothers gathered in front of the school Friday morning to watch over students arriving for classes and Philadelphia Eagles head coach Nick Sirianni wore a Roxborough High School jersey during his post-game press conference on Sunday to express his support.

In a statement, School District of Philadelphia Superintendent Dr. Tony B. Watlington Sr. said he was “heartbroken and angered” by the shooting.

“The ongoing gun violence in our city is absolutely unacceptable,” he said. “We remain firmly committed to working with the Philadelphia Police Department and the City of Philadelphia to see how — together — we can better address the gun violence that is affecting our students and communities throughout the city.”