Some previously existing summer basketball leagues for scholastic players did not survive the COVID-19 pandemic, but a new one for high school girls was launched last week at Germantown … 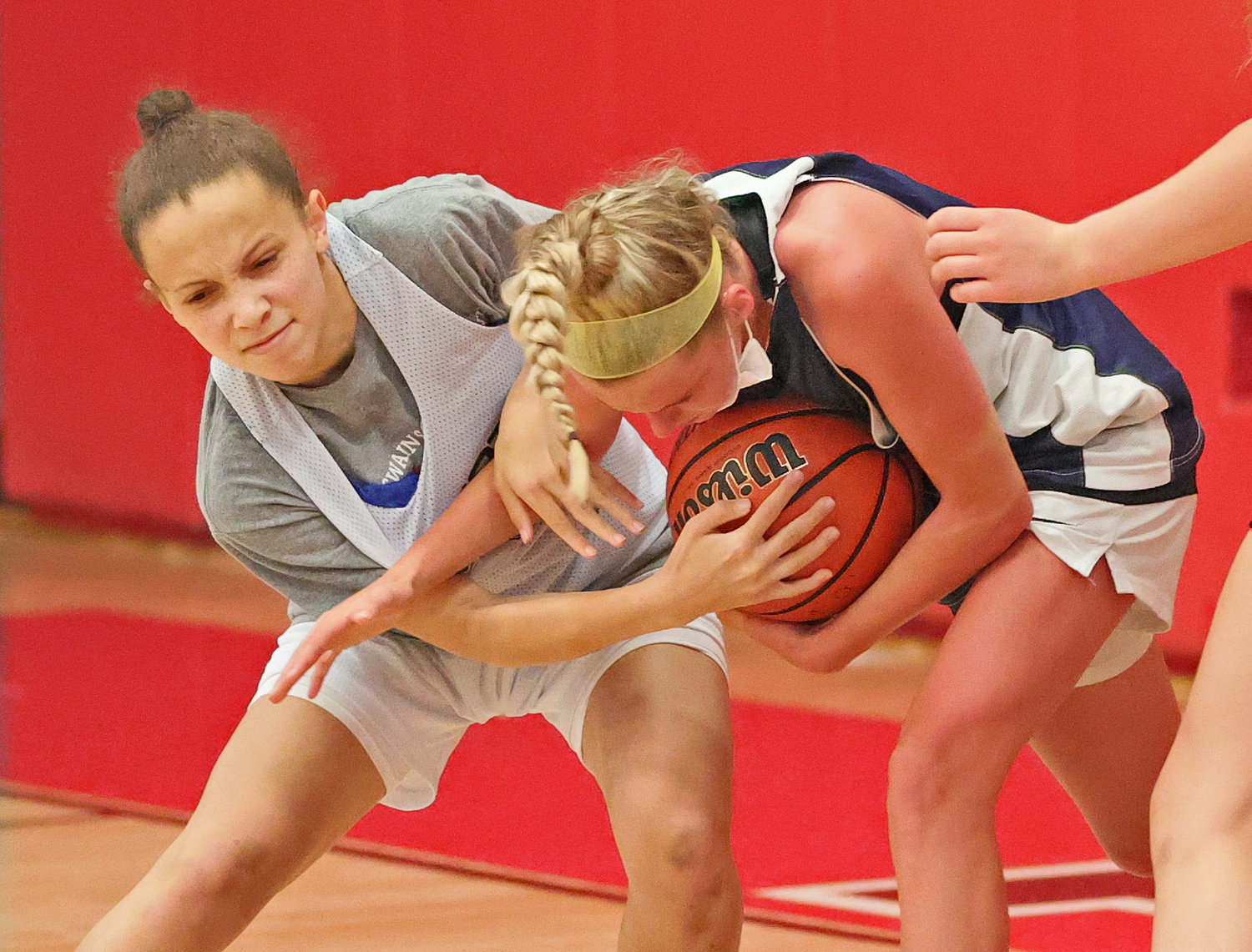 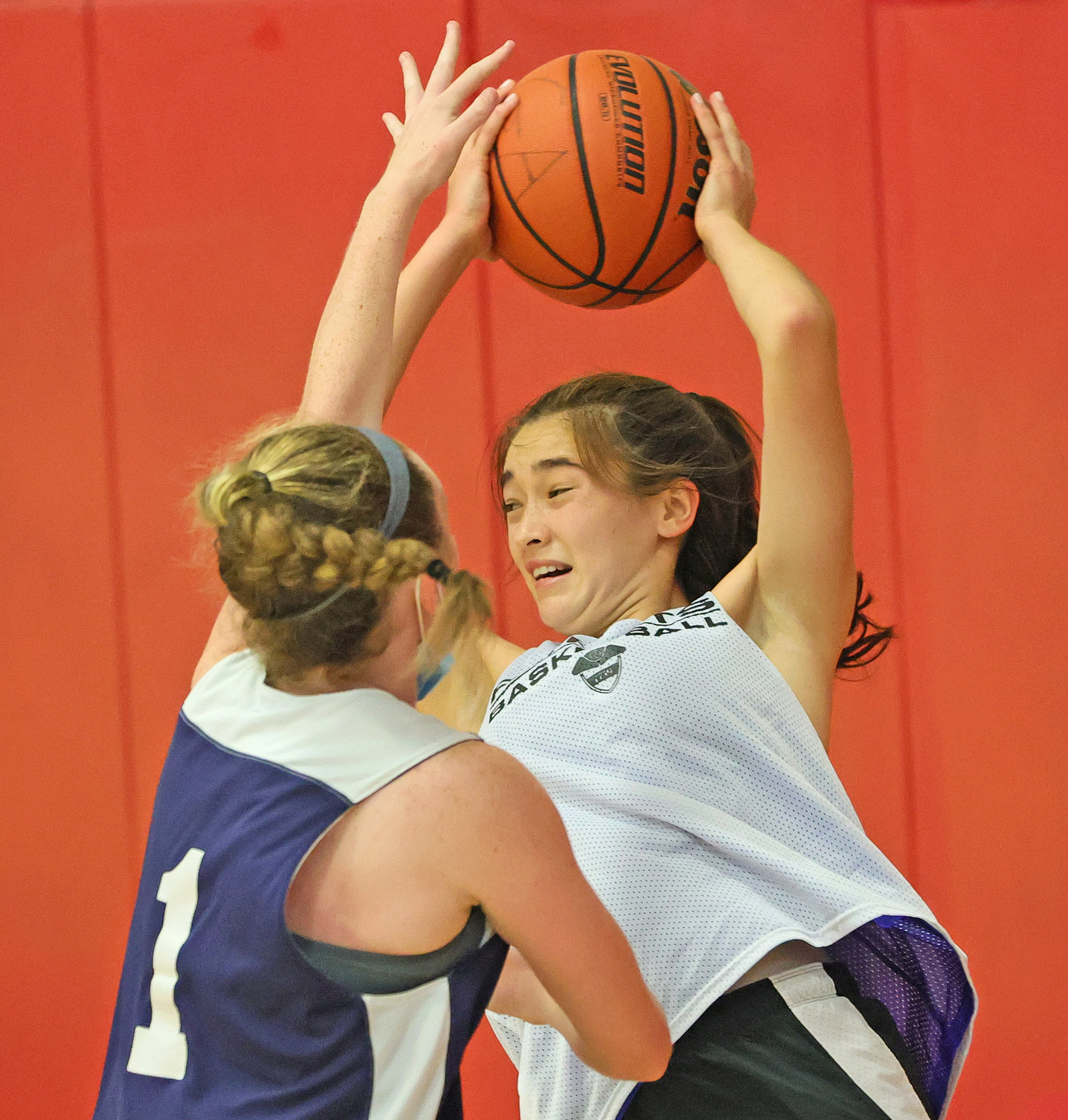 Alex Goodridge (right) a rising senior at GA, is pressured along the baseline.  (Photo by Tom Utescher)
Previous Next
Posted Thursday, July 1, 2021 9:17 am
by Tom Utescher

Some previously existing summer basketball leagues for scholastic players did not survive the COVID-19 pandemic, but a new one for high school girls was launched last week at Germantown Academy. One of the organizers is longtime GA head coach Sherri Retif, and her school is one of two sites where games are being played.

GA is the only Inter-Ac League school participating, but there are many teams from the Suburban One League, along with representatives from the Philadelphia Catholic League and the Athletic Association of Catholic Academies (not Mount St. Joseph, however).

The program at GA on Tuesday evenings will feature two different visiting teams each week, and in a three-game session each school will play the other two. While every team was missing at least a few players due to various summer conflicts, the Patriots assembled a group that proved strong enough to overcome rivals from Council Rock South High School and Bensalem High School as the league opened up last week.

Guard Alex Goodridge was the only one of Germantown's three rising seniors who was on hand for the start of summer competition on Tuesday. The other 2022 class members are guards Lilly Funk and Bri O'Hara.

A lot of the Patriots' size is found in the junior class. Kendall Bennett, at 6'2", has played on the varsity team since she was a freshman, and 5'11" Josie Munson, a Colorado native, transferred in last year.

GA had a large group of talented freshmen last season, although not all were immediately available for duty last week. Basha Harrington and Jenna Aponik were working through injuries, but Aponik's twin, Jessica, was out on the court, as was guard Sam Wade. Another guard, Isabella Casey, was also part of 2020-21's strong ninth-grade class.

Three new players were performing with the varsity veterans in last week's summer debut. Abigail Marino, a guard, is a rising junior who played on the Patriots' JV team last season. Forward C.J. Thomas is moving into the high school ranks from GA's own middle school, and guard Jessica Kolecki is a new student at the school entering the freshman class.

Gabby Bowes, a rising ninth-grader who has been at Germantown Academy, will join this group.

Against the first of GA's opponents last Tuesday, Council Rock South, Bennett and Munson formed the backbone of the Patriots' offense as they came back from an early 2-6 shortfall to lead 17-12 at the half. Aponik came on strong in the second half as Germantown pulled away to a 39-28 victory.

On defense, the Pats could've shown more awareness of their opponents' strengths. After watching the Hawks take a number of outside shots and net a pair of three-point field goals in the first half, GA let CR South make four treys more in the second period. In all, they accounted for 18 of the team's 28 total points.

After the Pats slipped behind, 6-7, early in their second game against Bensalem High, their youngest players helped turn things around. Thomas converted a traditional three-point play (field goal and foul shot) and then Kolecki scored on a breakaway and went three-for-four at the foul line in the middle of the period.

Late in the half, the league hosts were ahead 19-14 when they began a 6-0 finishing run with a bucket off a rebound by Bennett. Then it was Jessica-to-Jessica as Aponik passed the ball ahead to Kolecki for a transition lay-up. After Munson made a pair of free throws, the Patriots enjoyed a 25-14 advantage at the intermission.

The young Thomas used her size and strength inside to help drive the GA offense in the second half. A bit of three-point shooting aided Bensalem on offense, but the Patriots still won comfortably, 46-30.