Hill animator shows how it's done in MALT classes 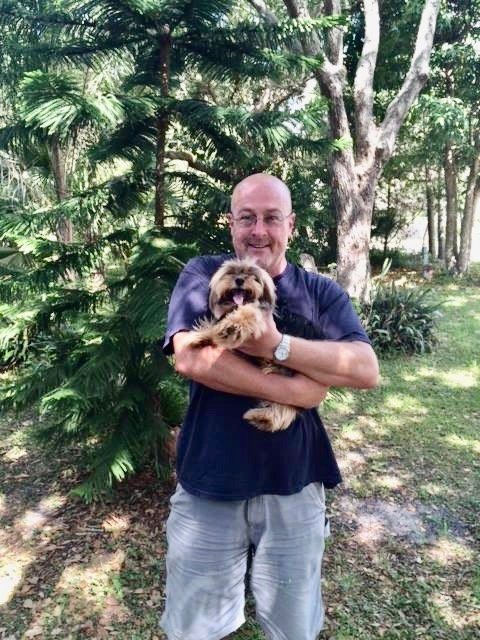 Chestnut Hill film animator John Serpentelli, director of 100 short films for networks including Nickelodeon and HBO, is seen here with his sister's dog, Boo, named for a legendary character in “To Kill A Mockingbird.”
Posted Thursday, March 3, 2022 12:00 am
by Len Lear

John Serpentelli, a Chestnut Hill resident for 25 years who has created numerous animated films for HBO, Nickelodeon Jr., Sesame Street and PBS, among others, will be teaching three Mt. Airy Learning Tree classes in “Mighty Mash-Up Collage” this month.

Serpentelli has directed more than 100 films, some of which have been featured at festivals from New York to Tokyo and have been favorably reviewed in The New York Times and Variety magazine. Throughout his long career, Serpentelli has taught and given lectures on the subject at Drexel University, Amherst College, the University of Pennsylvania, and the Philadelphia Museum of Art as well as other art centers and schools. His independent films have won awards from The American Motion Picture Society, UNICA Festival in Warsaw, Poland, and the New York Expo of Short Films.

According to Serpentelli, his classes “take a free-wheeling, surprise attack approach to making collages. No delicate dream boards here. The intention is to discover visual connections, create meaning out of clashing images and to illustrate life in all its chaotic glory.”

Serpentelli, who was raised in Toms River, N.J., first came to Philadelphia after high school in 1983 to attend the Pennsylvania Academy of the Fine Arts. He stayed for three years, then transferred to the University of Pennsylvania, where he studied film and art history and developed a passion for animation. His Penn education introduced him to various disciplines of fine arts. Woodblock printing stood out to him, but "I realized I was 200 years too late for that," he said.

Still, he figured animation and woodblock printing shared similar techniques. Each woodblock print in an edition of maybe 20 had to be the same, but Serpentelli's attempts at prints varied. Each one had a small difference. He realized it was much like creating an animated scene, where to make a character wave, an animator might have to draw a dozen almost identical images. That's when he first started to dive into animation.

Serpentelli completed his studies at Penn in 1988 and went on to graduate school at the University of the Arts, where he became an adjunct professor. He earned his bachelor's degree in fine arts, in art and film, in 1991, followed by a master's degree in art education in 1993. He has been teaching art and animation ever since.

In 1997, Serpentelli quit his day job as a middle school teacher after a Sesame Street producer viewed one of his films at a New York City festival.

But he didn’t stop teaching altogether. He took a job at the Allegheny School for Girls in North Philadelphia, a school that catered to young girls who had committed weapons offenses. He taught a class in collage art making.

“It was a life-changing experience,” he said. “At that point I had never taught before and had no idea what I was doing. The girls were so welcoming and appreciative to have their voices heard. It was a truly beautiful experience.”

That experience informed his first film, 'Some Girls in the Hood.'”

“That was my first, and it’s also my favorite,” he said.

One of Serpentelli's most powerful  films, "Animating Autism," won Best Documentary at the 2011 Greater Lehigh Valley Filmmaker Festival. The film depicts a group of autistic children as they learn how to animate. Before that, Serpentelli had worked with blind children and those who have conditions including Down syndrome.

Currently, Serpentelli is working with a project called Artists in the Classroom. “I have become a digital dinosaur,” he said, “so hands-on creativity is my game, and history is on my side.”

When asked about his 25-year history of living in Chestnut Hill, Serpentelli said, “My only complaint is the Pickleballers right outside my bedroom window.”

When asked what was the best advice he ever received, Serpentelli replied, “It was to 'just show up.' If you have a passion and a vision, then someone somewhere will hear you. Art is all about communication - to yourself and to someone who thinks and feels as you do.”

For more information, visit serpentelli.com. Len Lear can be reached at lenlear@chestnuthilllocal.com