When I first saw Janet Gilmore's new book, “She's your Sister and You Love Her, Right,” I thought it would be one of those light-hearted, quick-read pocket-sized birthday gift books that are ubiquitous in gift shops and tourist destination stores. 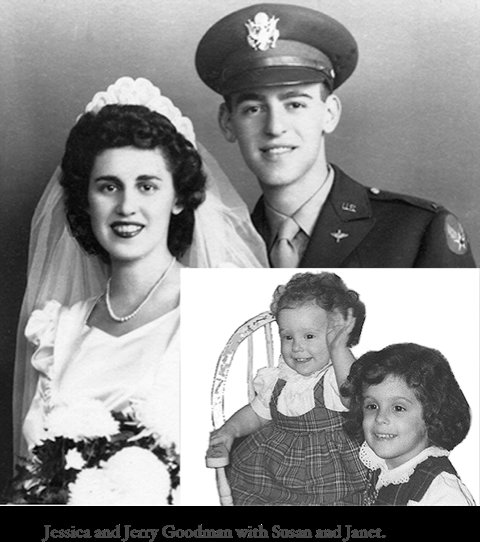 Janet (right, bottom) and her younger sister, Susie, are seen many years ago, flanked by her parents, Jessica and Jerry Goodman. Jerry spent the four years of World War II in the Pacific theater in an air control tower. “They were both wonderful,” said Janet.
Posted Thursday, April 15, 2021 10:00 am
by Len Lear

When I first saw Janet Gilmore's new book, “She's your Sister and You Love Her, Right” (produced by Auch Printing in Willow Grove) and looked quickly at the dozens of photos and accompanying anecdotes and quotes, I thought it would be one of those light-hearted, quick-read pocket-sized birthday gift books that are ubiquitous in gift shops and tourist destination stores.

But looks can be deceiving. Gilmore, 74, who used to write an occasional first-person slice-of-life column, “In The Belfry,” for the Local, often had some sharp edges to her quotidian anecdotes. And the same holds true for her new “Sister” book.

For example, I found lots of comments quite humorous, such as “Mother put my sister in her coach out on the porch to get some sunlight. I tipped the coach over. I told Mother the cat did it. We didn't have a cat.” Or “My father said, 'But she's your sister and you love her; right?' But he didn't have any sisters. So I figured he was just guessing.”

Then there are the hard-edged quotes that are anything but funny, such as “My parents actually had an addition built onto the house so that my sister and I could have our own rooms because, in the words of my mother, 'Otherwise, you'll kill each other.'” Or “She hog-tied me to the banister with duct tape and left me there.” Or “She came into my room and cut off my long hair while I was asleep.”

Janet has one sister, Susie, who is three years younger than she is. Of the 72 photos in the book (“the best of hundreds of submissions and front and rear cover photos”), only two are of Janet and Susie, one of which is on the front cover. When I asked other questions about her sister, Janet replied, “That's about all I want to say about my sister.”

According to Janet, the idea for this book came to her 20 years ago. “My training at NYU (masters degree in media ecology, 1974) taught me to look behind the scenes for the real story. After reading Carol Saline's book, 'Sisters,' it occurred to me that there was more to any two sisters' lives than donating kidneys and having surrogate babies.”

Thus, for two decades Janet has been collecting photos, including some that are clearly vintage, maybe as old as 100 years, and personal stories about sisters. The photos are from people Janet has known — friends, in-laws, former high school acquaintances, family, etc. “I wanted a wide representation,” she said. “I asked every woman I came in contact with — saleswomen, bank tellers — and asked them to scan pictures and send them to me. Some are from the internet. I asked permission when possible.”

Interestingly, there is no indication of who the people in the photos are or who are the people who contributed the comments and anecdotes. “I made an executive decision,” Janet explained, “to accord anonymity to all the sisters because I thought women would feel freer to tell me a story for a book if they were anonymous.

“About 100 people sent photos to me, but a lot of them weren't useful for the stories I was trying to illustrate. The other photos came from scrapbooks we came across in our book business, the internet and antique shops. Many of the pictures may show the surface, but the stories go beneath the surface. And did I mention that my readers think it's very funny? … If a woman had a sister, there was ALWAYS a story. Very few of the women I talked to DIDN'T have a story. And it ain't always as sweet as it seems. This book is the anti-saccharine; let's get real!”

Gilmore, a Chestnut Hill resident for 41 years who grew up in West Oak Lane and went to Girls High School, has been married for 35 years to Hugh Gilmore, a book columnist for the Local. She taught French in Cheltenham Township, worked at the Abington YMCA as an aerobics instructor and works at Stagecrafters Theater as a costumer.

Regarding the book, Janet said, “I don't have a mission to save the world. I hope each woman realizes that she wasn't the only one with sister problems … the quotes presented here might get laughs, but a lot of tears went into creating this book.”

Janet's book is dedicated to her parents, Jessica and Jerome Goodman. “The hardest thing I ever had to do was bury my parents,” she said. “They were both wonderful people.”

Janet is working on a volume 2 and welcomes sister-themed stories and photos. The book can be obtained from AbeBooks.com or from Janet directly at gilmorebooks@yahoo.com