Peter Hill began the Lakota Language Immersion School, where the only language spoken is Lakota, as a way to save the endangered language. by Lou Mancinelli If he went in search of a lifestyle … 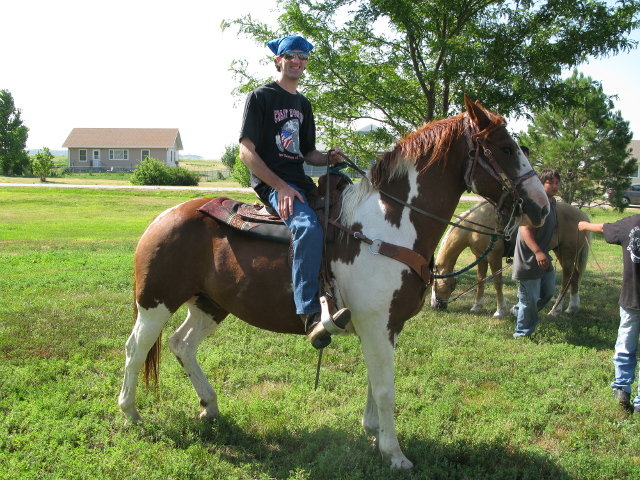 Peter Hill began the Lakota Language Immersion School, where the only language spoken is Lakota, as a way to save the endangered language.

If he went in search of a lifestyle completely different from the privileged one he experienced growing up in Chestnut Hill, with romanticized visions of Indian life swirling in his head, the reality of living for 13 years on the Pine Ridge Reservation in South Dakota has washed away those fancies as if they were sediment upon the looking glass.

But at the same time, it has transformed those idealistic visions into practical applications and revised perspectives. What Chestnut Hill native and 1996 Chestnut Hill Academy graduate Peter Hill, 34, discovered is a people still fighting to rise from the unspeakable atrocities committed against them by the U.S. government.

As a teenager, Hill visited the Pine Ridge Reservation during a series of summer work trips organized by the Church of St. Martin-in-the-Fields, the Episcopal church his family attended regularly.

And after Peter graduated from Carleton College in Minnesota in 2000 with a B.A. in Native American Studies, he moved to the Pine Ridge Reservation through an international teachers' program. He has lived there ever since, working as a history and language teacher at the reservation’s high school, Red Cloud Indian School.

This past November, Hill launched the Lakota Language Immersion School, or Iyápi Glukínipi, named after the Lakota phrase for “bringing the language back to life.” The school takes infants and kids, who must be under two years old, and provides them with a sound education. A unique factor, however, is that the only language spoken there is Lakota.

Hill’s efforts are among the last attempts to keep a once-thriving American Indian culture alive. If the language is lost, the rich culture of the Oglala Lakota Native Americans might go the way of the buffalo. Lakota is one of about a dozen remaining Indian languages. At one time there were at least 500 different Indian tongues.

If you’ve read of The Massacre at Wounded Knee or seen the movie “Bury My Heart at Wounded Knee,” then you have witnessed a part of the story of the Lakota. It will forever stain the history of America like a scarlet letter.

And in Hill’s experience, its affects still linger. He has taught students who passed through the Wounded Knee site on their way to and from school each day. Alcoholism plagues the reservation, situated in one of the nation's poorest counties.

“Dysfunctionality is the status quo around here,” Hill said.

The Oglala Lakota people were one of seven people who comprised the Great Sioux Nation. They were nomadic hunter-gatherers. Crazy Horse was the Oglala who led warriors that defeated General Custer and decimated his regiment.

But on Dec. 29, 1890, the U.S. 7th Cavalry Regiment massacred at least 150 Lakota children, women and men. The slaughter is known as the last battle of the American Indian Wars.

In recent years many youth and church groups have visited the reservation and carried out service projects. Hill's youth group from St. Martin-In-The-Fields traveled there for 10 days every summer from when he was a freshman at CHA until he graduated in 1996.

“I had never been anywhere quite like that,” Hill recalled about his early impressions.

The reservation, about four million square acres, larger than Delaware and Rhode Island combined, is about 60 miles west of the Black Hills. It was established in 1889 in the southwest corner of South Dakota near the Nebraska border. Only a small percentage of the land is suitable for agriculture.

“I grew up in a privileged setting, particularly in comparison to Pine Ridge,” said Hill. “And when you compare Pine Ridge to Chestnut Hill, it really is night and day. I was an idealistic college student interested in drawing myself in through the deep end … I wanted something radically different.”

His first position was as a substitute teacher. In 2001 he was hired by the Red Cloud Indian School, where he taught high school social studies. By 2008 he had become a certified Lakota language teacher. In 2012 he started teaching at the local college. He was also recently a Lakota language adjunct at Yale University.

Hill is an outspoken advocate of keeping the Lakota language alive. It is a dying language rarely taught in homes and spoken primarily by Lakotas over 50 years old.

Hill also met a girl named Amanda, whom he would marry in 2008 while she interned at a hospital on the reservation. When the two had a daughter, Charlotte, in spring 2010, Hill wanted some way for her to speak Lakota, so he decided he would only speak Lakota to her at home.

The Lakota language wasn’t a written language until the 1800s, according to Hill, who discovered that the language was an endangered species. The average age of a speaker of the language is 68 in a community with a life expectancy of 48. “I just got the feeling I wasn’t doing enough,” Hill said about trying to teach the Lakota language. “The clock was just ticking too fast.”

Hill runs the Lakota language school with the help of one staff member, but he must secure funding for the school to continue next year. When the school opened in November, Hill had only enough money to stay open for half a year. He had raised $13,000 through indiegogo.com, a site much like Kickstarter. The school has also recently been awarded three different grants worth a total of $29,000. He hopes to secure a federal grant that could provide hundreds of thousands of dollars.

If anything, Hill describes his time at Pine Ridge as a growth experience. He doesn’t regret the feeling of white liberal guilt and idealism that prompted him to go there in the first place. He’s seen many similar types come and leave the reservation since his arrival. Like the mythical Greek king Sisyphus, Hill is simply pushing the rock up the mountain one day at a time.

“It really is a place that’s been ravaged historically,” he said. “A lot of people have a lot of baggage.”

Still, Pine Ridge has had its triumphs. In the Red Cloud Indian School’s class of 2008 eight of 40 graduates were awarded Gates Millennium Scholarships, which cover the full cost of college tuition. One hundred percent of its students continued their education or enlisted in the military. And that same year marked the third consecutive year a Red Cloud student won the National Science Fair.

“I feel like the longer I’m out here, maybe I can contribute to things being more positive,” said Hill, “like when you leave a campsite a little nicer than the way you found it.”

No comments on this story | Please log in to comment by clicking here
Please log in or register to add your comment
Donate now to CH Local
The Latest
Mistakes were made
One of the things I’d like to do more in this space is give readers some behind-the-scenes takes about what happens at the Local. In talking to people, I regularly come to understand that the …
SCH Academy marks Black History Month with virtual visit from Senator Cory Booker
Deftly bridging the virtual distance to engage his audience, New Jersey Senator Cory Booker, kept over 250 members of the Springside Chestnut Hill Academy community spellbound as he spoke …
Chestnut Hill Hospital to host virtual talk on gut health
What’s upsetting your digestive system? Learn healthy tips and recipes to keep your digestive system working smoothly during a virtual session with Asyia Ahmad, MD, gastroenterologist, on Thursday, March 4 at noon.