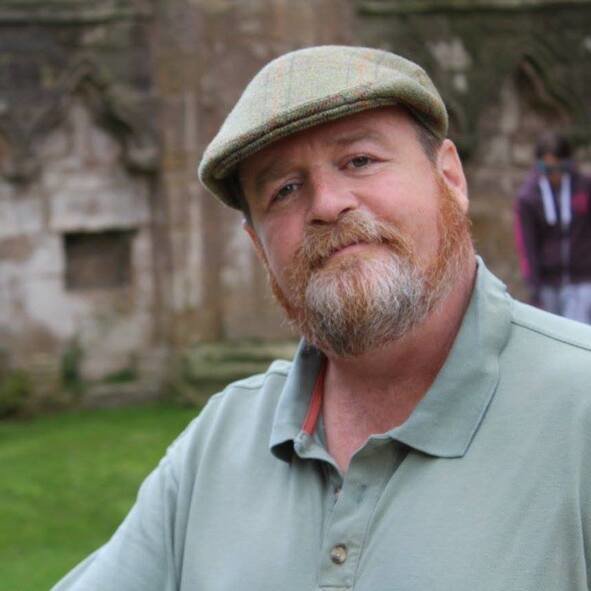 The Rev. Scott Robinson, a Chestnut Hill resident for the last 16 years, will host a book reading and signing for his recently published personal account of what it is like to live with Parkinson’s Disease on Sunday, Aug. 14, 3 p.m., at Booked, 8511 Germantown Ave.

“The Way In; What a Hospice Chaplain Learned Living with Parkinson's, in Poetry and Prose”  is a courageous, brutally candid revelation of Robinson’s own periodic rages, the last thing one would expect from a 58-year-old ordained interfaith Christian minister, former hospice chaplain, a poet and Ph.D in musical composition from the University of Minnesota and highly respected composer whose musical group, Mandala, has performed in churches, cathedrals, colleges and other venues around the country.

“My main purpose in writing the book,” Rev. Robinson told us in an in-person interview in his home, “is that so few people know anything about Parkinson's disease. If you are at an advanced stage and in a nursing home, no one will listen to you, so while I am still in a position to have a platform, I want to use it.”

Robinson was diagnosed three years ago, but prior to that he was misdiagnosed with spinal stenosis, he said, and had two very painful neck surgeries that did not help. Then a neurologist friend of his wife, who is also an M.D., told her that he thought Parkinson's disease might be the problem.

“When I did get that proper diagnosis and medications, I was able to get out of the wheelchair and the walker, and now I take a walk with our dog, Murphy, in the park almost every day,” Robinson said. “I never knew before I married a doctor how many misdiagnoses there actually are.”

According to medical experts, Parkinson's disease is a progressive disorder that affects the nervous system and the parts of the body controlled by the nerves. Tremors are common, but the disorder may also cause stiffness or slowing of movement. Symptoms worsen as the condition progresses over time.

Parkinson's disease affects the frontal lobe of the brain and may also make a person less inhibited. The patient may experience depression, fear, anxiety, loss of motivation, even rage at the inability to do things that were once second-nature.

“It was kind of enjoyable at first,” said Robinson. “You may say embarrassing things. I was asked at a dinner, 'Who wants the eggplant dish?' I said, ‘I hate eggplant!' But it did not stop there. I launched into a roaring tirade.”

Eventually it became much worse, Robinson said. He opens his book by writing that just before he started writing it, his wife and daughter had to flee to a friend's house to escape an episode of his explosive rage.

Although Parkinson's disease can't be cured, medications may significantly improve the symptoms.

“I may be a candidate for Deep Brain Stimulation. It's like what a pacemaker is for the heart. It can even out mood swings,” Robinson said. “The meds are effective, but the side effects can be awful. When I am off the meds, I can't take the dog for a walk in the woods or go down steep stairs. I have to plan my life around the meds. It is exhausting.”

In both poetry and prose, “The Way In” reveals what Robinson has learned from living with early-onset Parkinson’s disease. This part-memoir, part-poetry chapbook offers wisdom from great spiritual traditions about grief and death.

Robinson has worked as an actor, musician, Tarot card reader and college music professor, and all these experiences find their way into the book. The poetry, almost entirely rhymed and metered, requires no specialized training to make it accessible. “Poetry is a human gift, like singing,” said Robinson. “I want everyone to experience it.”

According to Terry Stokes, editor of earthaltar.org, a website “dedicated to the Anglican way of life,” Robinson's poem, ‘The Siege of Jaffa,’ “is one of the most incredible pieces I've read ... I felt that way even before the end made it clear that it was an allegory for Parkinson's.”

Robinson's wife, Alyson Ballantine, is chief medical officer at the Children's Hospital of Philadelphia branch in King of Prussia. Their daughter, Sophia, 16, is currently touring with a circus in New England. Their other daughter, Clare, 19, is a Hamilton College student in New York State.