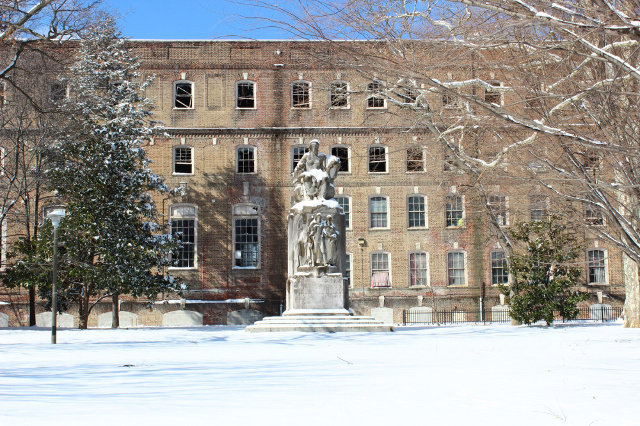 A view of the Germantown YWCA from Vernon Park. (Photo by Jill Saull)

The Germantown YWCA, at 5820 Germantown Ave., is only a shell of its former self. The once majestic Georgian Revival style red-brick building, designed by Louis H. Rush in 1914 as a haven for women, sits vacant and cluttered with debris.

It's hard to imagine how a building with such a distinguished history could become such an eyesore.

According to an article in the Local of Sept. 30, 2004, the Germantown's Women's Y is reported to be the third oldest YWCA in the world.

The building currently is owned by the Philadelphia Redevelopment Authority.

While many residents would like to see it demolished, Yvonne Haskins, a community activist and lawyer, said that for many Germantown residents the YWCA represents the meaning of community.

“When you consider that a thousand white women built the Y and then in the 1940s decided to invite black women who were living in the old Germantown Settlement Music building to come swimming, It speaks to me of the inclusive nature of the community. It says we are a community that wants to help each other and socialize together and that's what community is.”

She added that icons such as the YWCA “represent our history and our values” and should be “preserved and celebrated.”

“The fate of Germantown's YWCA will affect its central park, its commercial corridor and the future development of Germantown in a big way,” said Germantown resident Emaleigh Doley, who used to take gymnastics lessons with her sister Aine at the Y as a child.

Haskins and Doley started a petition and helped organize “Friends to Save the Germantown YWCA.” a campaign to preserve the historic building.

But the future of iconic building is in limbo as the community waits for recommendations from the Department of Licenses and Inspections (L&I).

Bennett Levin, who was L&I Commissioner from Jan. 1992 to Dec. 1995, said he was shocked at the condition of the site after touring the building with Councilwoman Cindy Bass and several other city officials.

He said combustible trash at least two feet deep lined the first floor and central stairwell to the second floor.

“Here we have a historically certified building of a significant architectural merit that is owned by an agency of the City of Philadelphia ,” Levin said. “Under the ownership of the city, it has lapsed into a state of significant disrepair and structural distress. The building is open, even though there is a big lock on the front door.”

He said L&I could send out its clean and seal unit and then send the Redevelopment Authority a bill.

“Here are two agencies of our government who have the ability to solve a festering problem in a building that has severe issues and they cannot get a dumpster and two laborers to abate the same conditions that led to the death of two firefighters in Kensington,” Levin said. “If the unimaginable happens and there is another fire in this building, who are we going blame?”

Garlen Capita, board president of Germantown United CDC, said she has been in communication with Brian Abernathy, executive director of the Philadelphia Redevelopment Authority (PRA).

She said that in conversations with Abernathy she was told that while an inspection was done by L&I a week following the meeting on Jan. 22, the PRA was still waiting for the report from L&I.

Recently the RDA denied a proposal by the Philadelphia-based Mission First Housing Development Corporation that was going to partner with Philly Office Retail and Center in the Park to convert the YWCA building into 50 independent senior-living units pending approval of state administered low income tax credits (Mission First would retain sole ownership of the YWCA site while Philly Office Retail would retain sole ownership of the mixed use market rate development next door).

When asked about the what he believes L&I will recommend, Ken Weinstein, president of Philly Office Retail, said, “If I had to guess, I would say they are going to find the YWCA to be imminently dangerous and that L&I will not hesitate in recommending that it come down.”

“That is especially true since it does not have an accepted proposal on the table,” he added. “With no future prospects and the building in very poor condition, I don't believe L&I will hesitate in taking it down.”

Bass said while she is not prepared at this time to discuss other possible proposals for the site, she did say that she has had some conversations that are “quite productive” and that she is excited about it.

“I think that this is really a conversation about two things – one is the condition of the Y and if it's able to be stabilized,” Bass said. “And two, what should go at that location.”

Whatever the end result is, Bass said she wants to make sure the public has some input because prior to the meeting there was very little discussion.

“I don't want to do anything that is the opposite of what the people of Germantown are interested in,” Bass said. “A lot of people felt like we should grab the first thing that came along. I feel a little bit differently.

Capita said that before the Jan. 22 meeting the community did not know anything about Weinstein's proposal.

“There are a lot of opportunities to see what the building can be, but until those two things happen – the building is secure and stabilized and there's a transparent process to identify or develop the site – it continues to stay this vacant structure that is blight on the corridor.

“One of the things we recognize is that the community can have great ideas, but if there aren't some resources in funding to put those ideas into fruition then they are just ideas. That's why we are flexible. We just want it to be a good use that serves the community well and puts the site back into productive use.”

Capita said while Councilwoman Cindy Bass has committed $1.5 million toward the costs to stabilize the building, the total stabilization costs are estimated to be between $3 to $4 million.

Councilwoman Bass said she hopes renovations at Vernon Park, which will cost more than $1 million and include new lighting, statute restoration, landscape improvements, new playground equipment, adult fitness equipment and revised pathways, will “create an even greater sense of urgency around the YWCA building.”

“I hope the commitment to Vernon Park will help attract more developers who have new ideas and a desire to rehab this historic property and continue to transform the commercial corridor,” Bass said. “In the meantime, I will take all reasonable measures to stabilize the structure of the YWCA to ensure it will remain a fixture of our community.”