How 2020 affected my reading: A curmudgeon's top 6 books this year

In looking back over my reading list for this year I was surprised to see that the great majority of books I read were on my Kindle.

How 2020 affected my reading: A curmudgeon's top 6 books this year 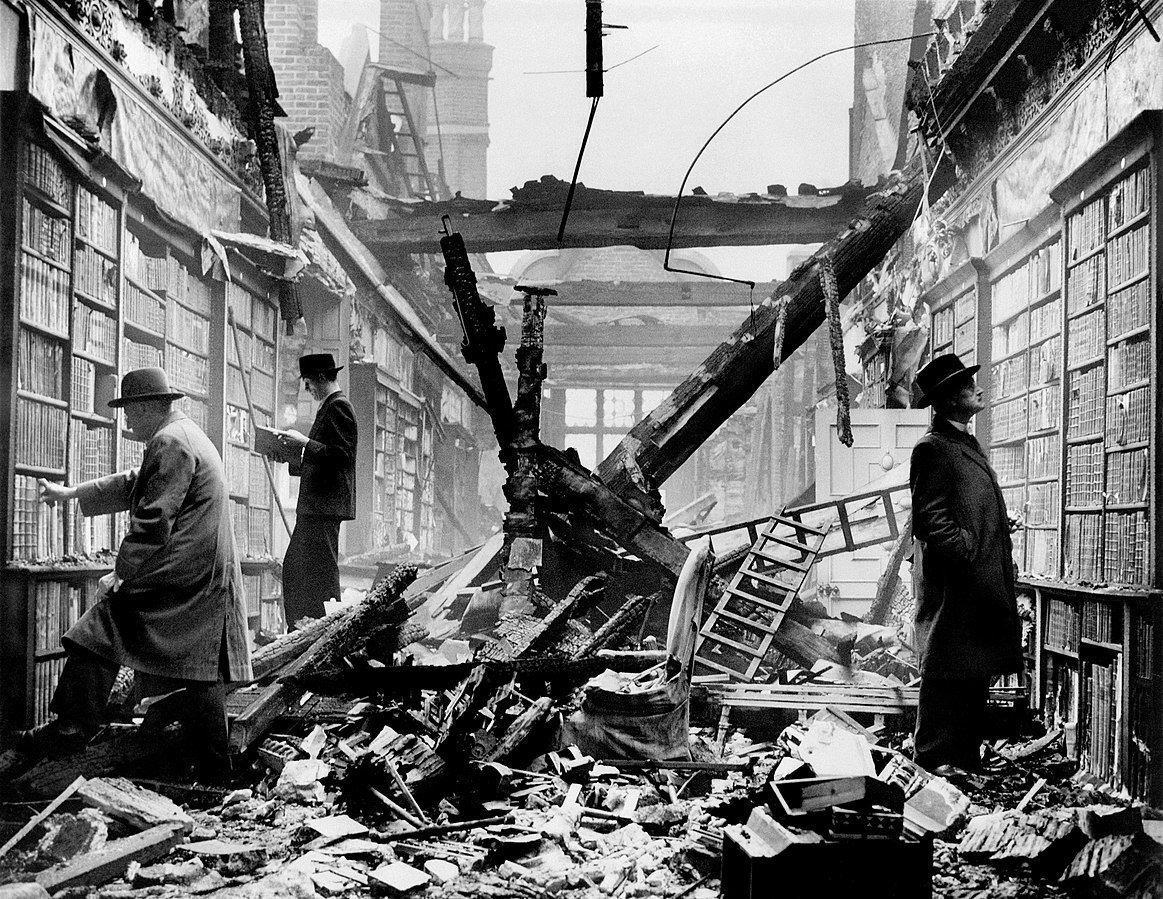 HOLLAND HOUSE, Kensington, London. An interior view of the bombed library at Holland House with readers apparently choosing books regardless of the damage. Photographed in 1940. The House was heavily bombed during World War II and remained derelict until 1952 when parts of the remains were preserved..Holland House, originally known as Cope Castle, was a great house in Kensington in London, situated in what is now Holland Park. Created in 1605 in the Elizabethan or Jacobean style for the diplomat Sir Walter Cope, the building later passed to the powerful Rich family, then the Fox family, under whose ownership it became a noted gathering-place for Whigs in the 19th century. The house was largely destroyed by German firebombing during the Blitz in 1940; today only the east wing and some ruins of the ground floor still remain..In 1940, King George VI and Queen Elizabeth attended the last great ball held at the house. A few weeks later, on 7 September, the German bombing raids on London that would come to be known as the Blitz began. During the night of 27 September, Holland House was hit by twenty-two incendiary bombs during a ten-hour raid. The house was largely destroyed, with only the east wing, and, miraculously, almost all of the library remaining undamaged. Surviving volumes included the sixteenth-century Boxer Codex..Holland House was granted Grade I listed building status in 1949, under the auspices of the Town and Country Planning Act 1947; the Act sought to identify and preserve buildings of special historic importance, prompted by the damage caused by wartime bombing. The building remained a burned-out ruin until 1952, when its owner, Giles Fox-Strangways, 6th Earl of Ilchester, sold it to the London County Council (LCC). The remains of the building passed from the LCC to its successor, the Greater London Council (GLC) in 1965, and upon the dissolution of the GLC in 1986 to the Royal Borough of Kensington and Chelsea..Today, the remains of Holland House form a backdrop for the open air Holland Park Theatre, home of Opera Holland Park. The YHA (England and Wales) "London Holland Park" youth hostel is now located in the house. The Orangery is now an exhibition and function space, with the adjoining former Summer Ballroom now a restaurant, The Belvedere. The former ice house is now a gallery space. The grounds provide sporting facilities, including a cricket pitch, football pitch, and six tennis courts..In 1962, the Holland estate sold a piece of land immediately to the south of what is now the sports field for the construction of the Commonwealth Institute.
Posted Wednesday, December 30, 2020 3:00 pm
By Hugh Gilmore

In looking back over my reading list for this year I was surprised to see that the great majority of books I read were on my Kindle. When time is not a factor, the wonderful Free Library of Philadelphia is my preferred way to get a book I want. In 2020 that was not the way to fly. With so many branch closings due to the pandemic, and the staggered hours, and the phone inquiries that were never answered, and the long response times, I was only able to borrow four books between March and December. Bless the staff, though, for they tried hard to keep a flow going.

Normally I prefer printed books. I love the texture and smell and feel, and even, yes, the sound of a page turning. Despite that, I don't normally buy books anymore unless they're for reference or for a collection I'm building. My home library is overstuffed as it is and I'm more concerned with thinning than fattening my shelves. Too, they're expensive if you don't know beforehand whether you'll enjoy them. Being a used bookseller by profession I can easily find cheap, used copies of books I want to read, but price isn't everything – there's also the added aspect of how quickly I can get my hands on a title I want to read.

My Kindle has spoiled me. If I must pay retail prices, the Kindle version is usually cheaper and always quicker. I can purchase and download and begin reading a book within two minutes of wanting it. Plus, the font is adjustable. I've bought many books over the years that I couldn't read simply because the print was too small.

My favorite book this year was, "The Splendid and the Vile: A Saga of Churchill, Family, and Defiance During the Blitz," by Erik Larson (2020). By coincidence I had started reading it when our (mostly) national shutdown began. As I got into it, I was struck by the many parallels between Larson’s description of London life during the Blitz and what the 2020 world at large was experiencing. The parallels are not exact, of course. We Americans may go to sleep in fear of COVID-19, but are reasonably certain our homes will still be standing tomorrow morning. We’re also given the impression that we have some measure of control over our fates through social distancing and hand washing. Yet, the sudden introduction of fear and distress to the lives we were living, the slackening of the economy, the loss of jobs, the dangers, the extreme alteration of our normal way of living, present many similarities with the England described so vividly in this amazingly readable and informative book.  I often find myself remembering this story and taking heart from it as we continue to endure our own lives under besiegement.

A trio of books by Hunter S. Thompson may seem like an odd second-favorite, but I really enjoyed rereading him this year. I actually found his writing comforting. "Hell's Angels: The Strange and Terrible Saga of the Outlaw Motorcycle Gangs" first appeared in 1968. Thompson presented a fascinating picture of the Angels as a subculture and also, in answer to the perennially staged question (originally posed in the movie "The Wild Ones") "What are you rebelling against?, answered by, "Watta ya got?", he goes off on the absurdities, blandness, hypocrisy, greed, and soullessness of American culture back in the 1960s. (Same with his "Fear and Loathing in Las Vegas: A Savage Journey to the Heart of the American Dream," and "Fear and Loathing on the Campaign Trail '72.") The parallels to today are still spine tingling and repulsive. Given this year's justified protest marches, unjustified police violence, and the ugly, lie-ridden presidential campaign of 2020, I no longer find Hunter S. Thompson weird. Or over the top. More like Thoreau, perhaps.

In for a penny, in for a pound. My third choice for an enjoyable, timely read was Michael

Cohen's "Disloyal: A Memoir: The True Story of the Former Personal Attorney to President Donald J. Trump." I believed about half of what he'd written, since Cohen has an embittered agenda, but even that half was enough. It made me wish this book could be adapted for elementary school so all future American children know they've got to keep their eye on the White House till. It's that revealing.

My final choice for today, in talking about books to read by the crackling fire of Rome burning, was Carl Hiaasen’s "Squeeze Me." I've read all of his bizarre, very funny, crime novels, but this one was really tasteless and off the wall. It portrays a fat, clueless president and his glamorous, spoiled, disloyal wife. And an invasion of Burmese pythons down there in Florida during the soul-deadening gaiety of a billionaire's-only fund raising. Another revolting, crude, comical, pointedly political satire by Carl Hiaasen.

I read more than 50 other books this year, but the ones I've mentioned are the ones I found most comforting during this terrible year. "Comforting" in the sense that they provide the relief that comes in knowing that, despite all the heroism we have seen this year, one is not alone in noticing that this awful year has been made more awful by some very awful people. Thank goodness for books in our hours of need.

Hugh Gilmore has written about books for dozens of newspapers around the country, including the Baltimore Sun, Louisville Courier, Toledo Blade and Albany Times-Union. He lives in Chestnut Hill and often travels beyond its borders.