How Chestnut Hill Hospital was saved

There were plenty of smiles at Chestnut Hill Hospital last Tuesday when the 120-year-old community institution marked the completion of its sale to a three-partner consortium.

How Chestnut Hill Hospital was saved 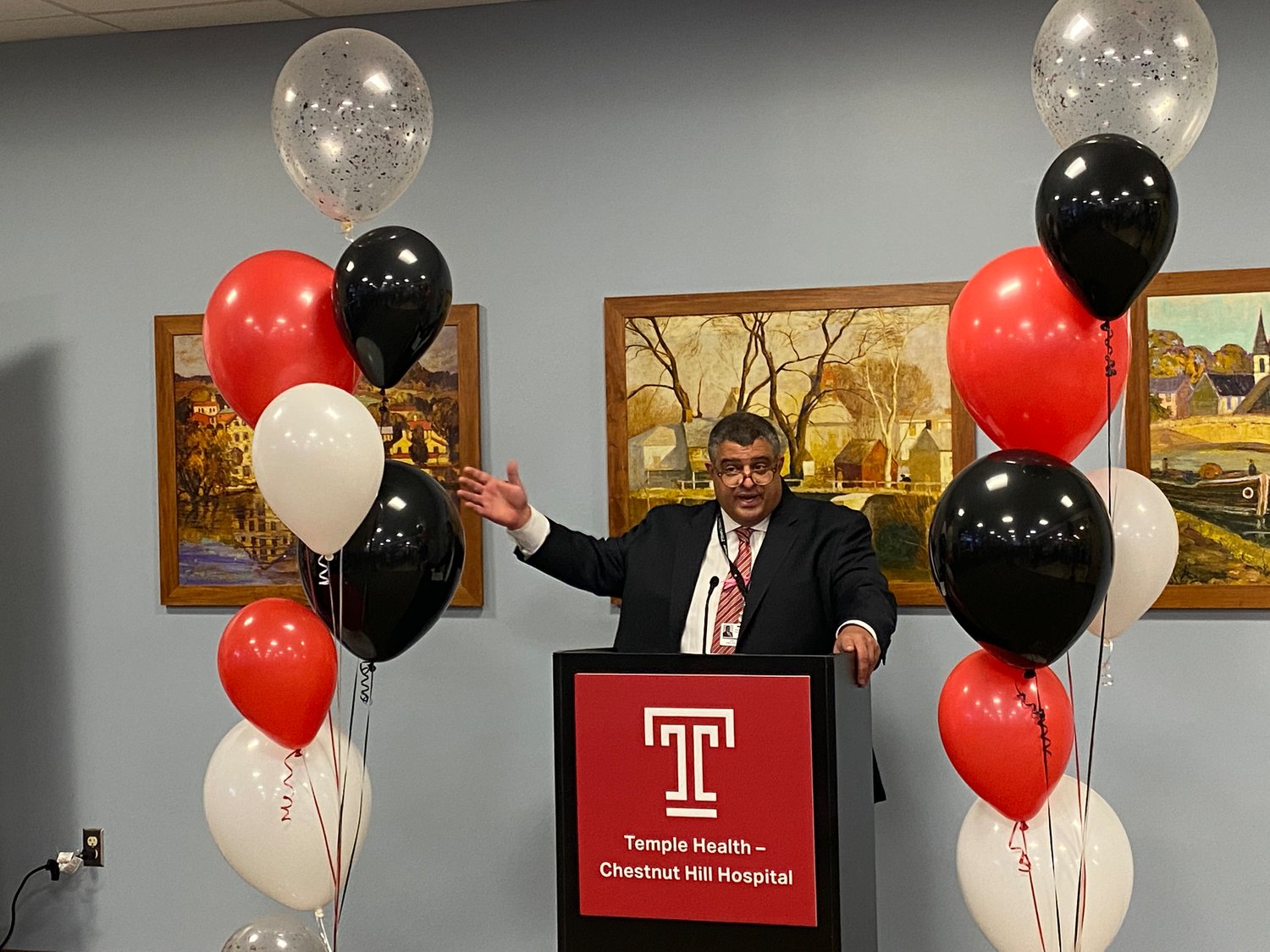 John Cacciamani, President and CEO of Chestnut Hill Hospital, celebrates its purchase by a Temple-led consortium.
Photo by Tom Beck
Posted Wednesday, January 11, 2023 12:00 am
by Tom Beck and Carla Robinson

There were plenty of smiles at Chestnut Hill Hospital last Tuesday when the 120-year-old community institution marked the completion of its sale to a three-partner consortium led by Temple Health with a party and a press conference.

But of all those who attended, it was probably John Cacciamani, the hospital’s president and CEO since 2012, who felt the most like celebrating. For the last three years, he’s been steering the organization through a period of serious challenge – watching its former owner, Tower Health, opt to close two other community hospitals when it put Chestnut Hill on the market, and then see a potential purchase deal with Trinity Health Mid-Atlantic fall through last January.

“Maybe the community didn’t know it or feel it at the time, but my team can tell you that my fear levels were through the roof,” Cacciamani said. “Watching both Jennersville and Brandywine [Hospitals] close, it felt like the writing was on the wall. Then when the deal with Trinity went south, it seemed like we were potentially going to have a very bad outcome. That’s when I got busy trying to figure out how we were going to get out of this.”

And figure it out he did. But it wasn’t easy – which is why, many stressful months later, he threw a party with his press conference. Representatives from all three of the facility’s new owners – Temple Health, which owns 60% of the hospital, and Philadelphia College of Osteopathic Medicine and Redeemer Health, both of which own 20%, showed up to celebrate.

“The plain fact is that this sale would not have happened without John’s commitment, perseverance and vision,” said Dr. Marc McKenna, who has been at the hospital since 1994, runs Chestnut Hill Hospital’s family practice and is the residency program director of the family medicine program. “This is a rocky time for health care, and a lot of hospitals are not making money, so for him to get this accomplished and put us on a stronger financial footing has been just wonderful.”

Cacciamani said the hospital’s new owners give it exactly what it needs and that he has enormous gratitude for each member of the consortium because it was a complicated deal that wouldn’t have happened without genuine commitment on their part.


“We wound up with a big medical school, large purchasing power, great relationships with the payers...and an infrastructure where we could grow,” Cacciamani said.  “This is a profound act of kindness for the community, and that is undeniable. None of them needed to do this. This wasn’t a must-do for any of their boards. They could have just let it go. But the fact is they have an interest in this community, and they wanted to be sure that Chestnut Hill Hospital survived.”

When Cacciamani took over the leadership of the hospital almost 11 years ago, he was tasked with the job of improving the quality of service and growing the business. And he’s done that.

“At that point, voluntary visits to the ER were numbered at about 17,000 to 18,000 per year, and now we’re at 41,000,” he said. “Our quality has improved, our mortality is considerably better than expected, or predicted, and the community is using us regularly. These are all numbers that made us attractive to Temple and their partners. They could see that we were a solid shop.”

In 2004, the Board of Trustees tried, unsuccessfully, to sell to a joint venture of Vanguard Health System and University of Pennsylvania Health System. A few years later, the hospital was sold to Community Health Systems (CHS), a Fortune 500 company based in Tennessee. Then, in 2017, Tower Health bought it – along with four other hospitals.

But then Tower’s financial troubles began.

“I could see it coming,” Cacciamani said. “Finally we got to the point where everyone agreed that it made sense to sell, but by then the market had gotten so bad, nobody was really interested.”

Trinity Health signed a non-binding agreement of sale for the hospital before the deal fell through in January.

“Trinity Health Mid-Atlantic determined that it could not identify enough synergies that would result in substantial benefits for patients and the community,” Tower CEO Sue Perrotty wrote in a memo to employees at the time.

Eventually, plans for the hospital’s sale to the consortium of Temple, PCOM and Redeemer broke in August of last year.

At the press conference last week, staffers handed out white T-shirts adorned with the Temple “T” logo. Below it were the words “better together.”

David Kuo, PCOM’s associate dean of graduate medical education, told reporters his organization was “excited” to be a part of the consortium and for having a place for PCOM students to hone their skills in the hospital’s residency program.

“We're hopeful that more of our residents will then have a great experience and maybe join the staff here,” he said.

Michael Laign, president and CEO of Redeemer Health, singled out Temple’s team for the leadership it provided to make the sale possible.

“If it wasn't for them, we wouldn't be standing here today,” he said.

Like those who spoke before him, Temple Health president & CEO Michael Young, took note of the work, time and effort that stakeholders put into the deal.

“You have no idea how many tens of thousands of man hours have happened in the last 30 days to make this go as smoothly as it did,” he said. “This alliance is really a unique opportunity to get the best…residents, teaching, faculty, [and] new services focused on the community.”

The new ownership is not expected to have any immediate impact on current services offered at the hospital, Cacciamani said. He and his leadership team are expected to remain at the helm and there are no plans to lay off any of its 827 employees.

“Like it says on our shirt, we're better together,” Young said from behind the podium last Tuesday. “And we really are.”