How to grow flowering orchid cacti on your enclosed porch

My wife, Valerie, is particularly fond of the flowers that bloom on our front porch for a month starting in mid-April. The orchid cacti (two specimens are in bloom in the picture) have survived another winter on our climate-controlled, enclosed front porch.

How to grow flowering orchid cacti on your enclosed porch 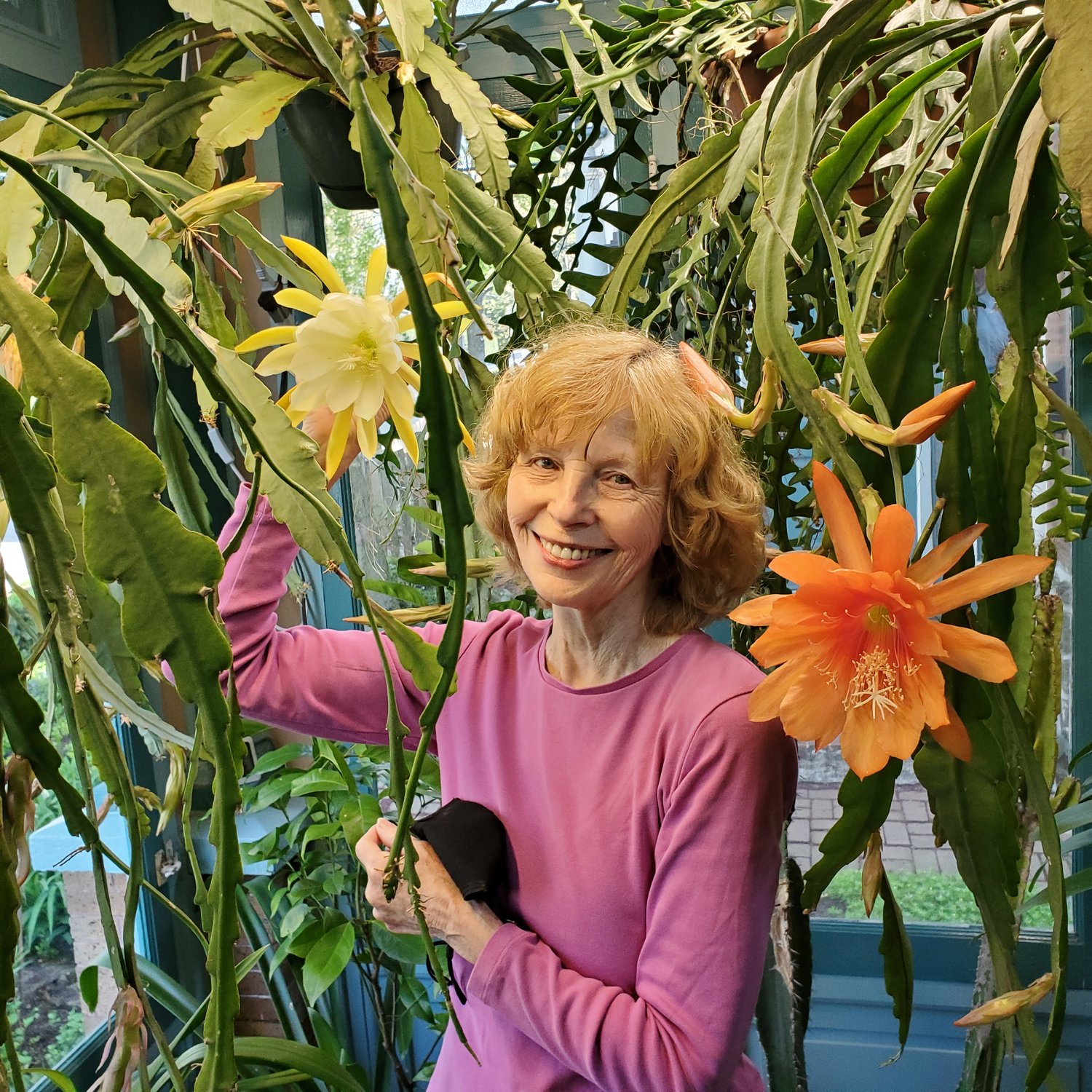 Valerie with a giant cactus flower blooming on our enclosed porch.
Posted Friday, May 21, 2021 10:30 am
by Stan Cutler

My wife, Valerie, is particularly fond of the flowers that bloom on our front porch for a month starting in mid-April. The orchid cacti (two specimens are in bloom in the picture) have survived another winter on our climate-controlled, enclosed front porch. If you drove past our house on a dreary winter day, you might have been cheered by the bright green sight of Valerie’s plants. The beauties in this picture are Orchid Cacti (Epiphyllum). Valerie has specimens of four varieties: red, yellow, fuchsia and orange. The picture was taken in mid-April, the beginning of their flowering season. The red one had also bloomed but was outside the frame. In winter, at least twice a day, she monitors the temperature and lighting controls. She synchronizes the light timers with the daylight hours and turns the thermometer dials of portable electric radiators to keep the porch temperature between 45 and 55 degrees F.

In late summer, she prepares the porch for the return of the orchid cacti from their seasonal home in the backyard. In the warm months, they hang from long galvanized pipes running horizontally through two Red Maple trees, queens of our narrow lot. Shortly after we bought the house in 2000, we noticed how the architecture of the trees could hold pipes on which to hang flower pots. In one of the trees, the crotches have completely grown around the pipes, as if the tree embraces her summertime friends. We couldn’t remove those pipes if we wanted to.

Orchid Cacti are epiphytic forest plants. In the wild, they grow in the angles where branches emerge from trunks, clinging to the crevices with tight knots of tough roots. They spread outward with great vigor, making them hard to live with in tight quarters, best nearer the ceiling than the floor. Valerie prunes the leaf-stems to keep their diameters under six feet.

Every gardener knows that overwatering kills cacti.  An epiphyllum is a cactus and will die as quickly as one of its thorny desert cousins.  Valerie pokes a finger into the plant medium to make sure it’s completely dry before watering.  This is particularly important in the winter, the season when she waters the porch plants once every three or four weeks. Starting when the buds appear and until the end of flowering season, she adds high phosphate plant food to their water.  She favors a product called Tiger Bloom.   In the summer she uses plain water mixed with Feed Me Orchid Food, just as she does for the orchids hanging with them in the trees.  She treats an epiphyllum like a cactus in the winter, like an orchid in the summer.

In March, flower buds emerge along the edges of the leaf-stems. One of the secrets of getting orchid cacti to bloom is to leave them alone during flowering season. Changing their location will cause the buds to fail, the season to be lost. Left alone, the buds expand to seven or eight inches in length before bursting open. The flowers are precious, wilting less than two days after they open. But the leaf/stems produce multiple flowers in succession, a new one opening when another wilts. Because she has so many, Valerie can be assured of admiring new Orchid Cactus flowers with her morning coffee every day for over a month. As you can tell from the picture, that’s okay with her.

The problem most people have with Orchid Cacti is architectural. The Red Maples have multiple trunks that branch out six or seven feet above ground, perfect for the pipes. The fact that the previous owners enclosed the front porch was pure luck. Then again, Valerie might have recognized the horticultural potential of such an enclosure and insisted that we undertake a conversion.  She’s had me build a small greenhouse, construct a deck for her container plants, terrace portions of the backyard, install plexiglass shelves in east windows, make trellises, hire masons for retaining walls, dig a pond, etcetera.  Had the previous owners not done it, she would probably have insisted that we remodel the porch after we bought the place. Such is life with a fanatic.

If you have the right architecture, both natural and manmade, Orchid Cactus are easy. Valerie has gotten new plants to propagate from the 4 to the 6-inch-long segments she cuts off when she prunes. She puts them in a shady place for a week or so, until the cut ends start to callus. She put the pieces upright, callus ends down, in potting soil. They soon start roots and are ready for permanent planting in light cactus medium a few weeks later. She usually puts four or five Orchid Cactus cuttings in the same pot. For people like Valerie, the spectacular results are well worth the effort.

The best of both worlds: Elements of a successful space