If ever there was a person who deserved some good news, it is Veronica Hally, an injured Army war veteran with severe PTSD and anxiety that caused her to retire from the military. She also suffers … 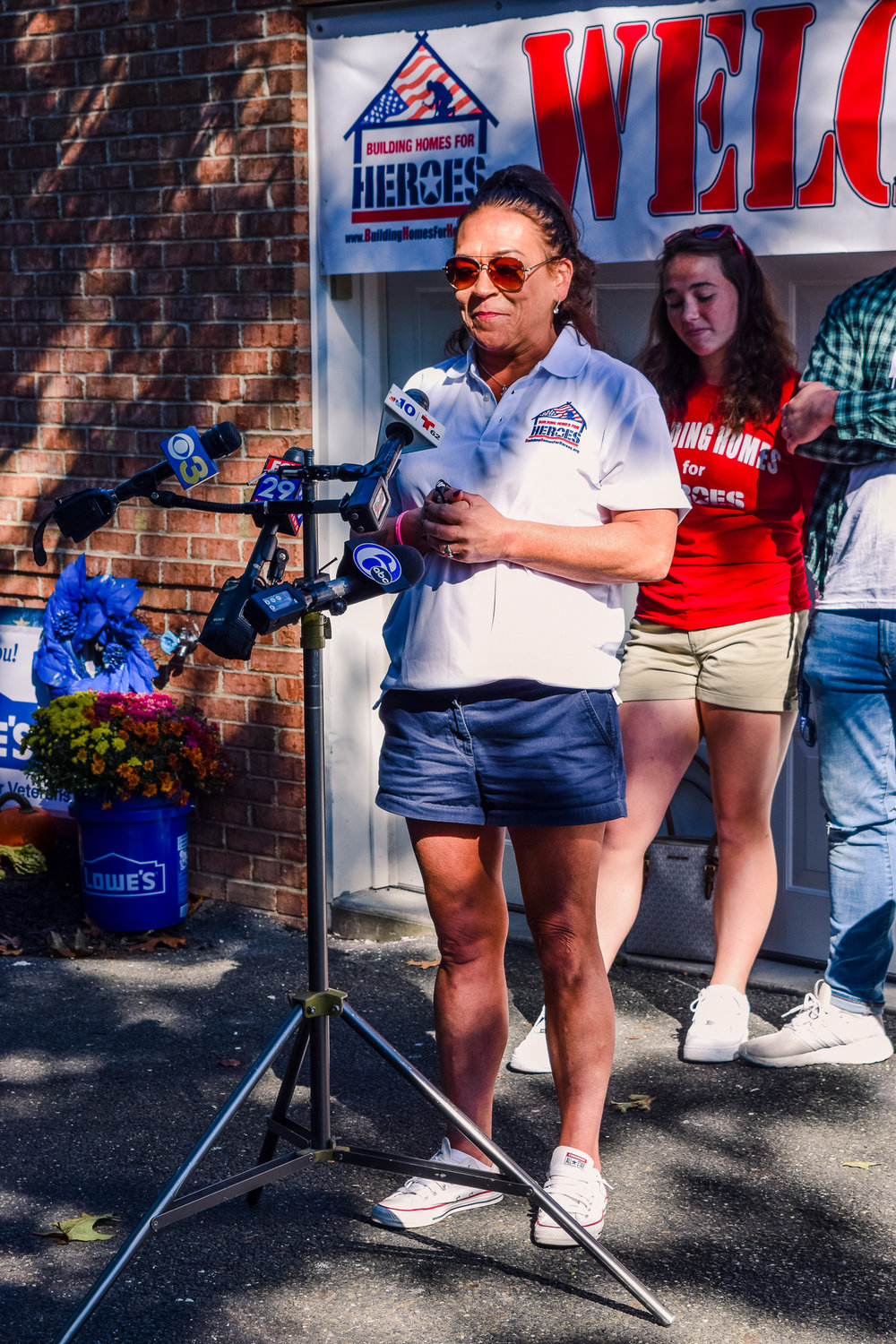 An injured local war veteran, former Army Staff Sergeant Veronica Hally, is seen on Sept. 29 being gifted a mortgage-free home in Glenside by the nonprofit Building Homes for Heroes. 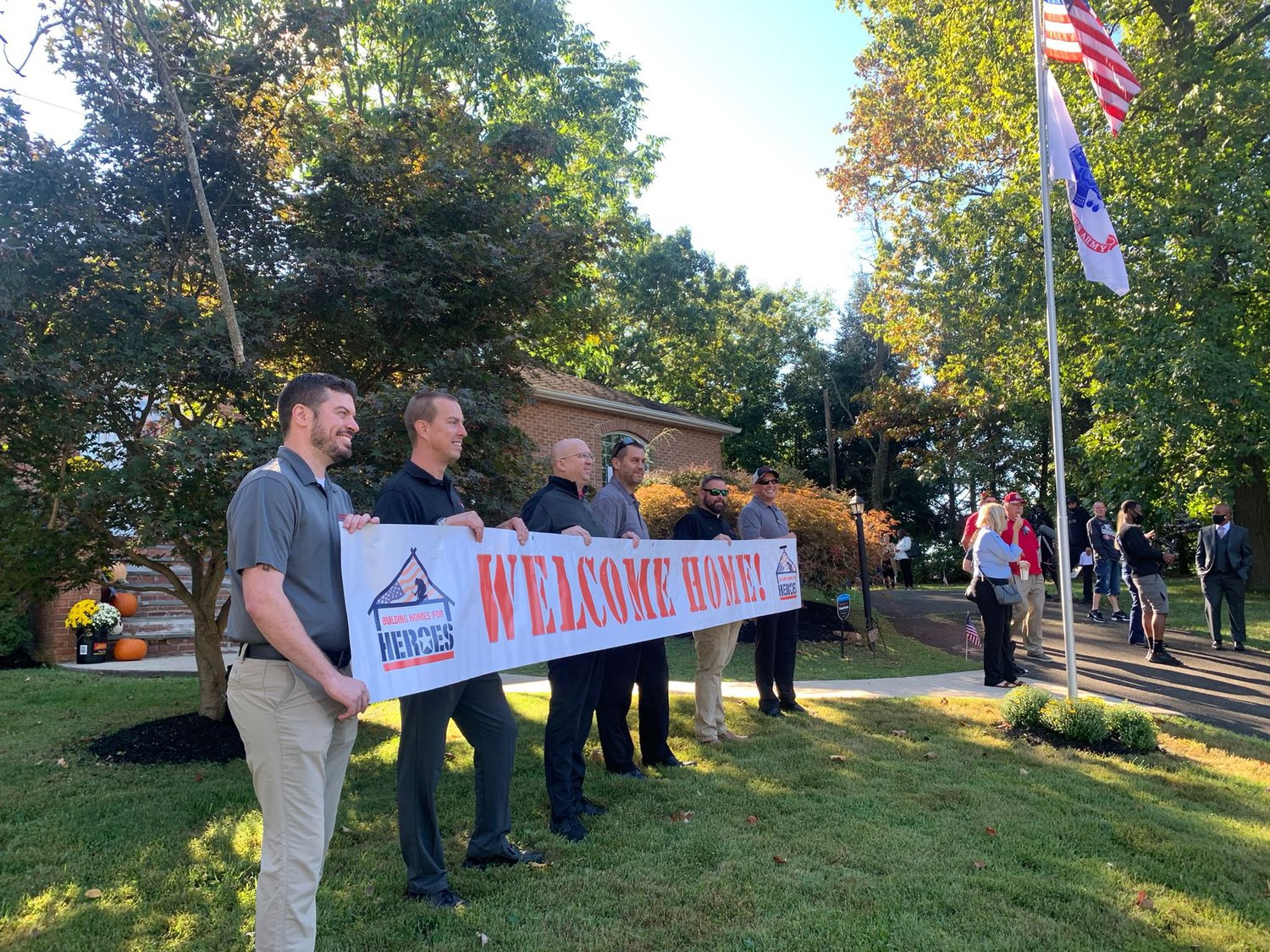 At the “Welcome Home” ceremony on Sept. 29 at the new house given to Veronica and her children, men holding the banner were from Advance Auto Parts, one of the participating sponsors that donated to Building Homes for Heroes to make Veronica’s new home possible.
Previous Next
Posted Thursday, November 11, 2021 6:00 am
by Len Lear

If ever there was a person who deserved some good news, it is Veronica Hally, an injured Army war veteran with severe PTSD and anxiety that caused her to retire from the military. She also suffers from tinnitus, carpal tunnel syndrome in both hands and chronic lumbar strain. The former Staff Sergeant medically retired in 2019 after 23 years of military service.

But on Wednesday, Sept. 29, of this year, Hally received the gift of a lifetime. On that day a nonprofit organization, Building Homes for Heroes®, in partnership with JPMorgan Chase, Lowe’s Home Improvement, YORK heating and air conditioning company and Google, among several other corporate partners, gave a mortgage-free home in Glenside to Hally, where she will live with her three children — daughter Frankie, 16, and two sons, Gage, 24, and Bobby, 8.

“Building Homes for Heroes® and the businesses that contributed to the home are amazing,” Hally told us last week. “I am eternally grateful. I do not feel worthy of the beautiful home that we will have forever. We are moving into it slowly but surely.” (They are living in Havertown until the move to the new Glenside home is complete.)

According to spokesperson Liz Sternby, Building Homes for Heroes® builds and gives mortgage-free homes, completes home modifications for veterans and their families, and provides services along their road to recovery to help them live a fulfilling life. “The organization is strongly committed,” Sternby said, “to rebuilding lives and supporting the brave men and women who were injured while serving the country after Sept. 11, 2001, during the time of the wars in Iraq or Afghanistan ... It's our honor to support the men and women who have loyally and courageously served our country.”

A recipient of the Army Commendation Medal, Global War on Terrorism Service Medal and many other commendations, Hally was given a new home that was specifically outfitted for her needs. The home was presented by Lowe’s Home Improvement, which has donated $2.5 million to Building Homes for Heroes® and sponsored the organization’s effort to give 11 homes in 11 weeks in honor of the 20th anniversary of the 9/11 catastrophe and Veterans Day.

Hally grew up in Delaware County, attended Archbishop Prendergast High School and Saint Joseph’s University. She joined the military in 1996 because “I wanted to serve my country and receive a college education.”

Her more than two decades of service included tours in Iraq in 2002 and Afghanistan in 2012. She was also stationed in Egypt in 1999. Working as a federal agent during her service for the Army’s Criminal Investigator Academy, Hally investigated hundreds of deaths and worked with the FBI to track terrorists across the globe. “I attended more than 700 autopsies of U.S. service members killed in action,” she said.

Her investigative experiences earned her many accolades, including Special Agent of the Year, but also have left Staff Sergeant Hally with serious medical issues.

Building Homes for Heroes® was founded by New York City businessman Andy Pujol after he volunteered in the search-and-rescue operation at the World Trade Center after the Sept. 11 terrorist attacks. Since 2006, the nonprofit has modified and given more than 275 homes in partnership with corporate institutions. Since 2011, for example, JPMorgan Chase has donated more than 1,050 mortgage-free homes to veterans and their families in partnership with nonprofits. Since 2011, they have also hired more than 16,000 veterans.

For more information, visit buildinghomesforheroes.org. Len Lear can be reached at lenlear@chestnuthilllocal.com