In Thursday's match against the ANC Lions, SCH had lacked both scoring and ball possession, and injuries were certainly partially to blame. 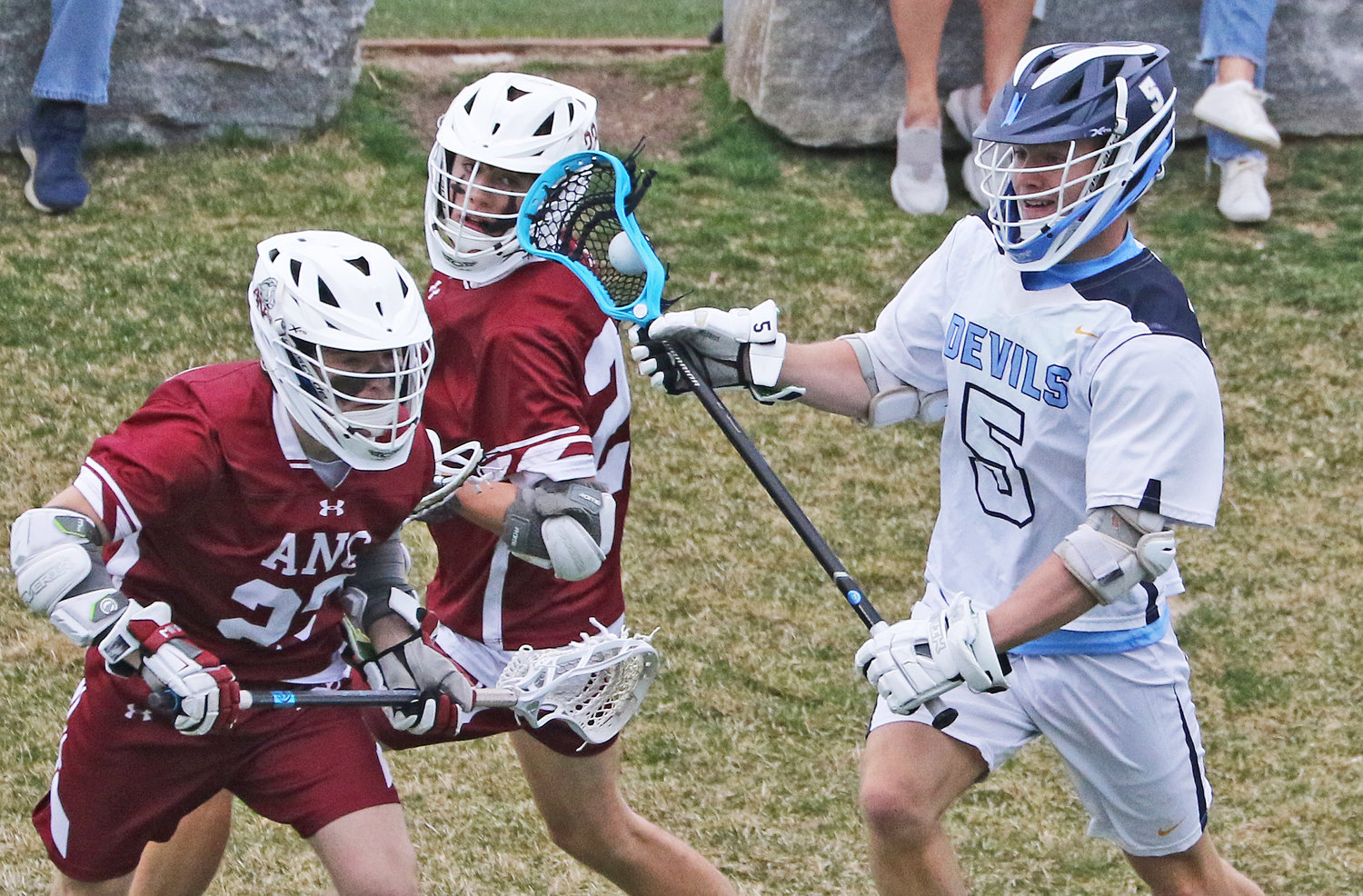 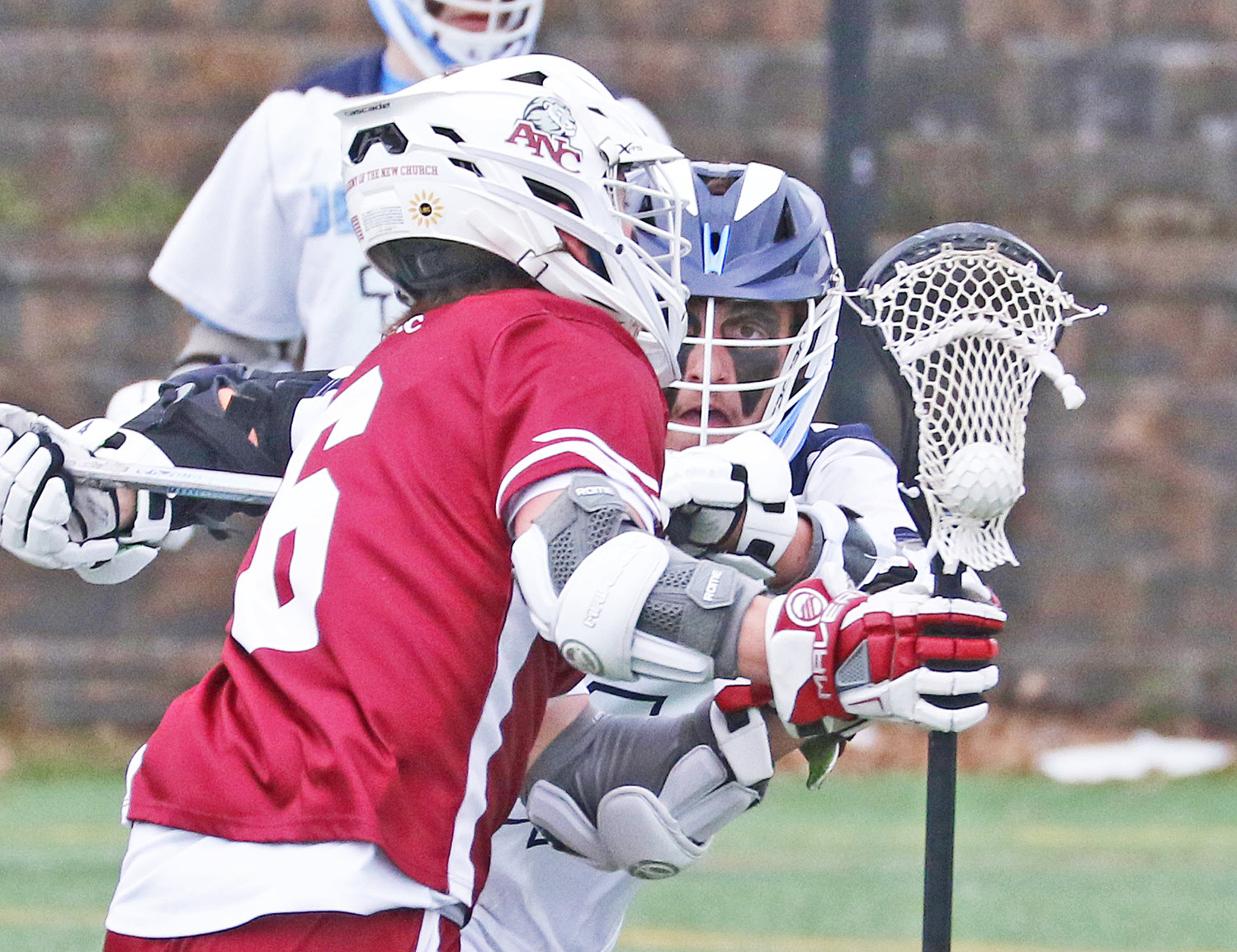 "It's been a tough month of March for the Blue Devils," observed Brian Dougherty, the fifth-year head coach of the boys' lacrosse team at Springside Chestnut Hill Academy.

Dougherty had just seen the month end with an 8-3 home field loss to the Academy of the New Church, a setback that gave the Blue Devils a 2-3 record in the young season.

In Thursday's match against the ANC Lions, SCH had lacked both scoring and ball possession, and injuries were certainly partially to blame. One of the players out of action was leading scorer Brendan Dundan. In a victory on the road against St. Alban's School earlier in the month, the junior had pumped in seven goals while handing out four assists.

Ball possessions start in the center circle, and another injured Blue Devil last week was face-off specialist Ross Prince, a sophomore who is thought by Coach Dougherty to be among the best in the high school game at present.

"Possession was a key today," Dougherty remarked after the ANC affair, "and the face-off isn't the only aspect of that. Possession is also about clearing the ball and about winning the 50/50 balls. We turned the ball over on clears, and on the 50/50's, they beat us to the ball almost all the time. Credit to them, they played a tough game."

Partly due to the team's personnel problems, Dougherty's group of starting attackers last Thursday was a young one made up of sophomore Alec Tulio, freshman Bryce Coletta, and eighth-grader Cole Carberry. At the other end of the field, junior Charlie Erdos and sophomore Hayes Schreiner had been close contenders for starting goalie. Dougherty gave Schreiner the nod, and feels that Erdos is definitely a capable back-up.

Schreiner was in the thick of the action right from the get-go on Thursday, as his team's possession problems quickly became evident and in a little over four minutes ANC went up 2-0 on successful shots by Hunter Aquino and Jack Joyner. The Blue Devils regrouped and got on the board a little over five minutes in, thanks to junior Neil Hutchinson.

Later in the same minute, Coletta cashed in off an assist from Carberry to level the score at 2-2. If fans thought that this presaged an afternoon of back-and-forth shifts in momentum, they were wrong.

Less than two minutes into the second quarter, the visiting Lions had Joyner cut across the front of the goal from left to right and score. The Blue Devils' Schreiner made a nice stop on a player coming from behind the cage on the left, but with 3:20 remaining in the first half ANC's Joyner was left open to complete a personal hat trick.

Joyner then fed the ball from behind to help Aquino give ANC a 5-2 lead with 41 seconds left in the first half.

The third frame opened with an impressive save in the SCH net by Schriener, but New Church would add three more points in the period thanks to Joyner (who scored twice here) and Owen Carr.

The Lions' lead was now 8-2, and SCH's Schreiner kept it from growing even more by denying an attempt by visitor Brady Carver while SCH was playing shorthanded late in the third round.

The Blue Devils hampered themselves with penalties in middle of the fourth quarter, but did notch a third goal with 3:05 left to play, when junior Will Freeman scored from the top of the offensive set off a pass from sophomore Stevie Pileggi.

Going forward, having players get off of and stay off of the injured list will be a key for the SCH Blue Devils.

"We've been struggling with that," Dougherty reiterated. "It seems like we never get the same guys out on consecutive days. It's shoulders, and heads, and thumbs, and COVID and whatever. It's tough to get cohesion."

On a more positive note, he summed up, "I think that when we can get everybody together, we'll be a much better team than we were last year."