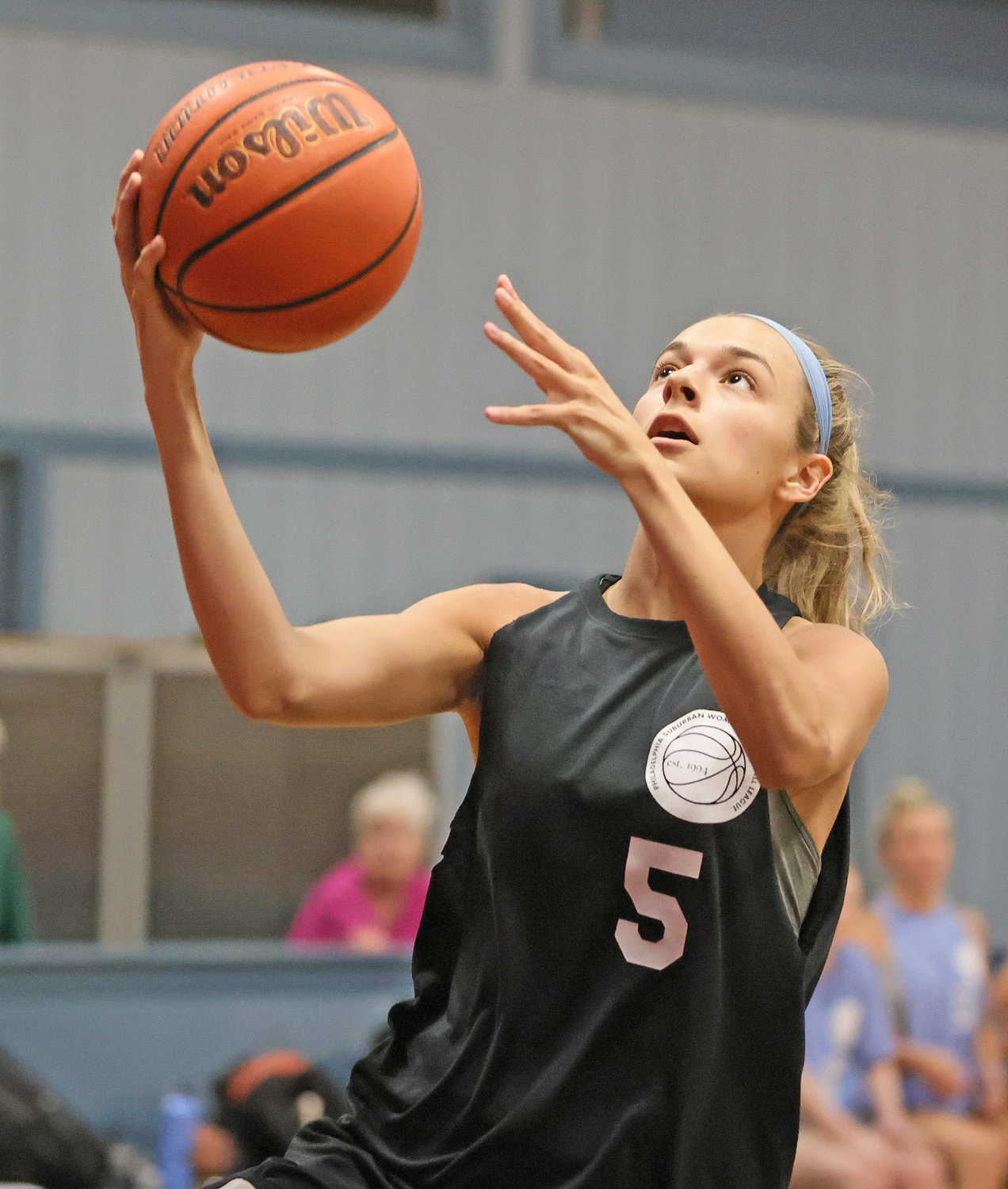 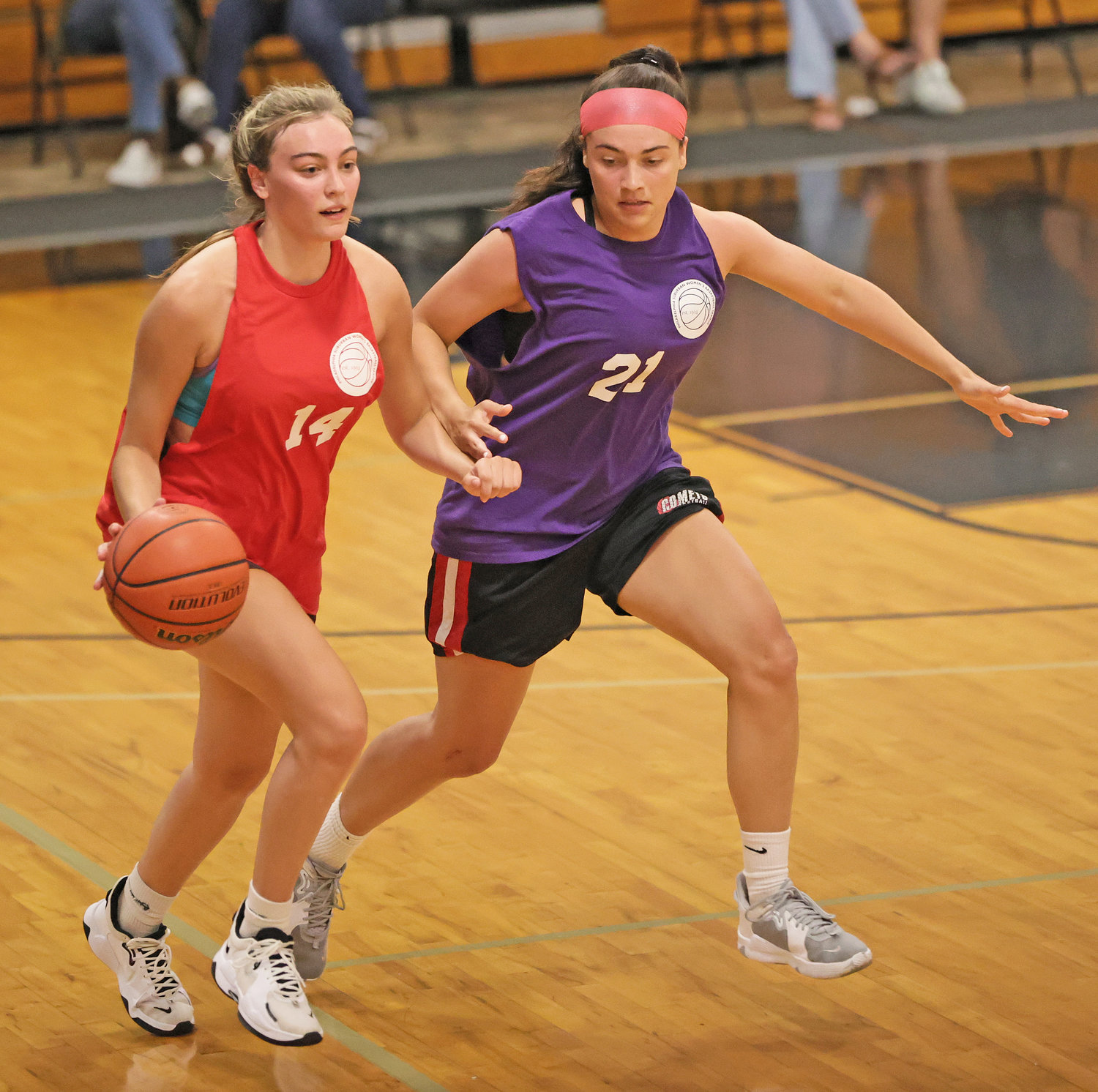 In college summer league play last week both Team Red (Chestnut Hill College) and Team Black (Jefferson University) went 1-1, and Black won 48-39 when the teams met head-to-head on Thursday evening. Red finished the week with a 2-2 record, and Black was 1-2, since an earlier game against Team Purple (West Chester University) had to be postponed.

A collection of University of the Sciences alumni, Team Heather Maroon, emerged alone atop the standings with a 4-0 mark. Team Columbia Blue (Holy Family University) ended the week at 3-1, and all the other teams were at the .500 mark or below.

In the early round of games on Tuesday evening, Team Heather Maroon became the sole league leader, climbing to 3-0 by defeating Jefferson's Team Black, 53-49. Black received two three-pointers and a team-high 10 points from guard Emily Keehfuss, who used to battle against Mount St. Joseph's when she played for Nazareth Academy.

In the late session on Tuesday, GA grad Alexa Naessens' Team Kelly Green put up a good fight but ultimately lost to Columbia Blue, 51-48. Naessens was four-for-four from the foul line and totaled 10 points.

Another game had three Germantown Academy alumni on the court at the same time. Team Orange, mostly Ursinus College athletes, received eight points from Charlotte DeLello and seven from Sarah DiLello, while Team Sun got four points from Gettysburg College's Caitlin Priore (GA '20), who was making her summer league debut.

The outcome was a 75-62 victory for Sun, which has a truly eclectic mix of players. Sharing the team high of 14 points were Priore's Gettysburg teammate Emily Violante and Jasmine Elum, who has been out of college for 10 years. Elum played high school ball for Bodine in the Philadelphia Public League, scoring over 2000 points.

Traveling down from northwestern Lehigh County, rising CHC sophomore post player Emily Sekerak led the summer Griffins in the first quarter with eight points, but they trailed Purple, 17-12. With incoming freshman Sara Tamoun hitting two three-pointers and a shorter shot in the second quarter, Team Red was able to enjoy a 28-24 halftime lead.

CHC picked up five points in the first half from another new addition to the program, sophomore transfer Siobhan Boylan. A 5'10" guard who came out of Cardinal O'Hara High School and played one year at Division I Marist College, Boylan knocked down three three-pointers and scored a total of 11 points in the third quarter.

Red overwhelmed Purple in that period, 28-14, and rolled to a 71-51 victory. The two new Griffins, Boylan and Tamoun, each nailed five three's, Boylan finishing with 21 points and Tamoun with 17. Down low, sophomore Emily Chmiel had 11 points and Sekerak scored 10.

Facing Jefferson two nights later, Team Red managed little more than half of Tuesday's offensive output. Their 39-point total was due largely to poor shooting, even from under the basket. They were also missing Chmiel.

Team Black was up 12-7 at the quarter and then they maintained that advantage for a 26-21 lead at halftime. The scoring leader at this stage was actually incoming CHC freshman Avery White, who had nine points at the break while Jefferson got eight apiece from freshman Tori Nigro and junior Haley Meinel.

Late in the third quarter Team Black's lead reached double digits at 38-28, and the teams seesawed trough the remaining minutes for a nine-point final margin.

The freshmen on the two teams would end up as the scoring leaders, White with 13 points and Nigro with 12.

The DiLello sisters and their Orange outfit benefitted from a late addition to the summer sessions. Assigned to their squad was 6'3" Conestoga High School grad Ellie Mack, who just graduated from Division I Oregon State and thus was eligible to play in the league.

However, Orange still had a struggle on its hands against Holy Family's Columbia Blue, which won 76-51. Mack led Orange with 10 points, Charlotte DiLello scored seven, and Sarah DiLello had five.

Naessen's Kelly Green kept pace with league-leading Heather Maroon through much of the first quarter, but then the USciences alums began to pull away. They would lead by 11 at halftime, and came away with a 69-51 win as their outside shooters went largely unchallenged by the Kelly Green defense. The team high for Kelly, 14 points, was shared by Naessens and Swarthmore post player Dana Bandurick.

Team Sun, one of the draft teams with players from many different schools, managed to take down one of the Division II clubs, Kutztown's Team Pink. Sun won 56-47, with four points coming from former GA Patriot Priore.

Once a mansion, now a campus: an architectural history of Sugarloaf