Debuting screenwriter Diablo Cody won the Oscar for her screenplay's ear-tickling, smart-mouthed, stylized-but-honest dialogue, and the fine ensemble cast has a field day with it, especially Page as the shoot-from-the-lip teen and voiceover narrator. 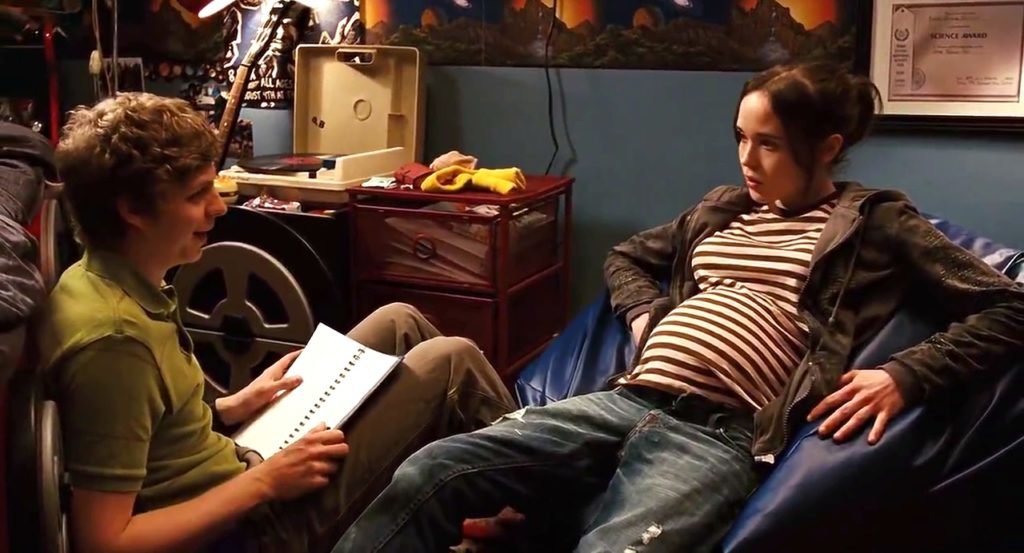 Text message to Ivan Reitman, the director of the fabulous “Thank You for Smoking”: thank you for also directing “Juno,” which was nominated for four Oscars, including Best Picture and Best Director, and won the prize for Best Original screenplay.

“Juno” (2007) is a witty, idiosyncratic, absolutely endearing comedy about a pregnant teenager who agrees to gives up her baby to a yuppie couple.  Ellen Page (now Elliot Page), who was also nominated for Best Actress, plays the bright, quirky 16-year-old from suburban Minnesota who has accidentally gotten herself pregnant after an ill-advised sexual experience--her first and only--with her geeky close friend, played by Michael Cera.

Initially, she considers an abortion, but after visiting a distasteful clinic, decides instead to give birth and put the baby up for adoption. That's how she comes upon an ad by a wealthy, infertile, McMansion-dwelling couple played by Jennifer Garner and Jason Bateman.

She informs her child's birth father of her plans, in essence rejecting him in the balance.  And she tells her understandably disappointed but impressively supportive father (J. K. Simmons) and stepmother (Allison Janney) of her condition, situation, and decision.

When she meets the couple, she commits her unborn child to them. But disturbing interaction with the perspective father of her child makes her question her decision.

Debuting screenwriter Diablo Cody won the Oscar for her screenplay's ear-tickling, smart-mouthed, stylized-but-honest dialogue, and the fine ensemble cast has a field day with it, especially Page as the shoot-from-the-lip teen and voiceover narrator.

“Juno” is charming, disarming, but not at all alarming. Oh, it has its cynical side. But it's also got oodles of heart, trouble, and pain, even if it disguises them under a protective layer of snarky one-liners--just as Juno does.

This is a fresh, funny, and flavorful comedy that's also bittersweet and unexpectedly touching.

Juno what? This is a terrific movie.