“We have decided that the time has come to end our long run of directing and performing with Piffaro at the end of the 2021-2022 concert.” With those words, Joan Kimball and Robert Wiemken announced their retirement as co-directors of Philadelphia’s internationally acclaimed Renaissance Band, Piffaro. 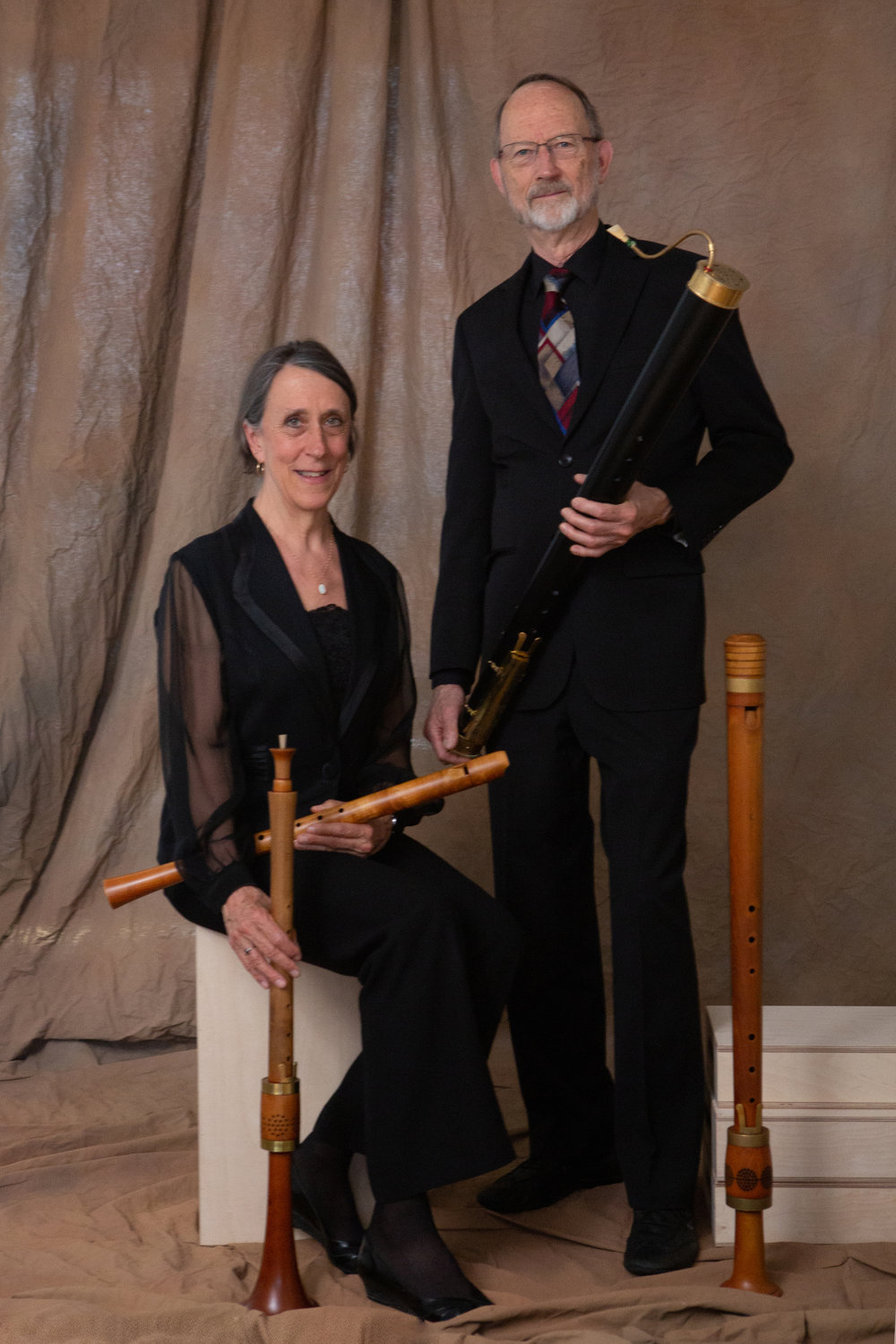 Joan Kimball and Robert Wiemken weren’t thinking about retirement as co-directors until the William Penn Foundation asked about their plan for succession. (Photo by Bill DiCecca)
Posted Friday, August 6, 2021 9:00 am
by Michael Caruso

“We have decided that the time has come to end our long run of directing and performing with Piffaro at the end of the 2021-2022 concert.” With those words, Joan Kimball and Robert Wiemken announced their retirement as co-directors of Philadelphia’s internationally acclaimed Renaissance Band, Piffaro.

Continuing, they said, “We want to pursue other avenues of interest and other adventures in the years to come, and so will turn over the reins of leadership of the ensemble to current member, Priscilla Herreid.”

I had the chance to sit down with Joan and Bob earlier in the summer at the Mary Louise Curtis Branch of Settlement Music School, where Piffaro has rehearsed for many years. I wrote my first review of a Piffaro concert back in 1984 – a positive write-up, I hasten to add – so I was eager to know a little bit more about how and why their decision had been made.

First on the docket, however, was their gratitude for the support Piffaro has continued to receive from its donors and patrons during the COVID-19 pandemic lockdown. While many ensembles have struggled through and even succumbed to the cancellation of “live” performances, Piffaro successfully substituted excellently received “virtual” concerts throughout the 2020-2021 season.

“The support we received was phenomenal,” Bob said. “We added more than 200 donors to our list of patrons as a direct result of our online performances.”

“Our ‘virtual’ concerts brought Piffaro to a new ‘online audience’ all over the world,” Joan added.

As a direct result of this expanded worldwide audience, Piffaro has been able to announce a 2021-2022 season of “in-person” concerts that will also become available online. The “in-person” season will include a return to concerts performed in the Presbyterian Church of Chestnut Hill, one of Piffaro’s longtime “home venues.”

Piffaro’s history began in the 1970s when Joan was a member of the University of Pennsylvania’s early music collegium with former Chestnut Hiller Mary Anne Ballard.

“By 1980 or so,” Joan explained, “those of us who played wind instruments thought that we’d like to begin offering our own recitals, so in 1984 we presented our first concert series as a Renaissance instruments wind band. When we started, we had no idea where we would end up!”

Bob was working on his doctorate at Penn during the late 1970s when he became interested in Renaissance wind instruments through playing the recorder. He auditioned to perform with the collegium, became a part of the ensemble of wind players within the group, and then Piffaro when it broke off on its own. European concerts and recording contracts followed with dizzying speed, transforming Piffaro from a local band into an internationally acclaimed ensemble.

“Then in the late 1990s,” Joan continued, “DGG (the German recording company) changed hands. They were no longer supporting ensembles like Piffaro with tours and albums. Fortunately, Dorian Records stepped in for our performances and recording of Kyle Smith’s ‘Vespers,’ and that set us off on another series of concerts and festivals and CDs.”

Both Joan and Bob explained that their first thoughts of retirement came when they were asked in 2016 by the William Penn Foundation (a generous supporter of many local groups) to provide a plan for succession. Neither considered retiring at that time, but the question caused them to think about it in the future. Upon further consideration, the end of the 2021-2022 season seemed reasonable and, so, was chosen.

“Since the time when we founded Piffaro,” Joan said, “the level of skill of performers on Renaissance wind instruments has increased exponentially. Both Bob and I feel that now’s the time for us to step back, focus on teaching and running workshops, and giving the next generation the chance to take over.”

As a fitting culminating honor for both Joan Kimball and Robert Wiemken, Early Music America named both musicians as recipients of the 2021 Howard Mayer Brown Award for lifetime achievement in the field of early music. The award is named in memory of the University of Chicago’s musicologist whose scholarship covered a wide range of subjects on the music of the Renaissance. They were nominated by fellow members of Piffaro.

Remarked Kris Rudzinski, director of the MLC Branch of Settlement Music School, “Settlement would like to congratulate Joan and Bob on their impending retirement as co-directors of Piffaro at the end of the 2021-2022 season. Settlement has been proud to serve as a longtime community partner of Piffaro, providing support by making our spaces available for rehearsals.”