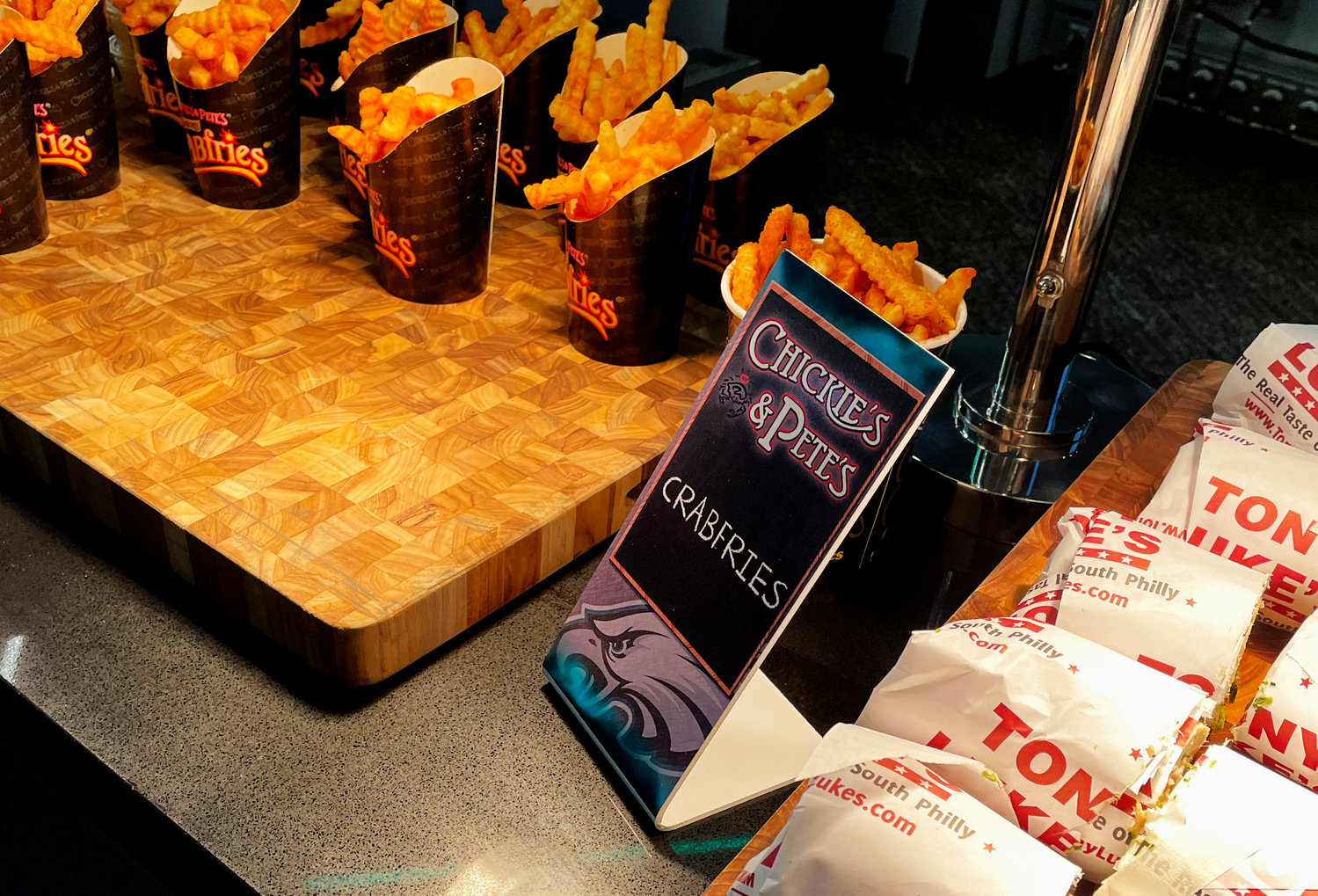 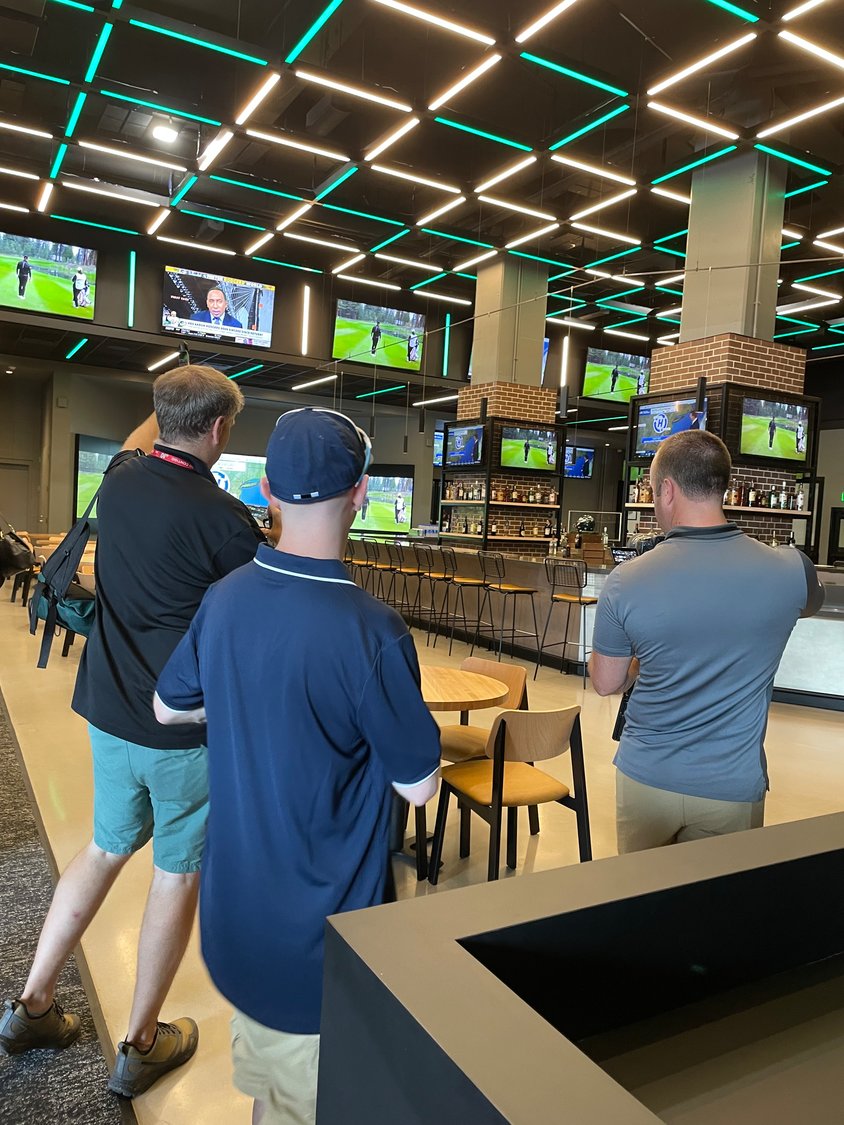 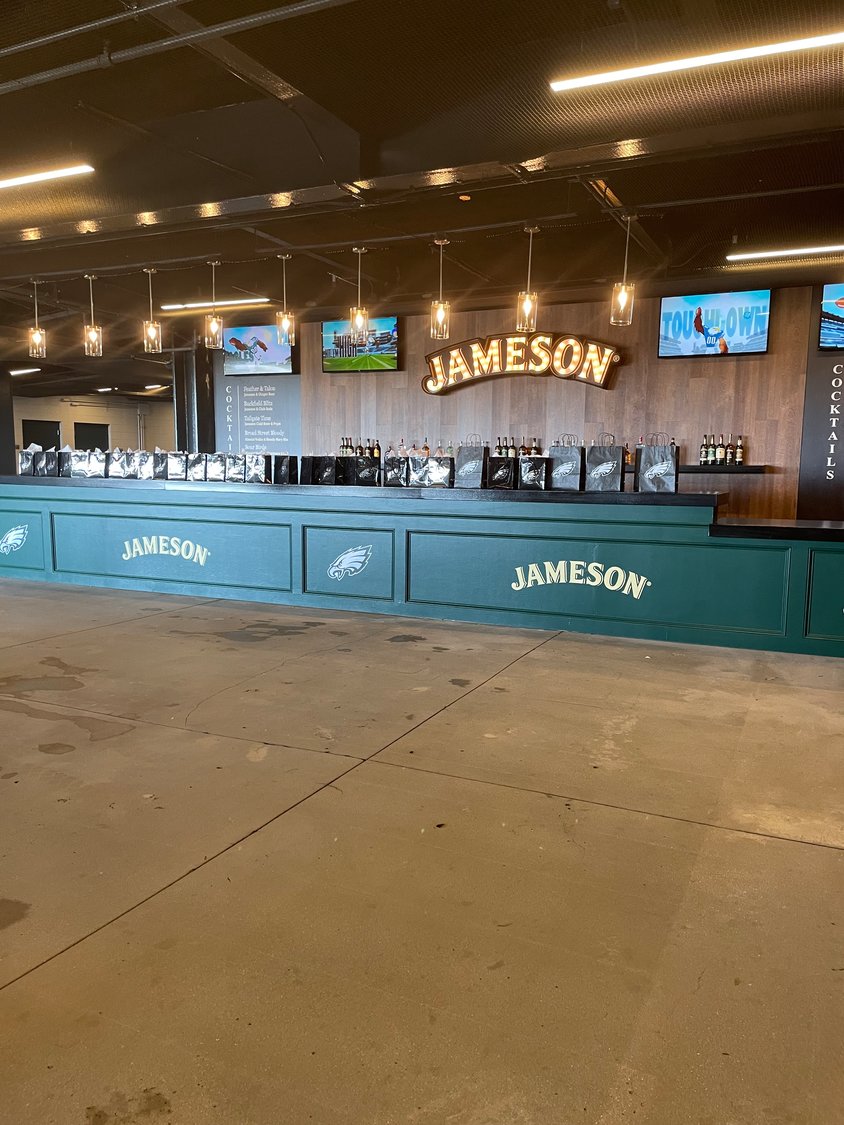 The new “Jameson” bar on the first concourse features creative cocktails like the “Backfield Blitz,” a Jameson and club soda, and the “Sour Birds,” an Absolut vodka and cranberry special. “Tailgate Time” may end up being the most popular, a mix of Jameson Cold Brew Irish Whiskey and Pepsi. 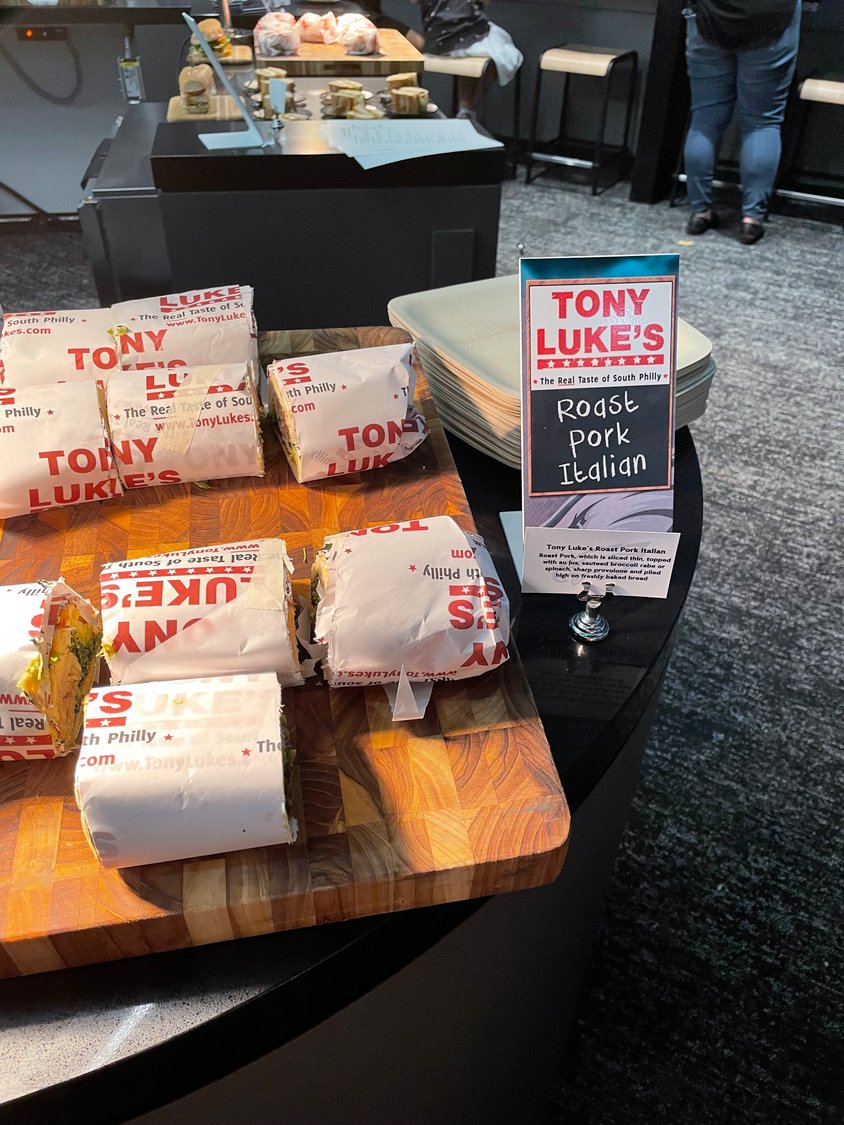 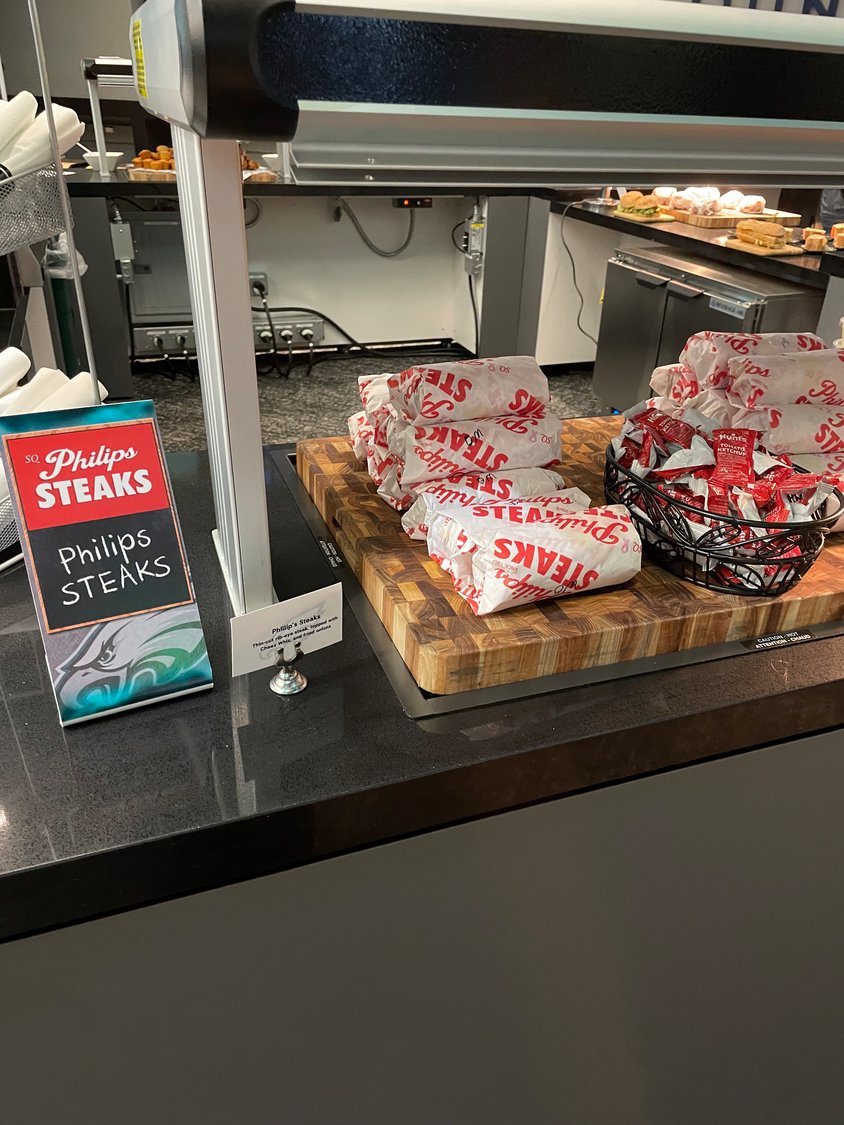 Eagle’s games are finally back, and if you are headed to the stadium, bring your appetite for some of the new foods featured in the line-up. Here’s a look at the full concessions roster inside the stadium:

Popcorn for the People

The Eagles returned this past week for their first preseason home games, playing the Steelers last Thursday Aug. 12, and facing off with the Patriots Aug. 19. The games will welcome some of the largest crowds the stadium has seen since pre Covid days. With mask guidelines and sanitation regulations in place, one could argue that Lincoln Financial Field is almost back to business as usual.

Last week, I toured the stadium ahead of time to learn about all the new concessions and bar items the team will be featuring this season, and the choices seem to be more local and diverse than ever. I walked a tour that began at the new “Jameson” whiskey bar on the lower concourse, diverted onto the field to see the new DraftKings VIP seating section, and ended in the 4,000-square-foot members-only Fox Bet Lounge beside the owner and team entrance.

The last stop was worth the wait. At the Fox Bet lounge, all the new concession foods offered this season were on full display – and ready for sampling. Now more than ever, as a way to welcome back fans after a strange 2020 season, the organization is making an effort to seek out local places and to appeal to fans’ palates.

While McNally’s Schmitter sandwich is still on the menu, and has been for a few seasons, they’ve added places like Philly’s Love & Honey Fried Chicken, and pierogies from The Pierogie Place, a favorite at Wildwood and the Shore. They also snuck in some Philips cheesesteaks, another Philly favorite with its thin-cut rib eye and Cheez Whiz.

“We like to listen to fans,” said Aramark’s stadium general manager Al Austin. “They like local, and they want stuff they like to eat. We reached out to a lot of local up-and-comings. We took this year as a welcome-back to the fans.”

And fans will be welcomed with a full spread of new foods. The staples are still there, like John’s Roast Pork and Chickie’s & Pete’s crab fries, but fans’ appetites can also now contend with grilled Korean chicken sandwiches, potato and cheese or bacon and jalapeño  pierogies, plus the Philips cheesesteaks and Love & Honey’s fried buttermilk chicken tenders with special honey butter cornbread.

The Korean grilled chicken sandwich is an in-house Aramark creation, which may just appeal to all those folks who’ve been cooking up some far-flung, exotic foods this year at home. Slathered in cole slaw and served on a sweet roll, I can attest it’s a winner.

“Each year, we look for a new sandwich,” Austin said.

The stadium also debuted the “Jameson” bar on the first concourse, which features creative cocktails like the “Backfield Blitz,” a Jameson and club soda, and the “Sour Birds,” an Absolut vodka and cranberry special. I think “Tailgate Time” may end up being the most popular, a mix of Jameson Cold Brew Irish Whiskey and Pepsi. Pepsi, incidentally, is the new sponsor featured in the revamped welcome lobby and plaza “fan zone” of the stadium.

But one of the most exciting additions to the stadium’s new drink roster is a duo of craft brews from Two Locals Brewing Co. The West Philly brewing company, the first black-owned brewing company run by brothers Richard and Mengistu Koilor, will have an IPA and a wheat beer featured in the stadium.

The team found the Two Locals in a recent article in the Philadelphia Inquirer, which featured the craft brew brothers’ story. The two began brewing at home in 2016 and the operation grew from its grassroots beginnings by word-of-mouth. Austin and company were wowed by the duo and approached them to see if they’d be willing to provide brews on game days.

“We want to give craft beer that local flair,” Austin said. “They [the Koilors] are passionate about beer and food and they are Eagles fans.”

Becoming a part of the gustatory lineup is not as difficult for mom-and-pop businesses as one would imagine. The organization says it is very open to working with local food companies if they are willing to commit to serving up their fare at all the games.