The Mounties scored first, but over the course of the match PC's Darcy Felter, a senior midfielder who has signed with the University of North Carolina, stacked up a game-high eight goals. By halftime the Quakers were leading 9-3, and they went on to win, 17-6. 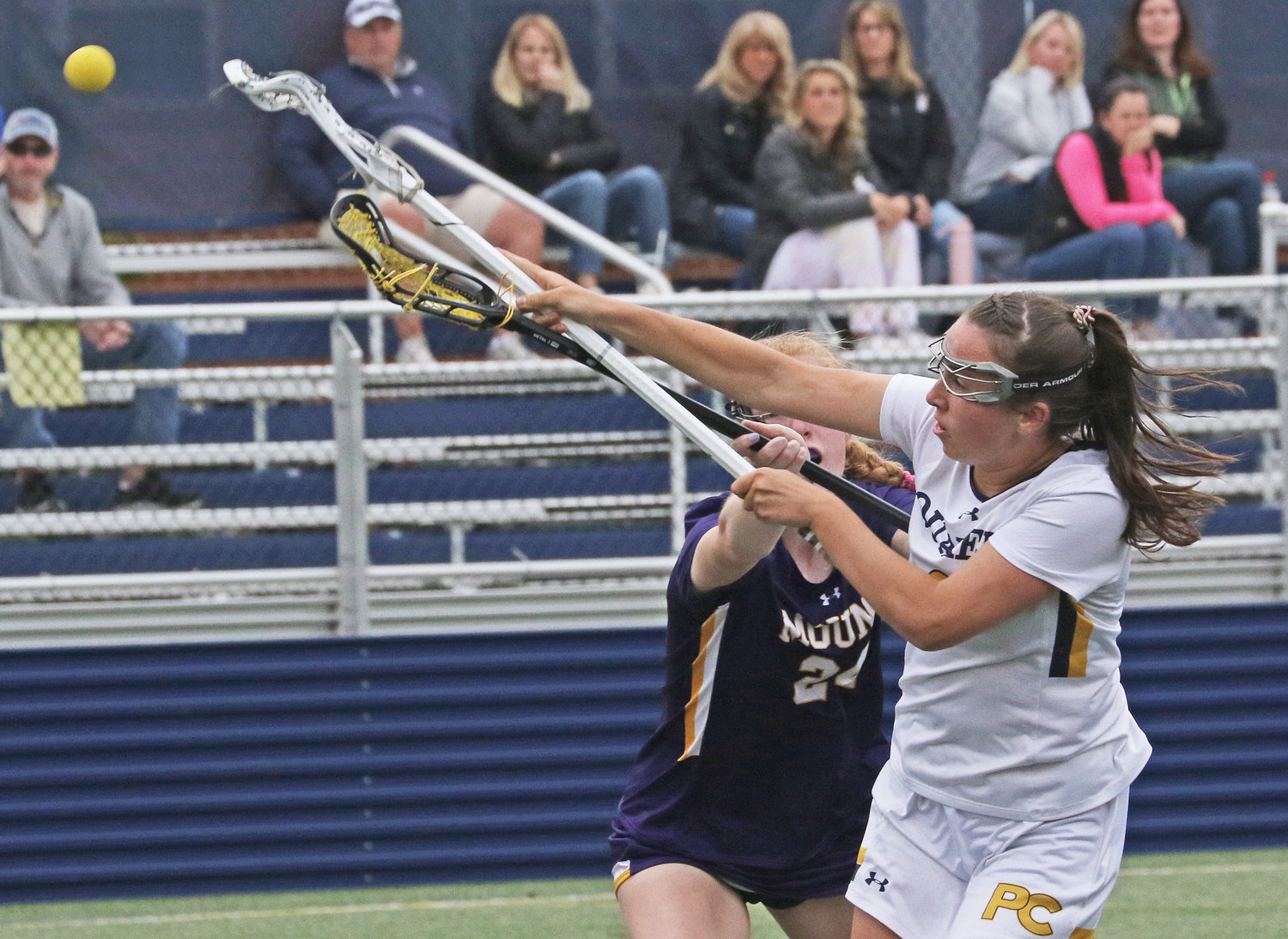 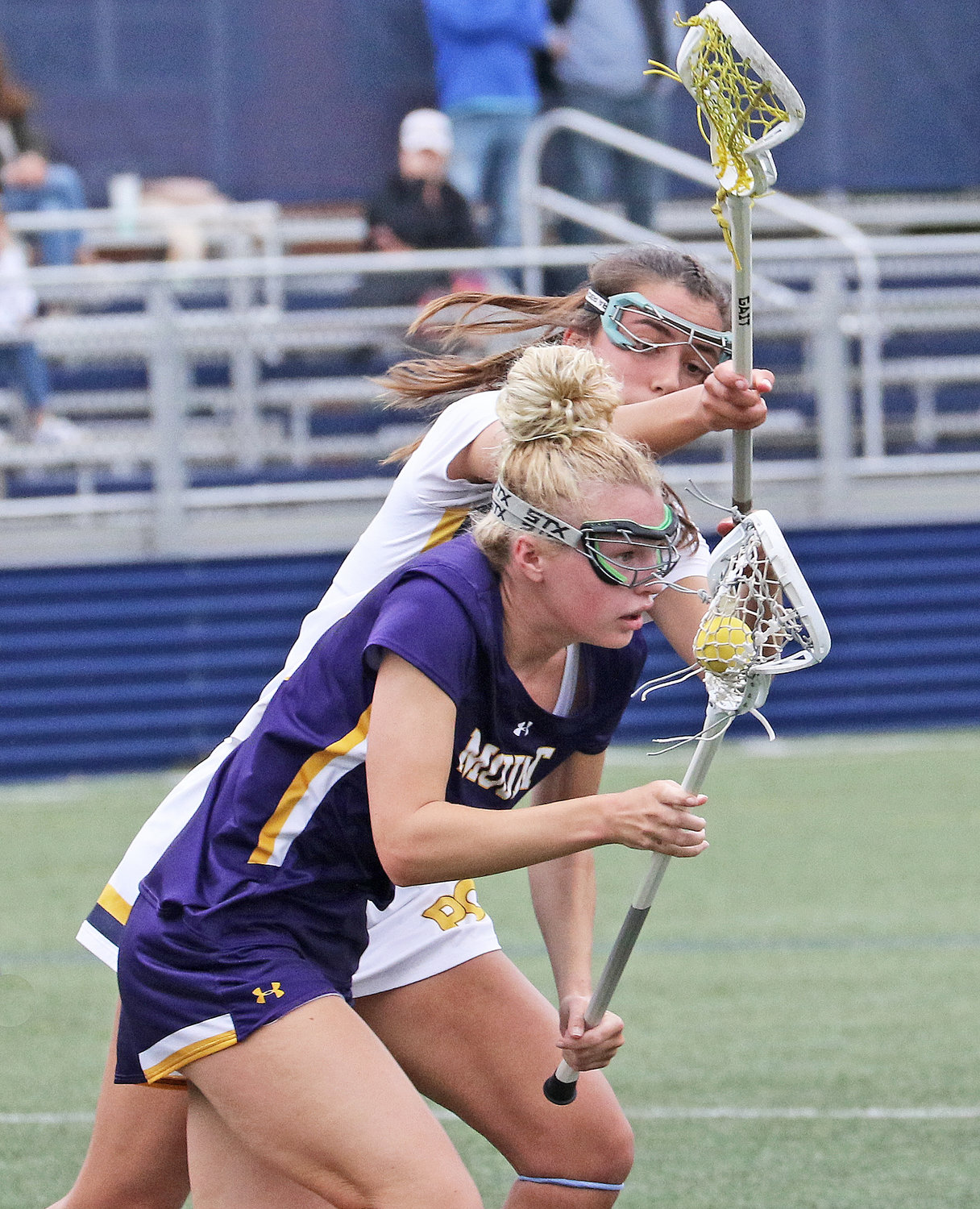 Undefeated leaders in Athletic Association of Catholic Academies lacrosse, the Mount St. Joseph Magic took on a formidable non-league foe last Saturday, which would come to be known as Darcy Day.

The Mounties scored first, but over the course of the match PC's Darcy Felter, a senior midfielder who has signed with the University of North Carolina, stacked up a game-high eight goals. By halftime the Quakers were leading 9-3, and they went on to win, 17-6.

The Magic remained 4-0 within the AACA, and were 6-1 overall.

Penn Charter came away 12-2 overall and stayed at 4-2 within the Inter-Ac League. The Quakers' two losses had come in early April, in the second and third matches of the league schedule.

Head coach Colleen Kelly felt that PC's 12-9 loss to Springside Chestnut Hill Academy was more disturbing than the subsequent 11-10 setback in the Episcopal Academy game, in which the teams raced neck-and-neck down to the last possession. Still, the defending champs had slipped to 1-2.

"We had some things not going our way," said Kelly, who noted that the team refocused after that. "It started to click for us. We're playing at a fast pace, and we're paying attention to the little details."

In the middle of the month, the Quakers rebounded with non-league wins over Manheim Township and Garnet Valley, and won convincingly in Inter-Ac matches with Notre Dame and Baldwin. Last Thursday, Penn Charter faced Agnes Irwin for the first time since the Owls defeated the Quakers in the 2021 postseason Inter-Ac tournament.

After the teams paced one another through the first half, PC pulled away in the second period to triumph, 11-6. Different players are able to assume the starring role on attack for the Quakers; here it was senior Maddie Shoup scoring five goals, while Felter fired two. There were single strikes by junior Gracie Shoup (Maddie's sister), seniors Charlotte Hodgson and Lane Murray, and junior Bea Buckley, while junior goalie Kayla Joyce made seven saves.

"Our middie lines have been strong," Coach Kelly stated. "Bea Buckley has been really good, and Lane Murray's been very consistent. Our ride has been working well, in the Irwin game and again today with the Mount. With Agnes Irwin I think a lot of the play was pretty even, but we were consistent and came up with a few more stops and a few more draws.

"Defense as a unit's been doing great," Kelly continued. "Grace Turner [a highly-experienced senior] is really stepping up as a leader back there. Lauren Anderson [a senior], one of our soccer players, does really well in our transition. Ella Curci [a senior] is coming up with ground balls and caused turnovers, and Nora Maione is seeing a bunch of time as a sophomore. And, of course, Kayla is phenomenal in goal."

Seniors Felter, Hodgson, Turner, and Maddie Shoup have made major contributions to Penn Charter's success in recent years, and now Kelly is encouraging them to use their voices a little more.

"They're such unselfish leaders by example that they've never had to vocally rally our team," the PC skipper related. "That's something I've been working on with them. It's not really in their personality, so I need to get them a little out of their comfort zone."

In last Saturday's game, Mount sophomore Maggie Rezza controlled the opening draw, then PC's Joyce turned aside the first shot by the Magic. At the other end, there were close misses by PC junior Alex Glomb and Maddie Shoup. The Quakers got both rebounds, but a PC pass was knocked down by MSJ junior Kat Zampirri and the Mount got possession.

This led to the game's first goal, with sophomore Amelia Clair scoring from close range off a pass from senior Lauren Maher with 3:51 elapsed. Hodgson, a Norwood Fontbonne Academy graduate, quickly tied it up for Penn Charter, but with 18:10 remaining in the first half, Clair reached high to pocket a lob into the middle and scored. That would be the Magic's last lead.

Before and after the second MSJ goal, PC shooters had been snuffed by Mount junior goalie Annie Shields. Before long, it dawned on the Charter attackers that they weren't likely to beat the seasoned keeper with a single dodge or fake. They began to move the ball rapidly around the goal, laterally and front-to-back.

Felter's first goal made it 2-2, the PC took the lead for good with 12:55 on the clock, when Murray assisted on a goal by Quakers sophomore Grace Walter.

Four more goals by the hosts came fairly quickly, making it 7-2 before Clair completed a hat trick for the Magic with a little under eight minutes remaining. With around three minutes left, an apparent fourth goal for the Magic was nixed by a crease violation.

Things went downhill from there for the visitors, as a non-releasable penalty against the Mount in the final minute bore a heavy cost. With 35 seconds to go, Charter's Walter passed the ball from behind the cage to set up a goal by Hodgson, then Walter earned another assist when she fed Felter for a quick-stick shot with 17 seconds to go.

At the start of the second half the Mount needed to starting digging out of this 9-3 hole right away; instead, the pit grew irremediably deeper. In the third minute, Felter scored twice in a 14-second span, the first time on a behind-the-back shot at the left edge of the crease. PC would go up 15-3 before the Magic scored their first goal of the half in the middle of the period. The Quakers cruised to victory.

Coming after Felter in the PC scoring stats were Hodgson, with a hat trick, Murray, with two goals, and Buckley, Walter, and Gracie and Maddie Shoup, with one apiece. Joyce made three saves in the Quakers' cage before she was replaced late in the game by sophomore Toni Plunkett, who made two stops.

Supplementing Clair's hat trick for the Mount were single strikes by Norwood grad Devin Loome (a junior), and by Maher and junior Kiersten Pumilia.

Penn Charter heads into the second round of Inter-Ac matches tied in the loss column with Agnes Irwin (each team has two), while Springside Chestnut Hill and Episcopal are both 5-1.

For now, the Mount rules the AACA, but huge variations in the strength of the league teams can be unsettling. For example, just two days before taking on Penn Charter, the Magic had won a league match over Villa Joseph Marie by a score of 19-3.

Overall, though, the Magic are having a successful season under new head coach Becky Cartee-Haring. Their 4-0 mark in their league has not come without some challenges. In their closest AACA bout, the Mounties overcame Villa Maria in a low-scoring affair, 6-5.

The first-year Mount mentor said she introduced new elements in her coaching approached that agreed with the players.

"It was a good fit," Cartee-Haring said. "They're an impressive group in more than just their athletic abilities. They were willing to trust new ideas, they're smart, and they already had good stick skills."

It took the Mounties a while to adapt to the up-tempo style of play favored by their new leader.

"I like a fast-paced attack and a high-pressure defense," the coach noted, "and they had been used to settling the ball and then running set plays. We have a few set plays, but I prefer a motion offense that gives more players a chance to contribute. Once they got used to it, they liked the idea of more shared responsibility."

The leading attackers are Maher, juniors Loome and Kate Donovan, Clair, and assist leader Ava Rossi, a junior. Rezza, an impact player last year as a freshman defender, had been moved up the field to contribute to the transition and the attack. She also has taken a lot of center draws while senior mainstay Campbell Donovan (out of NFA) recovered from an early-season injury.

Cartee-Haring had a known quantity in goal with junior standout Shields, who has been committed to the University of Southern California for some time (former Springside Chestnut Hill keeper Delaney Sweitzer played there for two seasons before transferring to Syracuse this year).

"All-around, Annie's our most consistent player," the coach said. "She never gets frazzled; she has a great ability to just reset when she gives up a goal. She's coming up on 250 career saves now."

Senior Sarah Hughes is a defensive stalwart along with sophomore Quinn Shields (Annie's sister) and Zampirri, the junior. Cartee-Haring observed that junior Molly Brennan's speed makes her a good one-on-one marker, and freshman Meghan Holmes brings good size and a high lacrosse IQ to the defense.

The Mount returns to league play this week with a Tuesday meeting with Merion Mercy, followed by the important rematch with Villa Maria Thursday on the road.