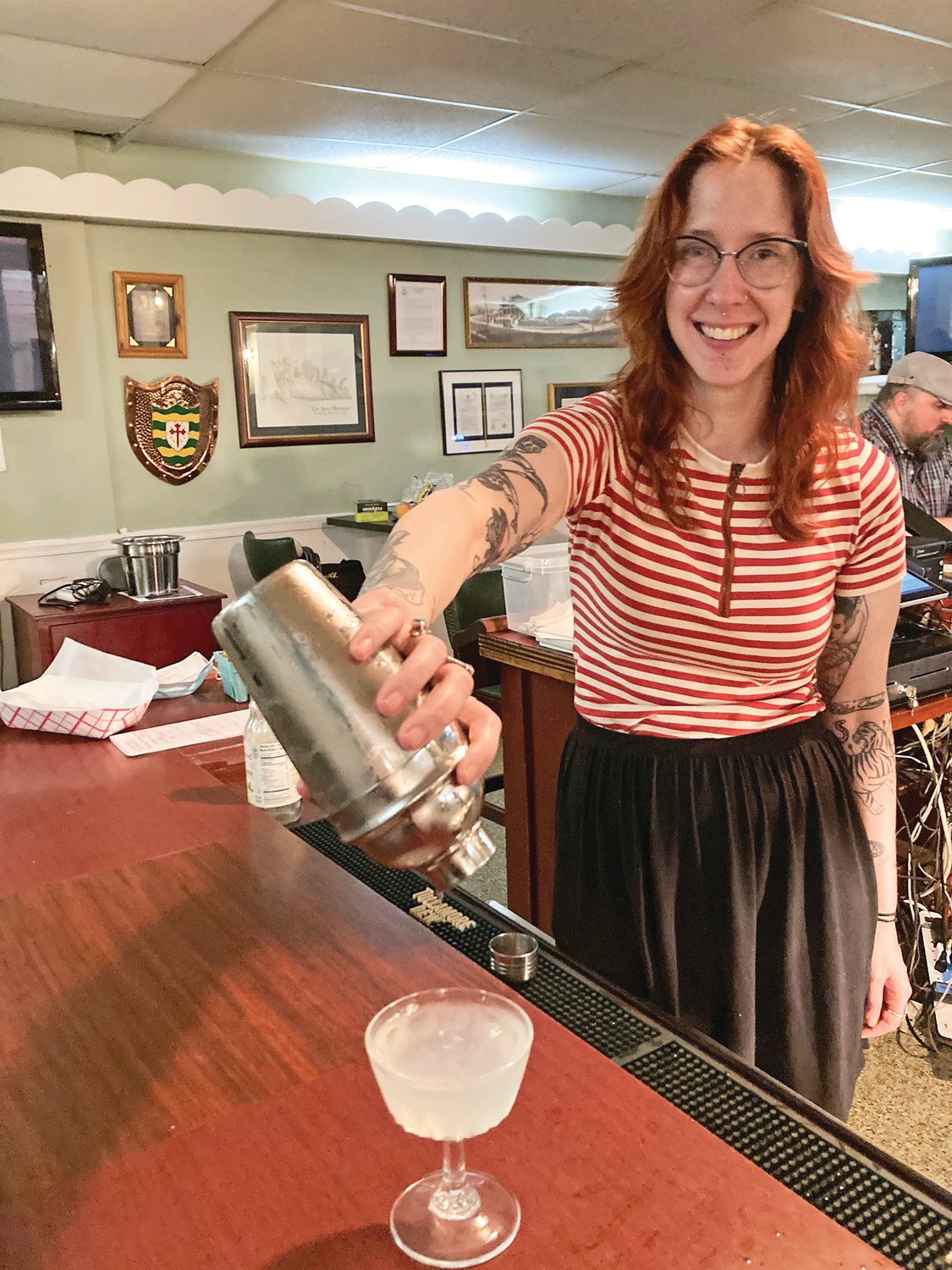 Liz Schlatter, who went from a career in science to a career behind the bar, is teaching upcoming classes in cocktail creation for Mt. Airy Learning Tree.
Posted Thursday, October 6, 2022 12:00 am
by Len Lear

I don't think Liz Schlatter would be offended if you asked her that. Schlatter, who will be teaching The Art of Classic Mixology on Oct. 10 and The Science of Nouveau Mixology on Nov. 7, both at the Commodore Barry Irish Center in West Mt. Airy for Mt. Airy Learning Tree, almost certainly has to be the country's only full-time bartender with a college degree in microbiology.

Schlatter, who was a bartender for The Blue Comet Bar & Grill in Glenside until it closed during the pandemic, is currently mixing drinks for the Commodore Barry Irish Center on Thursdays for Jazz Night and the rest of the week at Bourbon & Branch in Northern Liberties.

But this native of lower Bucks County earned her microbiology degree at the University of the Sciences in West Philadelphia (which has since merged with St. Joseph's University) and a master's degree in forensic science from Arcadia University in Glenside with a focus on toxicology, biology and chemistry. She then worked on and off in laboratory positions, the last one for Charles River Laboratories in Malvern until 2019.

Why does one leave a career in science after all those years of study, research and effort to mix bourbon with ginger ale and bitters or rum with club soda and lime juice?

“I started working in restaurants to put myself through school,” Schlatter answered. “I worked most front-of-the-house positions in a restaurant before I began bartending and fell in love with the craft.

“Bartending is unlike any other career path. It’s a great way to meet new people while allowing creativity,” she continued. “The industry is constantly changing, and there are always new things to learn. No day behind the bar is the same, but it’s a hell of a good time. There’s also something very rewarding in providing fun and excitement for other people.”

In Schlatter's ‘Classic Mixology class, students will learn to create about a dozen elixirs that have stood the test of time – including the Manhattan, the Sazerac, the sidecar and the martini. You will also learn some entertaining history of each cocktail.

In the Nouveau Mixology class, you will learn how to make syrups and shrubs, how to incorporate herbs and spices into your drinks and how to create your own unique signature cocktail.

What is the difference between an amateur like me who likes to experiment with mixed drinks and a professional like Schlatter?

“While home bartenders and many professional bartenders both like experimenting with mixing drinks,” Schlatter said, “the main difference between the two is volume. Most of the time the bartender or bar team is making drinks for the bar and the entire dining room.

“We’re not often making one drink at a time, but making multiple different drinks as efficiently and consistently as possible. A busy service is an insane amount of multi-tasking. You have to be planning your next 15 tasks while new tasks are coming at you, all while keeping your cool. You have to be able to think on your feet, pivot and do a surprising amount of quick math.”

What does Schlatter like least about bartending? “Working any position in a restaurant is an extremely physical job,” she replied. “You’re constantly standing, lifting, turning, moving in small ways. The work itself is demanding and coupled with the late hours can be exhausting.”

When asked about the biggest tip she ever got, Schlatter chose to be discreet. “All I can say to that is people can be very generous, especially if you show them kindness,” she said.

Is personality just as important as mixing drinks?

“Honestly,” Schlatter said, “I think personality is more important. I think there's more to a great bartender than making drinks. People use a bar as much more than a pit stop for a drink, whether that’s to be social, meet new people, celebrate or decompress. A bar is a delicate ecosystem, and as a bartender you are responsible for creating a welcoming environment. It’s like hosting people in your own home. Being hospitable and inviting is vital and often the first thing people notice.”

For more information about Schlatter's classes, call 215-843-6333 or visit mtairylearningtree.org. Len Lear can be reached at lenlear@chestnuthilllocal.com