The story of how Holly Spofford left teaching to become a novelist would itself make a pretty good short story at least. Holly, who grew up in Flourtown and attended Plymouth Whitemarsh High School … 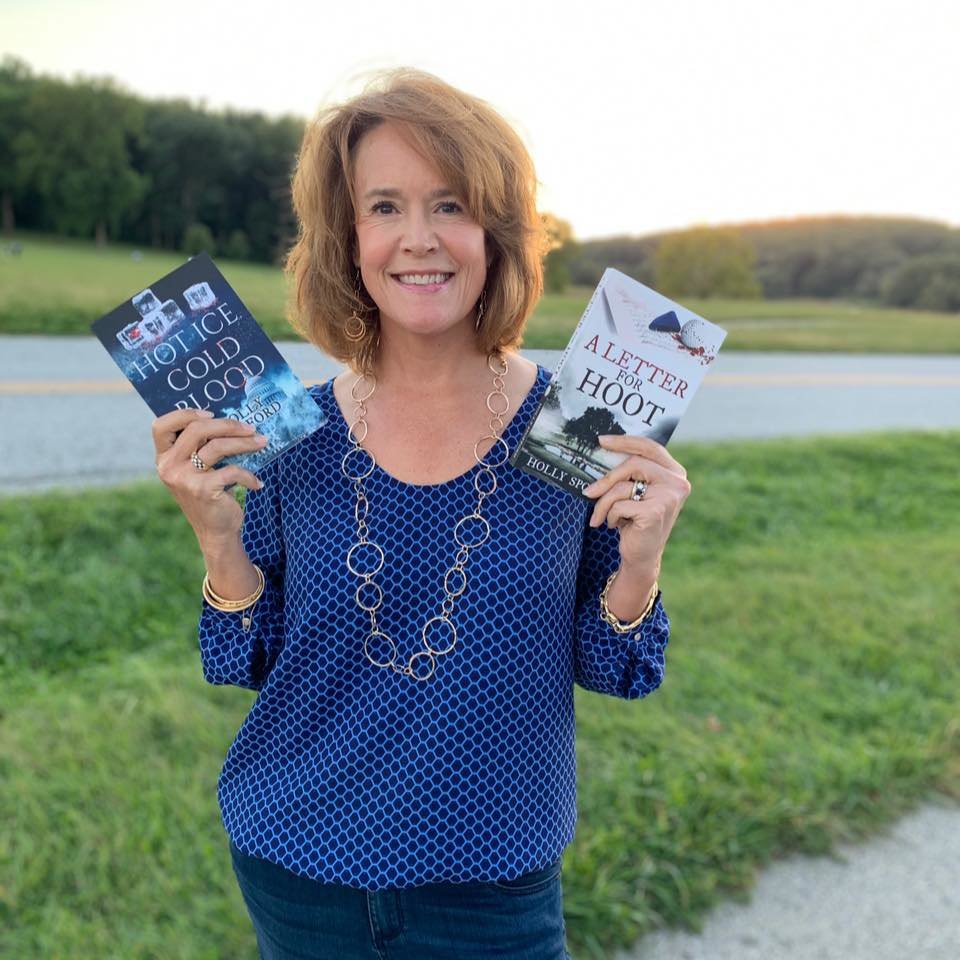 Crime writer Holly Spofford holds up her first two mystery thrillers in a trilogy. Her third book will be out in March or April.
Posted Thursday, December 30, 2021 6:00 am
by Len Lear

The story of how Holly Spofford left teaching to become a novelist would itself make a pretty good short story at least. Holly, who grew up in Flourtown and attended Plymouth Whitemarsh High School (“My parents moved from Fort Washington to Flourtown when I was 5 in 1973”), loved to set up classrooms and play school as a child. Her stuffed animals and dolls were her students. However, she admits she was “not a great student,” but she did manage to graduate from Hollins University, a small school in Roanoke, VA, in 1990.

A lifelong athlete who still works out vigorously, Spofford was an outstanding tennis and lacrosse player in high school and college, so it was a natural progression that she wound up coaching for 25 years - girls lacrosse and field hockey at Penn Charter and Springside, golf and squash for Chestnut Hill Academy middle school students.

In the mid-1990s Spofford also went back to Cabrini College in Radnor and earned a teaching certificate. “I became a much better student,” she recalled. “I had almost a 4.0 average. My dad said I had to pay for grad school myself, and I discovered that when you are paying your own money for tuition, it motivates you.”

The Flourtown native wound up teaching English for 17 years in local private schools - fourth and fifth grades at Episcopal Academy from 1996 to 2003, then a year off to care for her ailing mom, Molly, and then sixth and seventh grade boys at CHA from 2004 to 2014.

“I showed kids Agatha Christie movies like 'Evil Under the Sun,'” she said. “Then I had the boys write their own murder mysteries. The kids were always picking teachers as the murder victims in their stories. In one of their stories, I was found dead in a sand trap. I worked so hard at this, and they loved it.

“I loved teaching so much, but I had to listen to the voices inside me, which were telling me to be a writer. I had to tell my 32 boys that I was leaving. My heart was in my throat. The tears started to flow. I told them, 'I love you, but I have to write that mystery.' I was crying, and they were crying. While we were all crying, one kid jumped up and said, 'This is an April Fool's joke!' I did not even realize it was the first of April  until he said that. So I had to tell them it was no April Fool's joke. It was real!

“I loved teaching, but I have not missed it. It was very tough leaving, but knowing myself, I could not teach and write at the same time and do both well. I have to be all in. I have written two books so far, and the third  book of the trilogy will be out in March or April. I love to create characters and dialogue. I kept diaries from 8 to 25, and I find now that some of it is hilarious. I always loved having a pen in my hand.”

Spofford's husband John, a retired math teacher and now ghost writer, has three children from a previous marriage. And he is an equally avid golfer. One item on their bucket list is to play golf in all 50 states. So far, they have teed it up in 19 of them. Holly can also occasionally be seen riding in the rumble seat of her father’s antique LaSalle, usually on her way to play golf.

“I grew up with the Wissahickon Creek right behind our house,” said Spofford. “I was fortunate to grow up there. It is in my DNA. I was taught to swim at the Philadelphia Cricket Club, and I still love to swim and work out with weights and machines at L.A. Fitness in King of Prussia. It helps the thought process.”

On Nov. 26, “Black Friday,” Spofford appeared at Booked, a new Chestnut Hill bookstore. “It was fantastic,” she said. “I sold 25 books. People love to talk to the author … You don't know what goes into writing a novel until you do it. I go over and over and over sentences and paragraphs. You can always find better adjectives, verbs, etc. And I have an editor who will generate a 13-page critique of my work, and I will redo it. My heart rate is up, and my stomach is turning. My characters are my family. They are with me all the time. Writing is difficult but also rewarding. I drive myself insane sometimes with it.”

Spofford's second book, “Hot Ice, Cold Blood,” is not for the faint of heart. There is some really nasty stuff in it, but it is definitely a page-turner. For more information, visit hollyspofford.com. Len Lear can be reached at lenlear@chestnuthilllocal.com