After six weeks of searching, the Local caught up last week with Chestnut Hill Local columnist and author Hugh Gilmore at the BB&T bank's brick driveway. 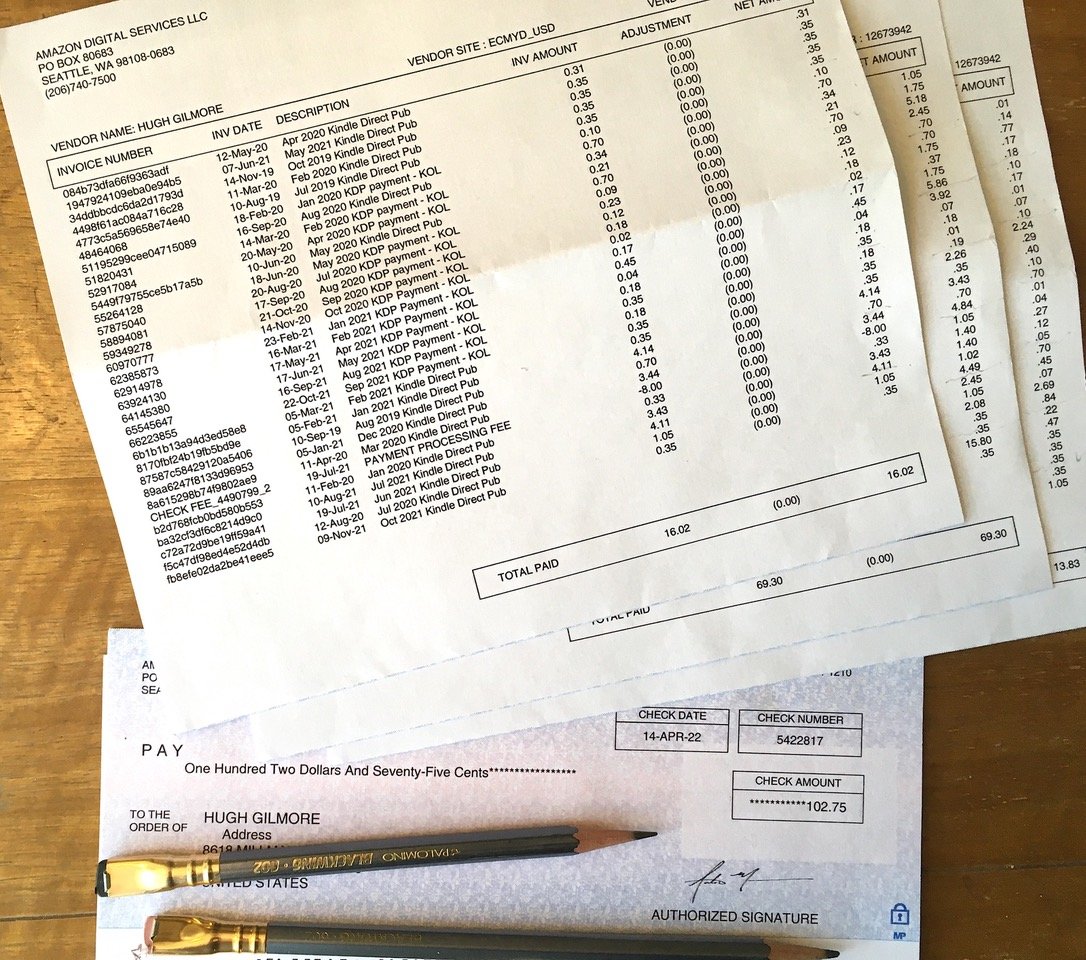 After six weeks of searching, the Local caught up last week with Chestnut Hill Local columnist and author Hugh Gilmore at the BB&T bank's brick driveway. Wearing gray sweats, he'd just exited his CRV to stand near its rear fender examining a piece of paper when we hailed him.

He turned and walked over, kissing for show what turned out to be a check. Getting closer, he laughed and said, "Look...I'm rich!"

He held a business check from Amazon Digital Services LLC, of Seattle, Wash., drawn on the Wells Fargo Bank of Van Wert, Ohio, made out to his name for $102.75.

Before we could ask, he pulled his Phillies cap down against the sun, and said, "It's for my writing. They finally paid me for some books I sold through them. It feels great." He kissed the check again, saying, "I even feel proud."

We asked if he had many books online with Amazon.

"It's hard to say what 'many' means, given the internet. Some folks have plenty more. I've published four paperbacks and six ebooks."

Asked if it took long to write that much, he looked skyward and thought a minute, then down again, to say, "Yes and no. ‘The Kindles,’ maybe a month each, but they were based on some series I'd written for the Local. The others, three novels and a memoir, took around two years each. They're still not done, but I kicked them out the door to get on with the next one."

Kicked them out the door?

"Yeah, published them. I'm not a perfectionist. I try to get my characters breathing strongly enough to tell their stories and move on."

Were his books self-published?

"'Self-published' is the kiss of death in this world. Well, used to be. People would say that term with contempt. I used to get dispirited by that put-down, but I got over it. I spent a lot of time and effort trying to find an agent, who'd find me a publisher. That went almost somewhere, but wound up nowhere. I decided I'd rather publish some books on my own than go around begging the world to."

Is self-publishing a faster way?

"It's called 'independent publishing' nowadays. And yes, it's faster. If you have your word doc ready, and a self-designed cover, you can have your printed book in hand within a week or two."

"Then the real work begins. The marketing. The advertising. The push. The constant self-promoting. I hate it. I haven't done any for years."

Actually, here at the Local we were thinking of doing a...

Actually, yes. Could we write up this conversation? We're always looking for stories about local authors.

"Oh, yeah, the 'news' being my check, I guess. My big check. It's stupidly small, but I'm stupidly proud of it anyway, though your readers will think I'm even stupider if they learn something else about my check."

Why were the royalties so low?

"You can set your own prices, within certain parameters. And you can set your royalty rate – either 35 or 70 percent, each with its own disadvantages."

Still, why were the returns so low?

"I priced them low. I did it to get readers. As an author, I was, and remain, a nobody to the world beyond my fence gate. So, maybe a good blurb and book cover and cheap price would get me some readers. This is not my first check from Amazon, by the way. I'd had two others. I chose to be paid by check whenever my royalties reached $100. So, that's three checks for about $100 each. That took about nine years. My ten titles each made about $10 dollars a year. I pay taxes on them too."

Gilmore seemed ready to go into the bank, so we asked again if we could do a writeup about this chance meeting.

"Okay. But not for me. There are a lot of wanna-be writers in our community and I want to encourage them to just keep writing what they have to say. Whether your results are big or small, getting a book done is a big satisfaction. You did it. Nobody gave it to you. And the feeling you get when you hold your book in your hand is priceless. And, if you're lucky, some people will buy and actually read your book. And if anyone ever says anything appreciative or insightful or, 'likes' it, you'll be happy forever, even though you'll want more. Good luck to all you hesitating writers out there."

With that, he walked across the lot and into the bank, check in hand.