COVID hit just as the industry was gaining steam, forcing new business owners to adapt in ways that industry experts say are likely to stick. 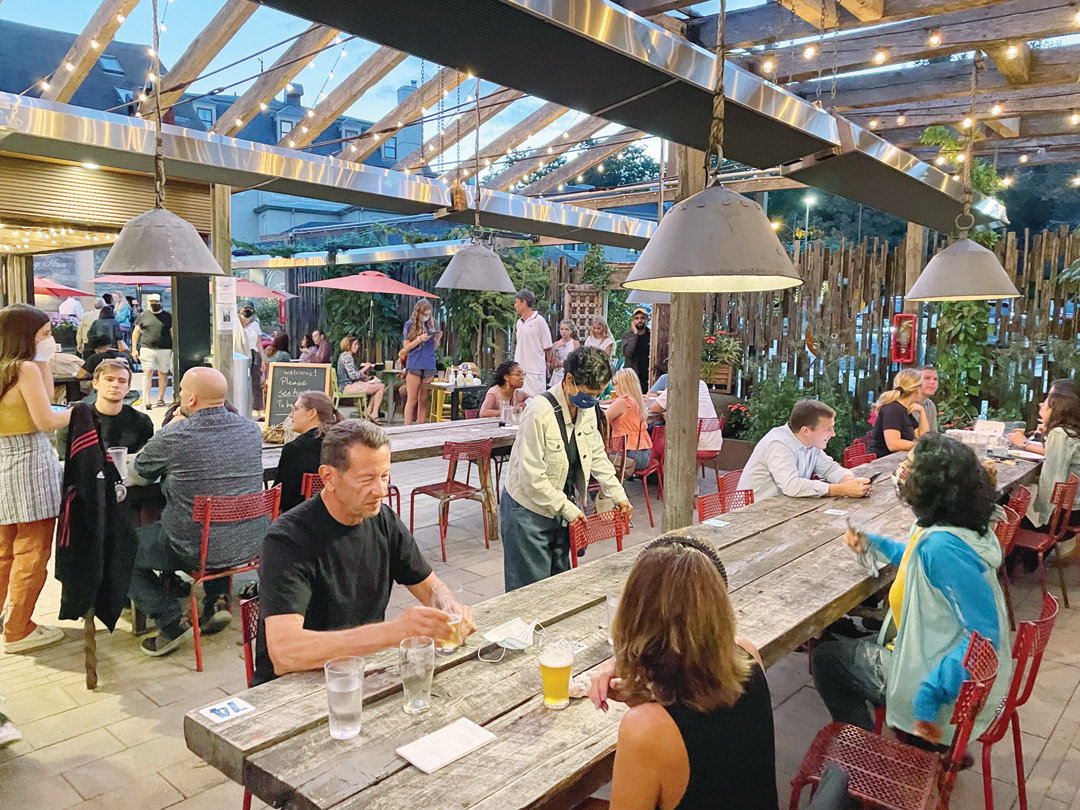 We have been able to withstand so much adversity. We have learned a lot and have become better operators.”
Lindsey Pete, co-owner of the Chestnut Hill Brewery
By Barbara Winkelman, Carla Robinson and Tom Beck

As Philadelphia lifts its mask mandates and business begins to return to normal, the region’s homegrown beer industry, which now includes a dozen breweries and taprooms, is now beginning to stride into full recovery.

And it may even come back stronger. COVID hit just as the industry was gaining steam, forcing new business owners to adapt in ways that industry experts say are likely to stick.

Take Chestnut Hill Brewery. Like their restaurant cousins, that company bought heaters to mount above their outdoor tables. But it also ramped up canning operations and began selling takeout beer - something industry expert Don Russell said resulted in the happy consequence of a whole new outlet for sales.

“The pandemic was huge - it really shifted how breweries were doing business,” Russell said. “Now you’re starting to see a lot of these locally produced cans available to purchase in takeout stores like the Foodery.”

Wissahickon Brewery of East Falls owner Tim Gill Jr. agreed. “We quickly had to ramp up our canned beer program and then build an online store to give customers a way to browse and to make purchases,” he said. “In the beginning it wasn’t easy, but today we’re stronger because of it.”

Twisted Gingers, on the border of Roxborough and Manayunk, has been offering canned beer since the fall of 2020. It’s been so successful the company now sells at a second location, the Flourtown Farmers Market on Fridays and Saturdays.

Chestnut Hill Brewery co-owner Lindsey Pete summed up the general feeling among regional brewers we interviewed for this story when she said: “We are optimistic about our future because we have been able to withstand so much adversity. We have learned a lot and have become better operators.”

It didn’t happen right away. They had to survive the initial crisis long enough to be able to get their canning operations going.

“One of the biggest changes that has kept us afloat is our decision to install outdoor heaters in our beer garden. They are extremely powerful and make our guests feel comfortable, even when it is 30 degrees outside,” Pete said.

Not everyone had that option. Jason Fehon, co-owner of Bill’s Best Brewery in Glenside, had no outdoor space to work with.

“We did struggle a little bit, but we were still selling a decent amount of beer. People came by and bought four packs and growlers, and that kept us afloat,” Fehon said.

But they, at least, were able to start canning right away.

“We were about to release our first beer and four packs in 16-ounce cans (when COVID hit),” Fehon said. “It was a good coincidence that we had started to do that; it helped us especially.”

Bill’s Best eventually opened an outdoor space in May of last year. “That has been tremendously helpful,” Fehon said. “Things have been really good ever since.”

Then there’s Fat Lady Brewery of Manayunk, which opened in the fall of 2021, right during the thick of the pandemic. It’s now about to launch its first canned beer.

“It's an American Pale Ale called ‘Giant Jim,’ named for the tallest man in the world during the early 1900s.” said owner Jane Lipton.

According to Russell, the industry began taking off in 2016, when changes to state law meant that breweries could start selling their product right out of their brewing facilities. A few years later, breweries got another boost thanks to industry lawyers who found a loophole in the law that meant they could sell directly from their warehouses as well as their brewery facilities. They were allowed to sell from as many as three of those, and there was no restriction at all on what a “storage” facility needed to look like.

And that’s what we now call a taproom. Unlike a brewery, where they make the beer onsite, a taproom is technically a beer  “warehouse” - which just happens to have the convivial atmosphere of a bar.

“It meant that you could open up a bar fairly cheaply - at least for a lot less than what it would cost you to buy a liquor license,” Russell said. “All of a sudden you began to see all these taprooms opening up.”

Breweries and taprooms began popping up all over Pennsylvania, especially in the suburbs of Philadelphia. There are six in downtown Phoenixville alone.

It's not just the beer

Food, it turns out, is also a big part of the appeal of breweries and taprooms, as is a sense of community that local entrepreneurs tend to bring to their business.

At Twisted Gingers, their artisan pizza is just as popular as their beer. The key is to use fresh vegetables and a healthy serving of meat, said owner Mark Mayer, who also mixes his beer into the dough.

“I realized that I needed a second audience to survive this neighborhood,” Mayer said, “so that’s where the pizza program comes in.”

At Mount Airy’s Earth - Bread + Brewery, the flatbreads are also made from fresh, local or regional ingredients from Weavers Way Co-op and other area growers. Owners Peggy Zwerver and husband Tom Baker have made sustainable practices and support for the local economy a central part of their business.

After brewing the beer, for instance, they send their spent grain to W.B. Saul High School where it is composted, or used as cow feed.

And at Bill’s Best Brewery, which is named for Bill Fehon, who died of a rare form of dementia at the age of 55, son Jason and his mother Diane donate part of their proceeds every year to the Association for Frontotemporal Degeneration (AFTD), an organization based in King of Prussia that helped the Fehon family navigate Bill’s illness.

“We really want to make sure that the business thrives…and that it's going to keep increasing,” Fehon said. “It's a monthly payment that we send them, and we feel really good about it.”

All this is a reason breweries and taprooms have become so attractive to civic leaders who are interested in revitalizing their central business districts.

“It used to be that municipalities were likely to push back against new breweries opening up,” Russell said. “Not anymore. I get contacted all the time by town leaders, asking me if I know anybody who wants to open up a brewery,” he said.

The breweries do create jobs, Russell said. But more than that, they help communities nurture a “cool factor.”

“More than anything else it creates interest in individual towns and neighborhoods,” Russell said. “They bring people together, and they create community.”

Ambler, for instance, has two breweries right on the main commercial street, and a third just off it, Russell said.

And he thinks that Northwest Philadelphia could definitely support more.