Local rape survivor will discuss her new book via Zoom

Laura Levitt, a Germantown resident since 1992, was raped in November of 1989, and the resulting trauma remains with her to this day. In fact, she has written a book about the incident and its …

Local rape survivor will discuss her new book via Zoom 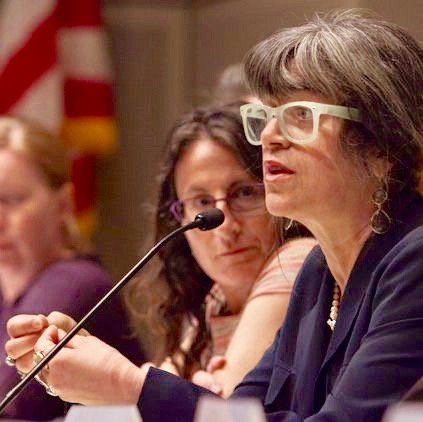 Levitt (front) is seen here during a summer workshop at the U.S. Holocaust Memorial Museum in the summer of 2014. The woman behind Levitt is Brett Kaplan, professor at Comparative and World Literature at the University of Illinois and former director of their Jewish Studies program.
Posted Wednesday, November 4, 2020 10:29 am
by Len Lear

Laura Levitt, a Germantown resident since 1992, was raped in November of 1989, and the resulting trauma remains with her to this day. In fact, she has written a book about the incident and its aftermath, “The Objects that Remain” (Penn State University Press), which will be released in November and which she will discuss via Zoom on Monday, Nov. 9, 7 p.m., sponsored by Big Blue Marble Bookstore in West Mt. Airy.

Levitt is a Professor of Religion, Jewish Studies and Gender at Temple University, where she has chaired the Religion Department and directed both the Jewish Studies and the Gender, Sexuality and Women’s Studies Programs. She has been a professor since 1992. In addition to her latest book, Levitt is the author of “Jews and Feminism: The Ambivalent Search for Home” and co-editor of “Impossible Images: Contemporary Art after the Holocaust “ and “Judaism Since Gender.”

“This book was emotionally and conceptually challenging to write,” Levitt told us in a recent interview. “It has been an over 10-year obsession and honestly, letting it go was hard … It has been a constant companion. This was a hard book to write, but it was the book I needed to write. It took me some time to really own the fact that this book was about me. I needed to tell my story. I needed to help readers appreciate that my rape is what brings the different strands of this book together.”

As horrific as the crime was for Levitt, it was exacerbated by the fact that the rapist was never caught. “The case was closed before it was ever opened,” she said, “despite my reporting it to the police and undergoing a rape exam. There was no investigation. And my evidence, including my rape exam, was, it seems, never processed. I write about all of this in the book.

“I believe that art, poetry, photography, writing — creative and scholarly expression — are important ways we can engage in doing justice to our experiences of violation. We do this outside or alongside the criminal justice system. For many of us, this is what we have; we do not have recourse to the law. And I feel strongly that sharing our stories matters. Such telling and sharing provide company for so many of us who have experienced violence, trauma and loss. My book pays tribute to writers and artists whose works offered me such abiding company. These include most especially the poet and writer Maggie Nelson and the potter and writer Edmund de Waal.”

Levitt, 60, grew up in Dover, Delaware. She earned a BA from Brown University in Religious Studies, an MA in Jewish Studies from Hebrew Union College, Jewish Institute of Religion, and a Ph.D. in Religion with a certificate in Women's Studies from Emory University.

In addition to what I would think would be the therapeutic aspect of writing this book, Levitt hopes it will resonate with readers. “For me, writing is how I come to know what I feel and think. It is a process. And my hope is that my book might provide some company for other people who also live their lives after trauma, violence and loss. And, more specifically, my story might speak to others who have experienced sexual violence.”

Since Levitt's doctorate degree is in Religion, I wondered if her religious beliefs helped her deal with the trauma of her rape and its aftermath. “As I write about these matters in the book,” she replied, “my religious convictions changed. Over the course of these many years after I was raped, my position has shifted. In this book, I come to a different kind or reckoning and in some ways a different kind of faith.

“This was a kind of surprise. I was struck by the power of once ordinary objects that become something else in the face of violence. Part of the book is about how we engage with these objects in our afterlives, after these ruptures of trauma, violence and loss.”

On another subject, how has the pandemic affected Levitt's life? “It has been a challenge to spend my days at home in front of my screen. I miss coffee shops (where I wrote so much of this book), and I miss being in the classroom with my students. I also miss seeing my 94-year-old father.

“We meet regularly each weekday on Zoom, but it is not the same. I have visited outside of his window at his assisted living facility in Delaware, but this too is quite difficult. And I miss already going to conferences and professional gatherings and getting away on vacation.”

To register for the Nov. 9 Zoom event, visit bigbluemarblebooks.com/events. Len Lear can be reached at lenlear@chestnuthilllocal.com